Red hair. TCU quarterback/soon-to-be NFL draft pick Andy Dalton has it, and it reportedly got one coach to thinking.

"Has there ever been a red-headed quarterback in the NFL who's really done well?" the coach asked, according to Sports Illustrated's Peter King. "It sounds idiotic, but is there any way that could be a factor?" 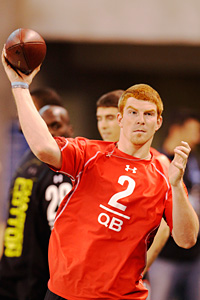 Page 2 has some answers.

"There is nothing whatsoever in our work that would suggest that redheads cannot be star athletes, nor is there anything in the literature," said Daniel Sessler, professor and chair of the Department of Outcomes Research at the Cleveland Clinic.

Sessler would know. He and colleagues conducted a 2009 study that showed that redheads, in general, are less responsive to local anesthetics and therefore more sensitive to (and fearful of) dental pain.

But, Sessler said, this doesn't stretch to sports.

"First, the effect is relatively small, and secondly, football players presumably are not in pain most of the time," he said. "And pain can be treated."

What about personality stereotypes? Aren't redheads -- who make up less than 4 percent of the population, according to estimates -- hot-tempered? Could we find Dalton throwing more headsets than touchdown passes in his NFL career?

"That's an urban legend that's been kicking around for decades," Sessler said. "I'm not aware of any of it that's been supported."

Indeed, there appears to be no studies linking hair color and personality -- unless you're looking at a Clairol survey.

In the end, Sessler's initial claim seems to be correct: There are plenty of redheaded athletes. The website Raising-Redheads.com keeps a list, which includes current ones such as snowboarding uber-star Shaun White, hockey's Sedin Twins and the unmistakable Brian Scalabrine, plus legends like Boris Becker and Rod Laver (tennis), Bill Walton (basketball) and, of course, the football player named Harold Edward Grange, (aka "Red").

And as for that first question asked by the coach, there indeed has been a successful redheaded quarterback.

His name is Sonny Jurgensen.

So much for red hair being a red flag.