Going toe-to-toe with a sporting legend

STOKE-ON-TRENT, ENGLAND -- Not only has Alan "Nasty" Nash won eight world toe wrestling championships, he can also crack eggs between his toes and hypnotize chickens.

Nasty, from Great Britain, first captured the World Toe Wrestling Championship title on his first try in 1994, and has been dominating the toe-tangling sport ever since, with an occasional challenger rising up. The objective is to pin the competitor's foot on the platform known as the toedium in a best-of-three match, alternating feet. It was invented in the 1970s when regulars at a Derbyshire pub wanted to invent a sport at which they could win. 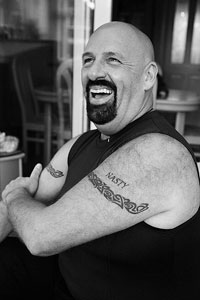 Nash, the bald beast, suffered four broken toes in the semifinals in 1997, rested his foot in an ice bucket, and went on to win the gold after simply snapping the toes back in place like Legos that popped off the board.

"I just don't like losing," he said. "And I'm very patriotic. I worry about the title going overseas." Nash has competed in Italy, Spain and the United States.

He works a 12-hour day as a product specialist at a construction machinery company, then hits the gym for two hours with the help of a personal trainer to build shoulder and back muscles -- "what wins you matches" -- as well as 200 repetitions of 500-pound toe presses to build calf and toe muscles.

His titan toes led him to another world record: breaking 49 eggs in one minute between his toes. Any other special talents?

"I'm a chicken whisperer," he said frankly. After scanning his face for signs of joking, I found nothing.

"Twenty-two in two minutes," he said of getting chickens to be still, gesturing how he runs his hand down their head. "I found out I was good at it when I owned my own chickens. So now I have to practice when I take my grandson to the park, but then all the small kids are crying, 'Mummy that the big bald man killed all the chickens.'"

He's a hard-core carnivore, maintaining a strict diet of only meat and wheat. "I don't eat fruit or vegetables," he squawked. "If it was meant to be eaten, it wouldn't be buried in the ground."

The 51-year-old father of four spawned "Toerannosauras," his 22-year-old son Aaron, who is gaining traction in the toe-wrestling world.

"Let's just say in the next couple of years, the presumed extinct dinosaurs are going to be making a massive comeback," Aaron warned.

At the 2011 championship in Wetton, Staffordshire, Nash lost to archnemesis Paul "Predatoe" Beech (formerly the "Toeminator"), but it wasn't a clean fight, Nash claims.

"The whole day was a farce," Nash scoffed. "Predatoe is the only one to beat me; he cheats all the time. He only beat me once fair."

Nash alleges illegal moves and says Predatoe's nonwrestling leg dropped on the floor (it must stay suspended above the toedium).

"Sorry to rabbit on like some sore loser, but everyone who watched the match will back me up," he assured. "I don't mind losing if it is genuine. Like I said to Beech after, there's winning and there's knowing you have won. He couldn't look me in the eyes." 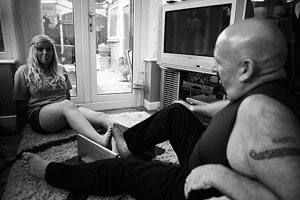 Eli Pauline Ohren Katie Barry gets ready to get schooled at toe wrestling by a legend.

When you're in the presence of greatness, it's natural to wonder how you'd compare. It was foolish of me to think my strong will to win could surmount Nash's tough-guy toes, but I had to give it a shot.

He wiggles around for a better grip and an electric shock of pain shoots up my leg, sizzling up my spine, and exits my mouth in the form of a blood-curdling scream that shakes everything hanging on his walls.

"Why are you doing that?" he quipped, as I nursed my unresponsive toes. "We haven't even started yet."

I lost over and over again, until I picked on someone my own toe size: my twin sister. When we were told to "toe for it," we hovered around the center, swaying, grunting and trash-talking until she conceded. On both feet. We joined forces and challenged Nasty, one on each foot. Even that couldn't throw him off his game.

"Mick 'Reaper' Grimmett knelt down and sucked my toes, just to put me off [prefight]," Nash recalled, grimacing. "It didn't really. He wasn't too happy after because he thought he had me distracted. He still competes. We met in the final again in 2010, but he didn't try it again."

Katie Barry is a freelance writer in New York. She can be reached at LadyKatieBarry@gmail.com.