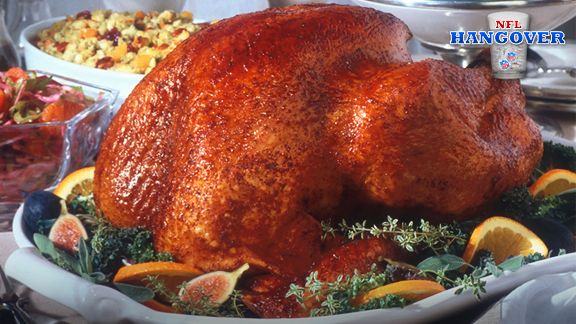 NFL football and Thanksgiving are inextricably linked. Football games dominate the television on Thanksgiving and even when you're called to the table or are talking with your family, your mind still often wanders to the action on the screen. But remember, you can still celebrate the holiday while keeping your thoughts on football by knowing the NFL equivalents to some Thanksgiving staples.

Stuffing is a bunch of random, unidentifiable ingredients that somehow tastes pretty good all mixed up together. Stuffing is the 49ers' defense.

Usually someone opens up a can, dumps the contents in a bowl and you're expected to eat this disgusting concoction. Yet because it's Thanksgiving, tradition says you eat cranberry sauce every year no matter what. But this year, someone comes along and makes real, homemade cranberry sauce and … you know what? It's actually not terrible! It's not great, but it's not nearly as awful as what you remember from past Thanksgivings. Cranberry sauce is the Detroit Lions.

They're green, they're not that good and they can make you gassy if you eat too much. Something else that is green, not too good and can give you digestive problems if you root for them is the New York Jets. Plus, Mark Sanchez's arm has been compared to a pea shooter and Rex Ryan is kind of like the Green Giant if the Green Giant cursed at plants to make them grow. "I told everyone you were going to win Biggest Bean at the state fair, now grow #^%&*#$!"

It comes out first and it's fresh and hot and pretty good. But if you eat too much, you fill up and don't have room for anything else. The Giants open every season much the same way, then they quickly fill up on wins and spend the latter part of the season and the playoffs asleep on the couch.

It looks like it might be as good as turkey. Maybe even better. You know, this could be the intelligent form of turkey! We're onto something here! And then you take a few bites. Hmm. A few more. Oh, no. No no no. This is awful. Just terrible. How much did we pay for this? WHAT? We got ripped off! Ryan Fitzpatrick is Tofurky.

"That offends my sports sensibility, to call a quarterback a game manager. There's a manager in baseball, but if you're going to make a football analogy, a player to another sport like baseball, then the quarterback's more like the pitcher. That just offends my sports sensibility." -- Jim Harbaugh, 49ers head coach, when asked postgame about Alex Smith's "game manager" tag.

Hmm. It seems Harbaugh thinks the football term "game manager" is a reference to a baseball manager, instead of a term for a quarterback who manages a game. That offends my word meanings sensibility.

But to Harbaugh's greater point, it seems he's trying to say that Smith is more involved in the outcome of a game than a manager. He's a pitcher. Maybe not a great pitcher. Maybe not a hard thrower. But a pitcher who goes out there, tries not to make a ton of mistakes and gets wins by filling a position and allowing his more talented teammates to do the heaving lifting.

So Alex Smith is not a game manager; he is Tim Wakefield. Great job Wakefielding the 49ers to another win, Alex.

With 13 yards on 12 carries, Chris Johnson averaged 1.1 yards per carry in Tennessee's loss to Atlanta. It's his third game of the season averaging fewer than 2 yards a carry and his sixth with fewer than 3 yards a carry. No one has ever done a better job at laying the groundwork for a Comeback Player of the Year award.

"Why are you doing this to me? I'm a good person."

Give us 10 clicks, and we'll give you 10 laughs ... or your money back!
DJ Gallo's NFL Hangover photo gallery

"I'll stop sacking you if you stop doing that with your face."

"Take this football and promise me that you'll never let any of our other quarterbacks throw it. Promise."

"OK, I'm just going to take it for a few feet and then you can have it right back."

"Hope your thumb is OK. But not really, of course."

Pat Shurmur, head coach, Browns: "I'm sorry, but your game was too ugly to watch again. Could you tell me who won and run through some key moments in the game for this recap I am contractually obligated to write? Thanks."

Jim Harbaugh, head coach, 49ers: "Do you ever worry that your defense could get a reputation for being overly cruel or mean-spirited considering some of the teams you play against in your division?"

Norv Turner, head coach, Chargers: "Wait … you're doing your news conference? Are you sure you didn't get fired? We can wait if you want to go check."

Colts: Learning about the future of the franchise via Twitter.

Steelers: Trying to get pirated feeds of NFL games.

Texans: Getting used to all of their play calls having "bros" added to the end of them.

Five Things We're All Thankful To Be Able To Think

1. Right or wrong, Jay Cutler's reputation took a huge hit from the NFC Championship Game last year. Now it seems there's nothing he can do to shed the "soft" label. Before all the details of his thumb injury even came out, Cutler was already being ripped on Twitter. Just as a sociological experiment, Cutler should fake his own death. "Jones_Drew32: Cutler's missing a week due to decapitation??? That's so like him. SMAH. (shaking my attached head)".

2. Ravens receiver Torrey Smith got pulled down by his hair against the Bengals. Old-timers like to talk about how tough football was back in the olden days, but how many guys back then got tackled by their long, flowing, impeccably styled and undeniably pretty hair? That's right: none. Guys like Jim Brown and Dick Butkus didn't even have the guts to grow lady hair. Football players are much tougher today.

3. You have to admire what Carolina Panthers quarterbacks coach Mike Shula is doing. Loyal to Alabama to the core, he's making former Auburn star Cam Newton worse each week. It might be the best prank ever pulled in the history of the Alabama-Auburn rivalry.

4. So Tim Tebow had Sunday off. I wonder what he did.

5. By the way, if Tebow is a bit too squeaky clean for your liking, consider rooting for new Chiefs quarterback Tyler Palko. He's also left-handed and has an unorthodox delivery, but instead of saying "God bless" to a national TV audience, he's more likely to drop an F-bomb, as he did at Notre Dame in 2004. He's like Tebow if Tebow's parents were sailors instead of missionaries.