Bob Hamman is willing to bet you won't sink the hole-in-one. Don't take it personally: It's his business.

By Matt McCue | ESPN The Magazine 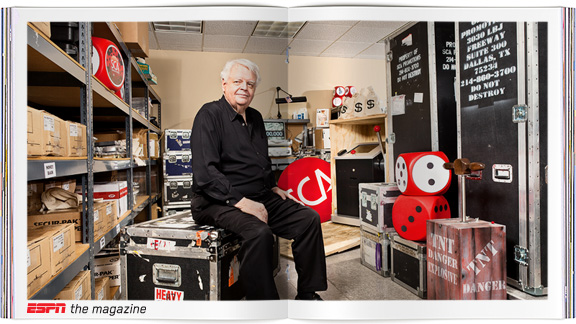 Jeff WilsonEnticed by a pop-up ad to crack the vault for the chance to win $100,000, today only? Hamman is likely the guy backing it.

This story appears in the March 5, 2012 "Analytics Issue" of ESPN The Magazine. Subscribe today!

Editor's note: Last Sunday, during the New York Knicks game against the Dallas Mavericks at Madison Square Garden, 21-year-old Mike Sapraicone of Long Island beat the 100-1 odds and drained a half-court shot to win a KIA Optima in a third-quarter promotion. He also took home $1,000 for qualifying, which he earned by sinking five free throws in 30 seconds. It was a rare loss for SCA Promotions, the insurance company that covered the prize package and is the subject of this story.

IN THE SPAN OF TWO MINUTES, Paul Choez has gone from being just another Orlando Magic fan at the Amway Center to the main event. Moments ago, Erin Daniels, a Magic exec, approached him at his seat in the terrace level and told him he'd been randomly selected to participate in a third-quarter shooting promotion. The prize: a $27,000 car. Now Daniels is leading Choez through the underbelly of the arena. "This is insane," says the 27-year-old, furiously texting everyone he knows.

Daniels asks Choez, a season-ticket holder, if he's ever played pro ball or if he's played on a college or high school team in the past five years. If he has, he's ineligible to participate. Choez, a soccer enthusiast who hasn't picked up a basketball in months, shakes his head no, and they keep moving, closer and closer to the court. Standing at the mouth of the tunnel next to a group of Magic Dancers, a blonde catches his eye.

"You got this. You excited?" she asks, smiling.

"You good at basketball?"

A Magic representative wearing a headset rushes over to Choez. "You're going to have 25 seconds to shoot as many free throws as you can, and you have to get your own rebounds," he explains. "If you make three free throws, you'll be awarded one untimed half-court shot. If you hit the half-court, you'll win the contest." Choez listens, his hands already dripping wet, as another Magic staff member films the conversation, documenting that he hears, and agrees to, the terms. When a contract is shoved in his face, he grabs the clipboard and signs it without a second thought. Then somebody yells, "Get him a basketball!" Choez squeezes it tightly, dribbles hard against the concrete floor and throws it against the white brick wall to loosen up. He's not allowed to take any practice shots -- another term outlined in the contract. He must go into the event cold. The seconds tick toward the end of the third quarter; Choez will carry the crowd through the timeout. Thunderous noise bounces off the walls of the cavernous arena. The organ plays the familiar tune to the rhythmic chant, "Let's Go Mag-ic!" Bump! Bump! BumpBumpBump! When the buzzer sounds, the announcer introduces Choez, who eases onto the court to rousing applause. The fans have no idea who he is, and they won't remember him in five minutes, but right now they love him. Right now, every fan in the building is rooting for Paul Choez to take down the house.

THE HOUSE, in this case, is Bob Hamman, the grizzled 73-year-old who runs SCA Promotions, the world's largest insurance provider for sports and casino promo contests. From Hamman's perspective, this is a good event for

Since Hamman founded the Dallas-based company in 1986, SCA has grown into the world's go-to insurer of stunts that give fans the opportunity to win piles of dough if they make a hole-in-one, kick a field goal or sink a half-court shot. SCA determines the odds for each contest and charges event sponsors a fee based on the probability of someone succeeding, prize value and number of contestants. If the contestants win, SCA pays them the full prize amount. If they don't, SCA pockets the premium. "The primary distinction between us and [traditional] insurance businesses is that they restore something economically when something bad happens," Hamman says. "When you put on a promotion, you're simply taking a position on the likelihood of an event occurring."

HAMMAN IS a deep thinker, the king of the long pause, long enough that you often wonder whether he's still on the other end of the telephone. In the 1950s, he enrolled at UCLA five different times but spent most days in the student union, learning about probability and human behavior while playing bridge. He eventually dropped out of college for good and started his own insurance company, and he has spent the past half-century among the top-ranked bridge players in the world. When Bill Gates and Warren Buffett want a game, they call Hamman, who says of his off-and-on brainy partners: "They are not in my league. It would be like me trying to race Usain Bolt."

When you put on a promotion, you're simply taking a position on the likelihood of an event occurring.

But although he might not share their bankrolls, Hamman does share their math-whiz perspective. He views the chances of making a standard free throw, for example, like a ballistics problem. "You're dealing with elevation, azimuth and the required force behind it," he says, as if any old rec leaguer

In the mid-1980s, when Hamman was first asked to insure the cost of a hole-in-one promo, his method was more, as he describes it, "SWAG. Scientific wild-ass guess." After that contest, recognizing a niche in the market, he started SCA. He hired two employees and in 12 months grossed $100,000. Now Hamman is considered the promo-insurance-biz grandfather, with SCA employing about 70 people scattered in offices from London to Calgary to Dallas, covering everything from golf to hoops to cricket and generating $30 million in revenue in 2011. The sports division, which covers events like half-court shots, makes up about 30 percent of the business. The remaining 70 percent focuses primarily on marketing promotions for casinos and retail stores. All told, his company is behind an average of 500 to 700 sports contests a year. David Poteet, vice president of the insurance company J. Smith Lanier & Co., calls SCA the New York Giants of their industry. "Bob Hamman is one of the smartest guys you will ever talk to," says Poteet, who's worked with Hamman for the past 13 years. "When you're talking about an actuary, he is one of the best."

But even for the best, there have been big losses. Like the 72-year-old man who worked in the carpet-laying biz and won $250,000 during an NBA Finals promo in 1998. He had been given five chances to hit a three-pointer. Shooting granny-style, he clanked the first one and then nailed his second shot.

And there have been big frauds. "We had one guy, a Russian immigrant who

But the odds are always in Hamman's favor. In the past 26 years, SCA has collected fees on $10 billion worth of theoretical risk; of that, it's paid out $170 million.

ADAM WALKER, the company's senior account executive and a former Harvard basketball player, calculated the odds of Paul Choez winning. Using SCA's internal data and records from previous basketball-shooting promotions, he figured out how many free throws someone could take in 25 seconds while retrieving the rebounds (five or six), and he concluded that 50 percent of contestants could make three of those. Next he determined the probability of making the half-court shot is 50-1, or 2 percent. So if 50 percent of contestants can make their free throws and only 2 percent can make the half-court shot, he figured Paul Choez had a 1 percent chance of driving home in a new car.

SCA typically charges anywhere from 3 percent to 15 percent of the cash value of the prize, depending on its evaluation of the odds. The more likely an event is going to happen (5 percent is considered a threat), the closer the fee is to 15 percent. The hole-in-one is the most difficult. The likelihood of a random fan sinking one at 165 yards is 0.0083 percent . It's a favorable play for SCA, whereas basketball shots and field goal kicks present more risk. For example, if the contestant has a decent leg, he has a 5 percent chance of sticking a ball through a regulation-size goalpost from 40 yards away. According to Hamman, the ideal participant across the board is someone the

In the case of the Magic event, the $27,000 purse is relatively low, and SCA stands to make only a grand or so on the fee. But the Magic are holding six of these promotions over the course of the season, all high-profile events, and SCA has landed the contract to cover all six. "We will back almost any promotion in which the odds favor us," says Hamman, "and we can pay off the prize."

CHOEZ STEPS onto the court, keenly aware of the 18,952 pairs of eyes on him, and the Magic's emcee joins him under the glaring lights. "We've got Paul with us here," he barks into the microphone, "for this once-in-a-lifetime opportunity." The crowd cheers as Choez toes the free throw line and the countdown begins: three, two, one. "Paul's first shot is up ..." The ball careens off the backboard, and Choez chases it down. He returns to the stripe, his smooth-soled dress shoes slipping on the court as he launches the next two shots, both heavy-handed misses.

Choez finally sinks his fourth attempt but then clanks the final two before the buzzer ends the game. He doesn't even get a chance at the half-court shot. He returns to the tunnel shaking his head. "I could have made another one at least," he says, as if he barely missed winning the free car. He checks his phone. His sister, who was sitting courtside, already has emailed him a video of his moment in the spotlight.

Back home in Dallas that evening, Hamman didn't think twice about Choez making the shot. In his mind, what makes any event a success, win or lose, is how the audience reacts. "The objective is seldom just to award a prize," he says. "It's to have the crowd believe it is possible."

Sometimes, he even roots for a winner. 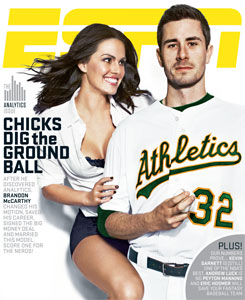 FEATURES IN THE "ANALYTICS ISSUE"