WrestleMania winners in the cards

As the hours until sports entertainment's showcase event, WrestleMania XXVI, melt away, wrestling fans aren't letting up with the speculation of who'll win which matches on Sunday inside the University of Phoenix Stadium in Glendale, Ariz.

Only one person knows -- that's WWE Chairman Vince McMahon -- and he's not talking, so we decided to do the next-best thing. No, we're not scouring the dirt-sheets for the latest rumors or scoops. We're turning to the 2010 WWE Slam Attax trading card game that Topps released in mid-February.

Yep, we're going to play the game (sorry, Triple H) and see who wins based on the cards from the popular gaming line that has flexed some serious muscle for Topps in several sports. 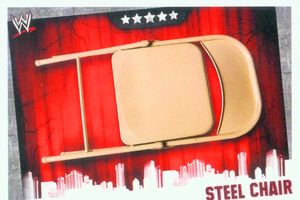 Meanwhile, a Wall Street Journal story this week noted that Attax has accounted for 25 percent of Topps' overall revenue and profits since its launch. That's beyond unbelievably hot.

Attax will meet its match on Sunday in WWE's hottest event -- and it might also be rivaled by the Arizona heat, though the forecast calls for temperatures to be in the low-80s. (We expect the stadium's roof to be open.)

But enough of our Al Roker routine -- here are some bold WrestleMania predictions found strictly in the cards where each wrestler has two ratings, a defense code and an attack code. (Obviously, the higher number wins and the only variables are who goes first -- and whether a player uses a foreign object. Yes, even the steel chair has a trading card now …)

The Undertaker vs. Shawn Michaels

The showcase match at WrestleMania XXVI on Sunday is between two veterans -- Undertaker, who has never lost in 17 'Mania matches, and Michaels, who nearly beat Undertaker last year and promises to retire if he loses. This one isn't nearly as dramatic on cardboard as it will be in the ring. Get the Barcalounger ready. Undertaker wins, 92-83.

Everybody knows who John Cena is these days. If they haven't, they've been living under The Rock, err, a rock. Cena is the face of today's WWE, a star who is eyeing his seventh reign as WWE champ on Sunday. If we play our special WrestleMania bonus card (found only in certain packs of Attax), then Cena just barely wins if "The Animal" attacks first. If Cena gets the upper hand first? He's champ no matter which card we use.

These former tag team champs aren't seeing eye to eye these days, and when it comes to Attax competition injuries don't matter. Edge's quick return from a legitimately torn Achilles tendon means nothing as he wins easily, 94-87.

On paper -- dirt-sheet, Wikipedia page, you name it -- this is a mismatch as Triple H is a 13-time world champion and Sheamus is a guy who's been around in the WWE since just last June but somehow won the WWE Championship and held it for two months. (How that happened baffled more than a few WWE fans. More on that later.) This one's a mismatch in Attax, too. Triple H wins easily, 94-51.

This might be the most closely contested fight of the night as one of the WWE's top heels, Punk, takes on the immensely popular masked star. If Punk fights first in Attax, he wins 90-84. If Mysterio attacks first, he wins 91-86. Could go either way on Sunday, too. 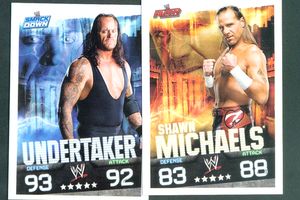 This triple-threat-match (first one with a pin wins) pits Orton (a multiple-time champ) against his former proteges, a pair of second generation stars. (For the record, all three of their fathers -- "Cowboy" Bob Orton, Dusty Rhodes and "The Million-dollar Man" Ted DiBiase -- appear in the Legends portion of Attax and Orton beats 'em all.) This one's not even close as Orton's WrestleMania bonus card carries a 101-101 code combination that trumps every single card in the game. Orton's standard card gets the job done, too, topping both DiBiase and Rhodes at 94-65-67.

Money in the Bank Ladder Match

This 10-man battle differs from the rest here as the stars have one mission -- climb a ladder in the middle of the ring and retrieve a briefcase hanging from a cable. Of course, in a match like this one, there's a caveat -- the ladders at ringside can be used as weapons. Of the competitors in this one -- Kane, Kofi Kingston, Evan Bourne, MVP, Christian, Dolph Ziggler, Shelton Benjamin, Jack Swagger, Matt Hardy and Drew McIntyre -- there is one clear favorite in Attax. That's former ECW champion Christian. Captain Charisma's 84 attack code is tops among them all, but there's a catch here. McIntyre is a newcomer who doesn't have a card and has had McMahon supporting him on Smackdown. We expect one of these two to win it for real on Sunday.

Both tag teams are newly formed, so neither appears in the tag-team portion of Attax, but all four combatants have singles cards. It's obvious who makes the difference in this one -- the 7-footer who weighs 485 pounds. Big Show can't be stopped and his 89 beats both Morrison's 77 and R-Truth's 68.

At age 64, McMahon takes on a real-life nemesis in Hart, who is returning to a WWE ring for the first time since a 1997 incident known in wrestling lore as "The Montreal Screwjob." At that time, McMahon changed the finish to a match, unbeknownst to Hart, stripping him of the championship while in his home country. While this no-holds-barred match may not be a classic, it's got plenty of baggage that will have to carry it. Neither Hart nor Mr. McMahon (as the chairman is known in character) has an Attax card.

Seriously, anything is possible when it comes to the WWE -- and we'll get proof of that on Sunday, no matter what Topps' cards have to say.

Chris Olds is the editor of Beckett Baseball magazine (and obviously is a WWE fan). Check out Beckett.com -- and be sure to get the latest news on sports cards and memorabilia at The Beckett Blog. You can also follow him on Twitter.