That means for the Lakers' Bonnie-Jill Laflin, her work is never done.

Laflin, a former cheerleader and television host, is the first female scout in the NBA and she is also the assistant general manager for the Los Angeles D-Fenders, the Lakers' developmental team.

Page 2 chased her down to ask 10 questions: 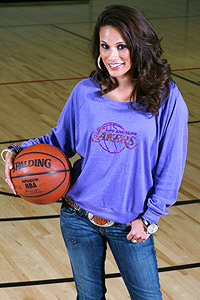 1. How in the world did you become a scout for the NBA and specifically the Lakers?

"I was covering the Lakers for KCAL/KCBS as a sports broadcaster and Jerry Buss wanted to add a female scout at the time. Buss was a friend of my father's and I've always looked at him as a father figure, and he allowed me to be a scout for a year. The team liked my scouting reports and decided to keep me on. I've been with the team for about 10 years now."

2. And you're the assistant general manager for the Lakers' developmental team, really?

"Yes I am. I really love working with the D-Fenders and watching these players develop and trying to make their dreams come true. I've been with the team since their inception in 2006 and I really enjoy being a part of seeing these players work their way up and hopefully play in the NBA one day."

3. You started out as an NBA cheerleader? How can that parlay into working in the front office?

"I've been a sports fanatic all my life and I was going to basketball games since the age of 2 and always knew I wanted my career to be in sports. So I started off in the NBA as a cheerleader and then went into sports broadcasting where I was really able to study the game more thoroughly and understand the game through conversations with players and coaches."

4. Be honest: If you weren't working for the Lakers, would you be a fan of theirs and why?

"Yes, of course. It's the best organization in the NBA. They have so much history. I love the old school Lakers with Jerry West, Magic Johnson and even my dog is named Wilt Chamberlain."

5. Is it hard to get people to take you seriously and more than just a pretty face?

"Yes, people always think I'm just a dumb model-cheerleader, but then they talk to me and realize I know the game; I'm credible and knowledgeable. I understand it's hard to believe a girl who has been a cheerleader and a model can know her stuff, but I do."

6. Someone told me you have a Super Bowl ring. What?

"Yes, I was a cheerleader in the NFL for the Dallas Cowboys and San Francisco 49ers. I have one Super Bowl ring from the 49ers in 1994 and four NBA championship rings from the Lakers."

7. You've dabbled in television and films. Is that something you want to eventually do?

"My love is sports, so whatever I might do in television and film there would have to be a sports tie-in."

8. What else do you want to do? I hear you did a campaign for PETA.

"Yes, I've done three PETA campaigns to promote anti-fur and vegetarianism. My passion right now is for my charity, 'Hounds and Heroes,' which is dedicated to lift the morale of our active, wounded and veteran military troops worldwide and to increase community awareness about the cruelty to animals. I've also been on six military USO goodwill tours to Iraq and Afghanistan supporting our troops."

9. So tell me the truth, do you wear a new outfit for each home Lakers game because someone might be taking your photo?

"Ha-ha! I wear a different outfit everyday regardless if I'm being photographed or not, but I'm most comfortable in a baseball [San Francisco Giants] hat and jeans and T-shirt."

10. How in the world do you have a hyphenated first name?

"My daddy wanted Bonnie and my mama wanted Jill, and my family is from the South so two names is pretty common."