It's a wonderful Yankee life

News item: Yankees general manager Brian Cashman will dress as an elf and rappel down a 22-story building as part of a holiday celebration in Stamford, Conn. "As an elf, you have to be willing to build toys, wrap presents, prepare reindeer for flight or rappel off buildings for Santa," Cashman said. "I take my role as an elf seriously because there are a lot of children out there counting on him."

'ELF 2: IT'S A VERY WONDERFUL YANKEE CHRISTMAS TO DIE HARD'

(SCENE 1: The front office at the new Yankee Stadium just before the winter meetings. The camera pans dozens of Yankees sycophants and assorted toadies chained to a workbench, where they scour scouting and financial reports on free agents. The camera stops at the end of the bench, where we see BRIAN CASHMAN. He is dressed as an elf and eating cookie dough and maple syrup while painting smiles on ALEX RODRIGUEZ bobblehead dolls. He turns to a YANKEES TOADIE.)

CASHMAN: Do you think the jolly fat man will visit the workshop today?

TOADIE: No, Sabathia is back on the West Coast.

Suddenly, the door opens ominously, and snow swirls into the workroom. THE ABOMINABLE STEINMONSTER enters, clutching a New York tabloid that reads: "JETER'S AGENT TO MEET WITH RED SOX." The staffers start sweating nervously. STEINMONSTER stomps to the end of the worktable and glares at CASHMAN.

STEINMONSTER: Cashman! How come Derek Jeter is still a free agent? And what the hell are you doing?

CASHMAN: I'm just making toys and learning to wiggle my ears so I can make children happy.

STEINMONSTER: Making toys and wiggling your ... ? Now listen, you're the general manager of the New York Yankees. The Bronx Bombers. The 27-time world champions. The greatest team in sports. You don't make toys. You sign the best, most expensive free agents there are. You don't make children happy -- you rip out their hearts and make them bawl like figure skaters by stealing away their team's best, most popular players. Which reminds me -- why haven't you purchased the entire state of Arkansas yet? We need Cliff Lee!

CASHMAN: I don't care whether we need Cliff Lee. I don't want to be a general manager anymore. I want to be an elf.

STEINMONSTER: Oh, well, if that's all -- AN ELF? You want to be an elf? Get this, everyone, Cashman wants to be an elf!

STEINMONSTER: Listen here, Cashman -- you're a general manager, and general managers sign free agents! Now, here's a cashier's check for $300 million! Get to the winter meetings, and don't return until you've re-signed Jeter, Mariano Rivera and Andy Pettitte and signed Cliff Lee and Carl Crawford. And then I want you to trade for Tim Lincecum and Albert Pujols!

CASHMAN: OK, but first I'm going to practice rappelling down the Steinbrenner plaque in Monument Park just in case I ever need to use a fire hose and a machine gun to escape down an elevator shaft while rescuing hostages held by European terrorists/thieves planning to blow up a Los Angeles skyscraper on Christmas Eve.

(SCENE 2: LaGuardia Airport. CASHMAN, still dressed as an elf, is with Yankees assistant traveling secretary GEORGE COSTANZA on their way to Orlando, Fla., for the winter meetings. As they head to security, CASHMAN hands GEORGE the cashier's check for $300 million.)

CASHMAN: The pockets in my elf tights aren't big enough for candy corn AND a wallet, so you'd better carry this. Just be careful. Mr. Steinbrenner gave that to me personally to sign all our free agents this winter.

GEORGE: No problem, sir. I'll just put it in my wallet.

(Because his wallet is crammed so thick, GEORGE struggles to remove it from his pocket. But eventually he does. He carefully inserts the check, and the two head to security. When they reach the front of the line, CASHMAN places a handful of candy canes, sugar plums and gumdrops in the tray. The TSA AGENT looks at him and shakes his head in disgust.)

TSA AGENT: Take off your cap and slippers and step through the scanner, Hermey.

CASHMAN: Actually, my name's Brian. And can I opt out for an enhanced pat-down? I like hugs.

TSA AGENT: Are you nuts? You think I'm going to run my hands up and down your little green elf tights? We may be in a bad recession, but they don't pay me enough to touch elf junk.

(CASHMAN skips through the scanner without problem, but the scanner beeps noisily when GEORGE tries.)

TSA AGENT: Remove any metal on you and your wallet.

(GEORGE once again tries to remove his wallet, but with the addition of the check, it is finally stuffed so thick that he can't get it out of his pocket. As the TSA AGENT grows angry and fellow travelers begin to complain, GEORGE eventually removes it by ripping his back pocket. The wallet springs open like a jack-in-the-box, and the $300 million check and all his credit cards flip out onto the floor. After 15 minutes, GEORGE at last gathers the contents of his wallet and passes through security. He and CASHMAN rush to their gate.)

CASHMAN: We're going to be late for the plane. Hand me the check -- maybe I can hire some reindeer and feed them unreality potion so they can fly us there.

(GEORGE searches his wallet but can't find it.)

GEORGE: I must have lost it back at security!

CASHMAN (quickly losing his elf persona): Are you kidding? That check was for $300 million!!! Why did I ever agree to rehire you?

(They rush back to security and search frantically for the check, but it is no use. It's gone. CASHMAN grabs GEORGE by the throat and begins strangling him.)

CASHMAN: Where's that money, you silly, stupid fool? Where's that money? Do you realize what this means? It means bankruptcy and scandal and prison! That's what it means! One of us is going to jail -- well, it's not going to be me!

(TSA agents rush to the scene, grab CASHMAN and pull him off GEORGE. They handcuff the two and haul them away.)

TSA AGENT: Congratulations, Hermey. You're now officially on Santa's Do Not Fly list.

(SCENE 3: CASHMAN and GEORGE walk out of a police station after posting bail, dejected. CASHMAN looks at a newspaper stand and reads the tabloid headline: "JETER, MO AND LEE CLOSE TO $300 MILLION DEAL WITH RED SOX!")

CASHMAN: Great. The winter meetings start tomorrow. Jeter, Rivera and Lee are going to sign with Boston. We're stuck in New York. We can't fly in a plane. And we've lost $300 million. I used to wish I was an elf. Now I wish I'd never been born.

GEORGE (thinking): Hmmm. I wonder what that would be like.

(GEORGE breaks the window of a nearby toy shop, reaches in and grabs an official Red Ryder carbine-action two-hundred-shot range model air rifle with a compass in the stock and this thing that tells time. He points the rifle to CASHMAN's heart and pulls the trigger. He misses CASHMAN's heart but nails his boss directly in the eye socket. CASHMAN howls in pain.)

CASHMAN: You shot my eye out, you moron! God, why can't I have Bruce Willis as my sidekick?

(CASHMAN collapses to the ground in pain and passes out.)

(SCENE 4: CASHMAN is dreaming. Or is he? He finds himself lying on a sun-drenched beach, a wave washing over him. A red-bearded prospector with sled dogs and a copy of "The Adventures of Tom Sawyer" helps him to his feet.)

CASHMAN: Who are you?

DRUNK: I'm Clarence Cornelius, your guardian angel. I'm here to show you what life would be like if you had never been a general manager.

CASHMAN: What the hell are you talking about? And where are we?

(CASHMAN looks across the beach and sees a fabulous, exclusive resort where dozens of active and former ballplayers sip $30 rum drinks from coconuts while supermodels rub sunscreen over their bodies.)

CASHMAN: That's Alfonso Soriano! And there's Milton Bradley. And Carlos Silva. And Mike Hampton and Denny Neagle. And Derek Bell. And Barry Zito. What is this place?

CORNELIUS: This is the island of misfit Yankees. All these players signed multiyear contracts for $60 million or more in silver and gold for the Yankees and performed terribly! Look, there's Mo Vaughn. The Yankees traded Jeter for him in 1998 and then gave him a $100 million contract.

CASHMAN: What do you mean, they signed big contracts with the Yankees? I didn't sign these guys as free agents. Well, maybe Carl Pavano and Kei Igawa, but not all the others -- we traded Soriano for A-Rod. The Steinbrenners wanted to sign some of them, but I stopped them. And I never traded Jeter for Mo Vaughn. We wouldn't have won all those World Series if I had traded Jeter.

(Extreme close-up of CASHMAN as the truth gradually dawns on him.)

CORNELIUS: You see, Brian. You really have been a wonderful general manager. Wouldn't it be a shame to throw it all away on this silly elf dream?

CASHMAN: But how can I be the general manager after losing $300 million? The Steinmonster will throw me in jail.

CORNELIUS: Oh, don't worry about that. Theo Epstein has the check. He was in the security line to get on the same flight, and he stole the check. He was arrested when he tried to cash it. And the TSA has cleared you to fly again. So what do you say? Are you ready to go to Orlando?

(CLOSING SCENE: The hotel of the winter meetings. JETER, RIVERA, PETTITTE, LEE and CRAWFORD are at a news conference announcing they have signed with the Yankees. One reporter is tweeting: "Yanks close to completing three-way deal for Mauer, Ichiro" while another tweets, "Epstein gets 30 years for check-cashing fraud!" The ABOMINABLE STEINMONSTER is proposing a celebratory toast among the Yankees toadies.)

STEINMONSTER: To Brian Cashman, the richest general manager in town! And remember, Brian. No owner is a failure, only general managers who sign bad contracts.

CASHMAN gazes toward at the hotel lobby and sees children in Rangers, Rays and Twins caps sobbing uncontrollably. The camera fades out as CASHMAN tosses his elf tights into a wastebasket and smiles with deep satisfaction.)

Here's how this game works. Each week you get a fragment from an old box score and must solve the mystery of which game it was from and why it was significant. This one has a difficulty rating of 7. Answer at the bottom of the column. 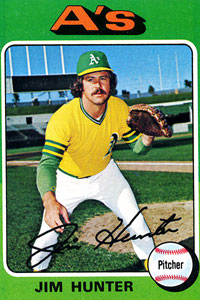 ToppsThe early bird got the wrong worm for Topps in 1975.

As the hot stove league heats up, here's a memorable card of Catfish Hunter (1975 Topps, No. 230). There's just one problem with it. Hunter didn't pitch for Oakland in 1975. That's because in mid-December of 1974, arbitrator Peter Seitz ruled that the Athletics breached their contract with the pitcher because of unpaid insurance policy payments and declared the 1974 Cy Young winner a free agent. He signed with the Yankees (who else?) two weeks later for $3.75 million over five years. After winning 20 games each of the previous four years (including 25 in 1974), Hunter won 23 games for the Yankees in his first season in New York and 17 games the next. He won 23 games the rest of his career and didn't throw a major league pitch after 1979.

If you recognized this as the box score from when Sandy Koufax pitched a perfect game, you're only partially right. Because Cubs starter Bob Hendley allowed only one hit, this game also set the mark for the fewest hits in a game (one).