The price for Prince Albert

Albert Pujols and the Cardinals have yet to reach agreement on a new contract, and it looks as though St. Louis' beloved first baseman will enter free agency in the winter. What kind of market will there be for one of the greatest, most consistent hitters in baseball history? A very competitive one, according to Off Base sources who assure me that virtually every team will bid for Pujols if he becomes a free agent ...

New York Mets: Owner Fred Wilpon's current cash-flow issues preclude the Mets from offering a multiyear contract of any amount. However, Wilpon says he can offer to invest the $16 million Pujols earns this season and guarantee a return of at least 18 percent every single season, which will give Pujols more than $1 billion within 30 years. And if the investment somehow "disappears" at that point, well, Pujols will be 62 and can start drawing social security.

Kansas City: The Royals will offer Pujols a deal that allows him to please the union and play in St. Louis. They will sign him to a 10-year, $300 million contract, then trade him to the Cardinals for prospects six months later when it looks as though the deal won't work out and the team thinks it needs to change directions yet again.

Philadelphia: The Phillies will simply offer Pujols the major league minimum but with the incentive of not having to bat against Roy Halladay, Cliff Lee, Roy Oswalt and Cole Hamels.

Washington: The Nationals will emulate Republicans and Democrats in D.C. by "listening to the people" and offering Pujols $300 million that they don't have, deferring all payments (plus interest) to the next owner.

Texas: The Rangers are willing to offer Alex Rodriguez's old contract to Pujols, by which they mean the $25 million they still owe A-Rod from the contract to which former owner Tom Hicks signed Rodriguez in 2000. They also are willing to give him Michael Young's locker, plus Young's jersey and all of Young's at-bats, all of which "we're sure Michael will be totally cool with."

San Diego: The Padres will replace recently departed first baseman Adrian Gonzalez by offering Pujols $200 million to spend the next seven years undergoing constant trade rumors and having his playoff hopes cruelly crushed in the last weekend of the regular season.

Pittsburgh: The Pirates will offer Pujols a 10-year contract guaranteed to always be exactly $1 more than what the rest of the team is making combined. Pujols will turn this down, naturally, because it will be far less than what every other team is offering him.

New York Yankees: The Steinbrenners will offer Pujols a 10-year, $500 million contract, then petition the league to add another designated hitter to the lineup, preferably for the shortstop by 2014.

Seattle: The Mariners will offer Pujols a 10-year, $100 million deal plus incentives of $500,000 for every home run that pitcher-friendly Safeco Field costs him each season.

Tampa Bay: The Rays will offer Pujols an eight-year, $250 million contract with the caveat that he must bring 25,000 of his closest friends to each game.

Oakland: Billy Beane will offer Pujols a three-year, $100 million contract, then trade him in the second year for a future Cy Young winner, two All-Stars, a Gold Glove winner, seven other prospects, a down payment on a new ballpark and a minority stake in an English Premier League team.

Toronto: The Blue Jays will offer Pujols a back-loaded 10-year, $400 million contract. Later, they will trade him to the Angels when he gets old.

Colorado: The Rockies won't offer Pujols a contract, but as soon as he signs somewhere, they will give Troy Tulowitzki another $134 million contract extension through 2030.

Anaheim: The Angels will offer Pujols a 10-year, $270 million contract and promise to change their name to the Los Angeles and Anaheim Angels of Albertville.

Boston The Red Sox will not offer Pujols a contract because they will have signed Adrian Gonzalez to an extension by then, bringing their payroll closer to $200 million. Boston fans will then whine about the way the Yankees are able to outspend everyone.

Cincinnati: The Reds will offer Pujols a seven-year, $200 million contract so that the next time they play Philadelphia in the postseason, they'll get at least one hit in a game.

Florida: The Marlins are preparing to offer Pujols an eight-year, $240 million contract and the assurance that he will be the first player unloaded in the fire sale after their next World Series title.

Chicago White Sox: The White Sox will consider offering Pujols a six-year, $190 million contract but will decide at the last minute that they don't need him, then watch Pujols sign with the Twins and lead Minnesota to the AL Central title.

Minnesota: The Twins will offer Pujols an eight-year, $190 million contract plus a batting helmet lined with bubble wrap and padded with goose-down pillows.

Detroit: The Tigers will offer Pujols a 10-year, $300 million contract, though, as with the standard Detroit baseball contract, it will not include medical coverage in case he develops lung cancer from manager Jim Leyland's secondhand smoke.

Baltimore: The Orioles will offer Pujols a nine-year, $270 million contract plus lucrative lifetime rights to sell barbecue sandwiches from his very own concession stand after he retires. To avoid infringing on Boog Powell's turf, however, Pujols will have to sell his sandwiches as a vendor while hiking up and down the stadium hollering, "Barbecue sandwiches, here! Get your piping-hot sandwiches!"

Houston: The Astros will woo Pujols by offering him a seven-year, $200 million deal and promising to never ever wear those rainbow jerseys again.

Milwaukee: The Brewers will pre-emptively combat charges that they aren't trying hard enough to keep Prince Fielder by not offering enough money to Pujols, either.

Arizona: The Diamondbacks will offer Pujols a six-year, $170 million contract but will defer all payment until they have finished paying Bernard Gilkey the deferred money they still owe from the contract he signed in 1999.

Cleveland: The Indians will offer Pujols a minor league contract because that's where they keep their best players.

St. Louis: The Cardinals, of course, also will try to re-sign Pujols. After failing to sign him to an extension before the season out of concern that he wanted more money for longer than they thought made financial sense, they will offer him much more money for more years.

Here's the deal. I give you a fragment from an old box score. You use your detective skills to figure out what game the box score is from and why it's significant. With pitchers and catchers reporting this week, consider this one a fundamentals drill. I give it a difficulty rating of 4. 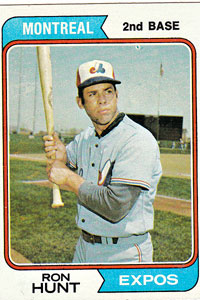 With a stance and grip like this (1974 Topps, No. 275), is it any wonder Ron Hunt relied on getting hit by a pitch as a key offensive weapon? Hunt set the modern single-season record for most HBPs in 1971 (50 and still the record), which brought his OBP to .402 that year. He finished with a then-record 244 HBP (later broken by Don Baylor and Craig Biggio, with Jason Kendall now 31 behind Biggio and closing in). But what I especially like about this card is the cartoon on the back that says Hunt loves bowling. The Dude would be proud.

• The Mariners announced Tuesday that Ken Griffey Jr. will be a special consultant for the team. I'm not sure whether that means he'll be responsible for teaching prospects the proper way to wear their caps backward or simply reminding fans of the 1990s, but it's good to know that he's back on speaking terms with the team. I also know that "special consultant" has to be the greatest job in baseball. All it requires is being a Hall of Fame-caliber player or popular ex-manager willing to hang around the batting cage at spring training, occasionally visit the team and its affiliates during the season, have people acknowledge your great career and generally get out of the house for a while whenever you get bored of playing golf. And you get paid for it! 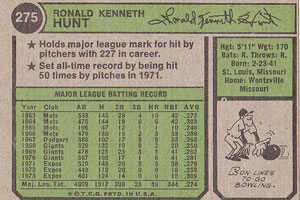 Topps When you're known only for the HBP, you definitely abide like The Dude.

• I got my 2011 Baseball Writers' Association of America card in the mail last week, and my number is down to 129. (Card numbers decline with seniority, and mine has dropped from the 700s, where I started in 1988.) The BBWAA card is like a Willy Wonka Golden Ticket in that it grants me entry to every major league ballpark. The drawback, however, is the photo also makes me look as though I weigh 350 pounds. My favorite story involving a BBWAA credential involves a writer who told me he showed up at an airport for a flight without his driver's license last year, but the TSA agent accepted his BBWAA pass as proof of identity. He swears it really happened.

• The exasperating issue with Ross Ohlendorf winning $2 million in arbitration is not his 1-11 record in 2010. Ohlendorf pitches for the worst team in baseball, and his teammates averaged just two runs per game while he was on the mound, so of course he's going to have a lousy record. What is outrageous is he did so despite pitching just 108 innings last year (and 176 innings the previous year). On the other hand, when a team is pocketing so much revenue-sharing money, it might be karma to get clobbered at arbitration. 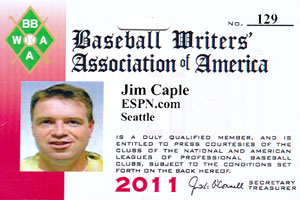 Jim Caple/ESPN.comIf you think your passport photo is bad, feel free to keep this image around as an ego boost.

• This has nothing to do with anything, but ...: Fans refer to the Orioles as the O's, the Mariners as the M's and the Athletics as the A's. But you would never consider referring to the Rangers as the R's, the Twins as the T's or the Yankees as the Y's. Just something to think about ...

• Over the weekend I saw "The Illusionist," which I enjoyed. It was just refreshing to see an animated movie about humans rather than animals/ogres/penguins speaking as though they were the hippest, most ironic, pop culturally aware college students imaginable. Plus, there was no attempt to make the animation look as though it was real rather than, you know, animated. It has the occasional breathtaking sequence but also a distinct artistic style and an old-school-animation feel rather than a computer-generated technique indistinguishable from any other computer-generated animation. That said, "Toy Story 3" is better.

You should have been able to recognize this as the box score from one of Johnny Vander Meer's two consecutive no-hitters. (He is listed as the pitcher in one lineup, and the totals show the other team did not have a hit.) The trick was knowing that this was the second no-hitter, not the first. The key was knowing that his second no-hitter was also the first night game at Ebbets Field, which you could determine by seeing in the box score fragment that this game was played in Brooklyn. Vander Meer was pretty wild that game -- he walked eight, including three in the ninth, when he loaded the bases before settling down to finish the game.