How dare you, Yankee fans!

Baseball released the first totals this week in the fan vote for the All-Star Game, and I hope the figures upset you as much as they upset me. After all, here are the leaders at each position in the American League:

Appalling, isn't it? This is potentially the team the American League will send onto the field in the Midsummer Classic -- a game that is not only watched by millions all around the world but which also determines home-field advantage for the World Series -- and yet there are three players who are not New York Yankees! Even if CC Sabathia pitches great as usual in June, the only Yankees starting the All-Star Game might be the pitcher, the catcher, one outfielder and the entire infield. Having Mariano Rivera close out the victory wouldn't even make up for such an under-representation of the 27-time world champions.

I blame Yankees fans. They consider themselves the world's greatest fans, but they obviously don't care enough about their own team to make sure that every single starter on the All-Star roster is a Yankee. How do they think these embarrassing vote totals make Nick Swisher (seventh among outfielders) and Brett Gardner (11th among outfielders) feel? How can those two respond to the roll call knowing that those same fans don't care enough to make them starters ahead of a guy with one home run (Hamilton) and a guy who doesn't even play for a team in the United States (Bautista). I'll tell you how it makes them feel. Like they're not True Yankees. Like they play for the Pirates or the Royals.

Yankees fans are getting soft on us. There was a time when you couldn't hardly root for your favorite player without a Yankees fan putting him down and heckling him and making him seem so inadequate you practically wanted to throw rotten vegetables and batteries at him, too. Sure, Cal Ripken Jr. is an 18-time All-Star, a two-time MVP and the all-time iron man with 2,632 games, but he's not a proven winner like Scotty Brosius, a True Yankee who has three times as many World Series championship rings! When was the last time Cal was in the World Series, huh? Huh???? Evidently, the new stadium has priced out such die-hard fans because now they're letting baseball fans in Texas and Canada outvote them at key positions!

Yankees fans need to look to the example of the old Cincinnati fans, who stuffed the ballot box in 1957 the way Joba Chamberlain currently stuffs his pinstripes. They voted eight starters to the National League All-Star team that year, a display of passion so impressive that baseball stepped in like a Middle East strongman and took the vote away from the fans for more than a decade. If Cincinnati (population 297,000, according to the 2010 census) could vote Gus Bell and Wally Post ahead of Willie Mays and Hank Aaron, then New York (population 8,1755,000) should be able to put Jorge Posada (a True Yankee who has twice as many home runs this season as Michael Young -- and five more World Series rings) over the top at DH.

They can't just sit back and take it easy, though. As Rudy Giuliani can attest, if you don't work hard to get out the vote, you can go from presidential front-runner to a possible candidate for "Dancing with the Stars" or "Celebrity Apprentice" before they finish serving coffee at the Iowa caucuses.

So if New York fans want an entire starting All-Star lineup of Yankees, they'll have to earn it. They need to do more than just do the routine stuff, like hacking into Congressman Anthony Weiner's Twitter account to vote 25 times in his name. They need to do this the time-tested, old-fashioned way -- by going to as many games in as many stadiums as possible, grabbing thick stacks of paper ballots away from ushers, stealing them from little kids and then punching out the ballot perforations by hand until they've covered themselves with enough confetti to look like Jeter after a convertible ride through the Canyon of Heroes.

And if they're really serious, the Yankees fans need to take advantage of those write-in spaces, too. There may not be room for Francisco Cervelli, Chris Dickerson and Eduardo Nunez in the American League starting lineup, but that's no reason Yankees fans can't vote them onto the National League team.

You know the rules. You get a fragment from an old box score and the challenge of determining what game it is from and why it is significant. I give this one a difficulty rating of 4.0

But this week's award goes to Chicago reliever Justin Berg, who threw exactly 12 pitches last Wednesday, not a single one of them in the strike zone. His line:

No wonder Cubs fans are so ornery these days. 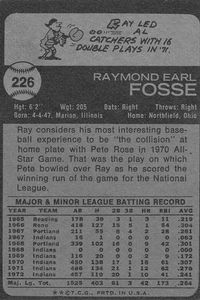 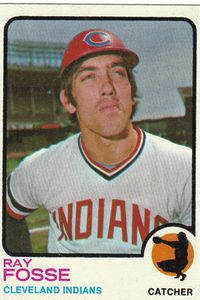 ToppsRay Fosse looks full of confidence on this Topps card.

Boy, Ray Fosse looks smug in this card (1973 Topps, No. 226). While I'm sure this is a photo he doesn't have blown up and hanging in his home, what I like most about the card is the description on the back which reads, "Ray considers his most interesting baseball experience to be 'the collision' at home plate with Pete Rose in 1970 All-Star Game.'' Yeah, "interesting'' is probably just how Fosse would describe that career-altering moment. 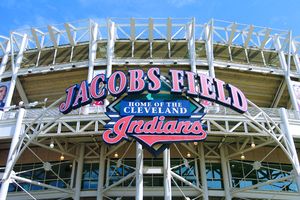 Cleveland (Progressive Field): I may be in the minority, but I've never been overwhelmed by Cleveland's stadium, regardless of what name they're calling it. Oh, I like it enough. The skyline rising behind the outfield is suitably impressive. I like the overall design and the look of the trees in center field. Access is very good for reaching the park. And the Bob Feller statue, as I've noted before, is so lifelike you expect to hear him complaining how overpaid modern players are. But those three levels of luxury suites running from foul pole to foul pole are the most glaring and disturbing in baseball. Seeing them always makes me want to take to the streets, wave a flag over the barricades and raise the tax on the wealthy to 50 percent (and to 95 percent on owners). On the other hand, there is the famous Cleveland stadium mustard, which is so good not even the mustard on Feller's fastball could compare.

• Plate Protection: Do catchers need more protection? Former catcher Buck Martinez doesn't think so even though he broke his leg on a play at the plate in one of the most bizarre plays you could ever see. In a 1985 game between Toronto and Seattle, Martinez took a throw from right fielder Jesse Barfield and held onto the ball even though Seattle's Phil Bradley crashed into him, dislocating Buck's ankle and breaking his leg. Martinez saw Gorman Thomas trying to advance to third on the play, and despite the injury, threw the ball to third. His throw, not surprisingly, missed its mark and went into left field. Thomas then headed home and tried to score. But he didn't reckon on Martinez's perseverance. Martinez says he "just sort of scooted into position,'' took the throw and applied the tag on Thomas. "That was the only time that's ever happened in major league history,'' Martinez said. "A 9-2-7-2 double play.'' And here's the amazing thing -- Martinez also tagged out Jim Presley on a throw to the plate from Barfield at the end of the previous inning. "That what happens when you hit .185 for a season,'' Martinez said. "You have to do something to stay in the lineup.'' Martinez missed the rest of the season, including the playoffs, but doesn't see a need for a rule change. "I got knocked out a couple times in my career but that's the only time I ever got hurt.''

Still, I agree with Buster Olney and others. It may be exciting to see collisions at home plate, but our entertainment is not justification for accepting needless player injury. Catchers should not be allowed to block the plate, and runners should not be able to crash into them. What would people say if runners routinely barreled into the third baseman? Alex Rodriguez was called out for trying to slap the ball out of Bronson Arroyo's hand in the 2004 ALCS, so why should runners be allowed to crash into catchers for the same reason?

• Taps for caps: If baseball wants to honor veterans on Memorial Day, why does it make the players wear such ugly caps? Are there really people who buy these things? Wouldn't a simple, understated U.S. flag on the side of the cap be more suitable?

• Lies, Damn Lies and Statistics: Toronto pitcher Jo-Jo Reyes broke a streak of 13 consecutive losses this week by throwing his first complete game and winning his first game in 29 starts dating back to June 3, 2008. Sabathia, meanwhile, won 59 games in that same span. ... With Kevin Correia's eighth victory of the season Tuesday, the Pirates have now won as many games on the road this year (17) as they did all last season. ... The Mariners are now over .500. Do all the East Coast columnists still want them to trade King Felix?

That "W, 1-0" next to the name Clyde and the large crowd for an early '70s game in Texas should have been clues enough to figure out this was the game David Clyde made his major league debut just 19 days after graduating from high school. Clyde was 18-0 with an 0.18 ERA and 328 strikeouts in 148 innings his senior year. The Rangers selected Clyde with the No. 1 pick in the draft and signed him for $125,000 with the promise he could start two games in the majors before going to the minors. The game was a sellout and topped the last-place Rangers' previous high attendance by more than 12,000 fans, with an estimated 10,000 additional fans turned away. The next night the Rangers drew 3,992. Clyde pitched well in his next start in front of 33,010 more fans and Texas kept him the majors, but his career slid from there. His big league career was over six years later at age 25 with a career record of 18-33. As Sports Illustrated quoted then-Texas manager Whitey Herzog when Clyde made his debut: "I've got nothing to do with it, but if I was the director of player personnel here, as I was with the Mets, I tell you I'd be raising hell about this.''