Inside the life of a sports artist 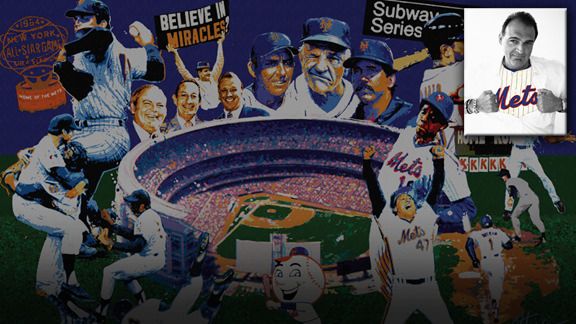 There are so many sports blogs out there -- some good, many bad -- that they start to form a blur. Every now and then, though, one stands out from the pack.

That was our reaction at Page 2 when we came across the deceptively plain-sounding My NY Mets Journal Blog, which has a simple premise: After each Mets game, the guy who runs the site uploads a cartoon-style illustration that summarizes the ballgame. Win or lose, his work is funny and engaging, and you don't have to be a Mets fan to appreciate his talent.

I figured the blog was the brainchild of some scrappy young artist, or maybe an art school class project. So I was surprised to find out that the blogger in question is Joe Petruccio, who's known for doing high-end portraits of classic rock and roll musicians, often for big corporate clients. Why would he be messing around with a Mets illustration blog?

So I contacted Petruccio to get the full scoop. Turns out his career has taken lots of really interesting twists and turns, weaving back and forth between sports and music. He's also a total gentleman who was a pleasure to interview. Here's how our chat went down:

Page 2: You're basically a big shot in the world of fine art. Why would you be bothering with something like your daily Mets illustration blog?

Joe Petruccio: First of all, I don't think of myself as a big shot. I'm just a regular guy who likes to draw and paint.

JP: I've always done sketchbooks. I've actually had the idea to catalog a full Mets season in a sketchbook before, but I've never been able to keep it up for the entire year. So this year I said, "OK, I won't just do the sketchbook -- I'll post the images on a blog."

P2: And that way it sort of forces you to keep doing it, because you develop an audience that expects to see it each day.

P2: How big is the notebook you're using for these entries?

P2: Really? Wow, you cram a lot of detail into that space, man.

JP: I keep it in my back pocket, so it's always with me. That way, if I'm out and about, I can still do the drawing when the game is over. And if I'm not home and don't have access to my scanner, I can still take a photo of it with my BlackBerry and upload it to the blog that way.

P2: And do you use paint, or Magic Makers, or what?

JP: I don't have time to do a pencil outline or anything like that, so I draw everything with black ballpoint pen. Then I color it in with watercolor.

P2: Even at this small size, it seems like it'd be a lot of work to produce one of these every day. How long does one of them take you?

P2: Seriously? That's impressive. And do you actually do one each day, or do you sometimes wait a few days and then do three or four all at once?

JP: No, I do each one right after the game is over.

P2: A lot of games go right down to the wire. Do you ever find yourself cheating by starting the illustration before the game is over, and then there's a three-run homer in the bottom of the ninth, or whatever, that changes the outcome?

JP: No, I never do that -- that's bad luck. I started to do that once, during a game where it looked like they had a comfortable lead, and then the bullpen gave up six runs. So now I'll never do that again.

P2: And do you actually watch every single game? Like, what happens if you miss a game? Or even if you miss the crucial sequence in a particular game?

JP: For every game, I either watch or listen to the radio or watch one of those Gameday things on the computer. Most of the time I have it on the radio.

P2: What if you're out of town, or on vacation?

P2: Of course. Still, that's an intense schedule to keep up. Does it ever feel like a burden?

JP: No. I actually look forward to doing it every day. Even my wife and kids are into it -- they'll be saying, "What are you gonna draw tonight?"

P2: Do you plan to compile all of these into a book or something like that?

JP: I don't really have any plans. I just wanted to create a season-long sketchbook. But I can't tell you how many people have been telling me that it should end up being a book. It's funny, because I conceived of it as just a way for me to blow off creative steam and try out some styles and ideas I don't get to use in my other work.

P2: Your style on these blog pieces reminds me a lot of classic sports cartoonists like Bill Gallo and Willard Mullin.

JP: Thanks. My style is a little more contemporary, but they were definitely an influence on me when I was growing up.

P2: Let's talk about that. Where did you grow up, and how old are you now?

P2: You were born at just the right time, so you came of age just as they were coming into existence. Were you already artistically inclined as a kid? Like, did you do lots of sports doodles and sketches?

JP: Yeah. I wasn't very good at sports. I tried Little League baseball, but I was always afraid of being hit by the ball. So drawing was my thing, my way to connect with sports. I loved Bill Gallo, who was the sports cartoonist for The Daily News. I even did my own sports cartoons every now and then.

P2: Do you still have any of those?

JP: I think I still have the one I did for Dave DeBusschere Night at Madison Square Garden, which I did when I was about 12. And it was a little after that, when I was 13, I got to meet LeRoy Neiman.

P2: Wow, I was about to say that your fine art style reminds me of him. How'd you get to meet him?

JP: I was pretty forward as a kid. I saw him on TV, doing a fundraiser for the local PBS station. The next day, I called the station and disguised my voice to sound like a businessman. I said, "Hi, this is Joe Petruccio. I met Mr. Neiman at the station last night and I'm supposed to have lunch with him today, but I seem to have lost his business card ... " Eventually they said he was listed in the phone book, which hadn't even occurred to me. He was in Manhattan, so I called him up.

P2: And did you explain that you were just a kid?

And He's a Uni Designer to Boot

In addition to doing lots of fantastic artwork and producing a great blog, Joe Petruccio has another distinction: He designed the uniform that the Mets wore in the mid-1980s.

For the full story on how that came about, look here.

JP: Yeah. He was very nice -- he said, "Tell me about yourself." So I explained that I was 13 years old and loved to draw and lived in Brooklyn, and he invited me to come see him, right then and there. I showed him some of my work, and he was very encouraging. I've been friends with him ever since.

JP: I went to the School of Visual Arts and then got a job at Della Femina, a New York ad agency, as a sketch artist. They had the account for Mets advertising at the time, so that was fun. I worked in advertising until I was 40 years old, and it wasn't until then that my art career took off. I still do some advertising work now, as a creative director.

P2: How'd you make the transition from advertising to artwork?

JP: I was a big Elvis fan, and I'd done some Elvis paintings over the years. I posted some of them on a fan website, and some of the other people on that site liked them and e-mailed them to Graceland. The Graceland people liked them and contacted me about becoming an official Graceland artist. They have several officially licensed artists now, but I was the first one.

JP: You'll see my work all over the place. And then that got me started with lots of other rock and roll artwork.

P2: Who are some of your favorite musicians that you've painted?

JP: Les Paul, for sure. Roger Daltry. Dickie Betts from the Allman Brothers Band. I've done so many.

P2: Do these musicians sit for you, or do you work from photographs, or what?

JP: I'll work from photos, or else I'll get some video of them and pause it in a pose that works for me. That's what I do for a lot of my Elvis work.

JP: Yeah, that's kind of a new thing. I've signed on as an official artist for Muhammad Ali and for the "Rocky" movies.

P2: And how did that come about -- did Sly Stallone approach you?

JP: My art publisher was approached by MGM, the movie studio. They were looking for an artist for the 30th anniversary of "Rocky," and they liked my work. And I have to say, Stallone is one of the nicest guys I've ever met. And that was really cool, because I was always a big "Rocky" fan. I must have seen the first movie 30 times in the theater when it came out.

P2: Do you think there's a commonality between music and sports?

JP: In a way, yes, because they're both part of the soundtrack of our lives. You remember where you were when you heard that song, or when you were watching that game.

P2: One last question: What advice would you give to a young artist who's looking to get established?

JP: Paint and draw what you love. But being realistic, if you want to make a living at it, you need to find a niche. My niche was Elvis -- that opened all the doors for me and turned me into this rock and roll artist. But remember, that didn't happen for me until I was 40 years old, so stay true to what you do and stick with it. I have this quote from George Eliot that I love: "It's never too late to be what you might have been." And it's true.

Paul Lukas has no artistic talent whatsoever, so he's sticking with writing. If you liked this column, you'll probably like his Uni Watch Blog, plus you can follow him on Twitter and Facebook. Want to learn about his Uni Watch Membership Program, be added to his mailing list so you'll always know when a new column has been posted, or just ask him a question? Contact him here.