By Michael Weinreb | Special to Page 2 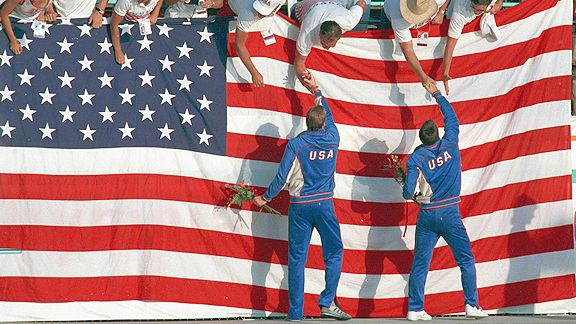 AP Photo/Pete LeaboFlag-waving and chants of "U-S-A!" permeated the 1984 Olympics in Los Angeles.

One fine day in July 1984, an overweight bald eagle named Bomber succumbed to vascular collapse while training to soar over the smog and gridlock of Los Angeles at the opening ceremonies of the Olympics. If this did not mark the zenith of American capitalism in the 20th century, then the moment arrived a few weeks later, when a McDonald's giveaway tied to the U.S. winning gold medals in certain Olympic events caused a number of franchises to run out of Big Mac buns.

That was 25 years ago, and nowadays thoughtful people occupy several weeks of each election year wondering aloud whether the Olympics still matter, questioning our inclination toward jingoism and our sudden collective interest in the backstroke and how all of this relates to America itself. And every time this happens, I think back to the summer of '84, to a time when I was 12 years old, to a time when nothing could have possibly mattered more than the Olympics, because the Olympics were the truest manifestation of the American ideal.

In the summer of '84, excess was hip: Sports Illustrated published an Olympic preview issue that was the thickest single issue of a magazine I've ever removed from a mailbox; it was like "Infinite Jest" with Marlboro advertisements, and I read it cover to cover. In the summer of '84, Ronald Reagan spoke to American athletes and assured them that winning was not enough, that the American ideal was actually about "going as far as you can go." It didn't matter if you were a sprinter or a synchronized swimmer or the Hamburglar or an ailing bird of prey: You gave everything you had for your country. There was, as Rocky Balboa would soon teach us in "Rocky IV," no easy way out, and if an endangered species had to choke on sulfur dioxide in order to teach us this lesson, well, so it was.

All of this was what made the summer of '84 a wonderful moment to be a preteen with little interest in thinking critically and little ability to dispassionately analyze international politics. It was a great time to be an unabashed and unapologetic fan of America. When the Soviets and other Eastern Bloc nations chose to boycott the '84 Olympics, lamenting the "commercialism" of the venture, the dichotomy was rendered that much more clearly: We were better than they were. We had photocopying machines and blue jeans, and the fact that we had boycotted the 1980 Olympics only reinforced, to us, the spiteful nature of Communism.

So the '84 Olympics became a refutation of our ideological foes, an unparalleled spectacle of patriotism and kitsch and corporate synergy and in-your-face capitalism. Because of the International Olympic Committee's pressing financial issues, these were the first games to be staged and organized and financed by the private sector, and they were officially sponsored by Coca-Cola and Xerox and 7-Eleven. At the opening and closing ceremonies, director David Wolper -- shrugging off the distracting fact that the "eagle passed away" -- incorporated trumpets and kettledrums, thousands of balloons, numerous marching bands, a small battalion of baby-grand pianos belting out Gershwin's "Rhapsody in Blue," church bells, skywriters, jazzercise dancers, a flock of doves (though apparently, A Flock of Seagulls was unavailable), a man wearing a jet pack, and enough pomp and glitz, according to the New York Times' Dave Anderson, that it made the Super Bowl halftime show look like a high school play.

At the events themselves, chants of "U-S-A!" were so persistent that at a volleyball game between America and Brazil, fans began chanting "B-R-A!" (Guess who won the match!) Spectators quite literally wrapped themselves in the flag. It became so jarring for the foreigners present that IOC president Juan Antonio Samaranch wrote a letter complaining about ABC's unabashedly patriotic coverage of the games. When Mary Decker ("U-S-A!") tripped over the bare feet of Zola Budd during the women's 3,000-meter final, we did not hesitate: We blamed the foreigner. 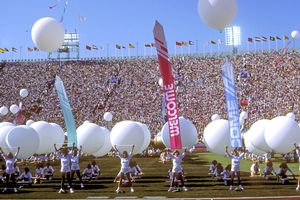 "Oh, what we've done to the Olympics," lamented Frank Deford in Sports Illustrated. "God only knows what the 2.5 billion people around the globe who are watching the games will think of a vain America, so bountiful and strong, with every advantage, including the home court, reveling in the role of Goliath, gracelessly trumpeting its own good fortune while rudely dismissing its guests."

Of course, this was precisely the purpose of the '84 Olympics; it was a one-sided showcase of American superiority. We won 83 gold medals; no other country won more than 20. And no matter one's political viewpoints at that moment, there was something to be said for living in a country where a phone company's $5 million sponsorship of the Olympic torch relay actually prompted a woman somewhere in America (according to Newsweek) to proclaim, "God bless AT&T." It felt good to live in the land of plenty, and we saw no reason to apologize for it. Our Big Macs never tasted better. This was the overarching message of the time -- that the disco-fueled angst and self-doubt of the 1970s had finally ended, and the '84 Olympics were the purest athletic manifestation of that ideal. The '84 Olympics gave us Carl Lewis, the Michael Jackson of track; the '84 Olympics gave us Mary Lou Retton, the Nancy Reagan of gymnastics.

And this is why the Games have never been quite the same as they were then: Because they don't deal well with subtlety and gray areas and moral relativism. Because the Games are at their best when the world seems like a simple place -- even if, in actuality, it never is.

Back then, the majority of American youth knew -- or at least we presumed to know -- what was good and what was bad in the world. Now that we are grown up, our enemies do not field relay squads, except in Peshawar training camps. Now, we watch the Olympics and we concern ourselves with bomb threats and performance-enhancers and how best to ingratiate ourselves to our Chinese overlords. Now we watch the Olympics and we argue amongst ourselves about America's role in the world and about the limits of capitalism. Now our heroes get caught on smart phones while smoking bongs, and nothing is as clear-cut as it used to be, when even a bald eagle went as far as he could possibly go in service to his country.

Rest in peace, Boomer. And may the Lord bless telecommunications companies nationwide.

Michael Weinreb's book "Game of Kings: A Year Among the Oddballs and Geniuses Who Make Up America's Top High School Chess Team" has been released in paperback by Gotham Books. He is working on a book about sports in the 1980s. He can be reached at michaelweinreb.com.

Michael Weinreb (@MichaelWeinreb) is a Grantland staff writer and the author, most recently, of Bigger Than the Game: Bo, Boz, the Punky QB and How the '80s Created the Modern Athlete.