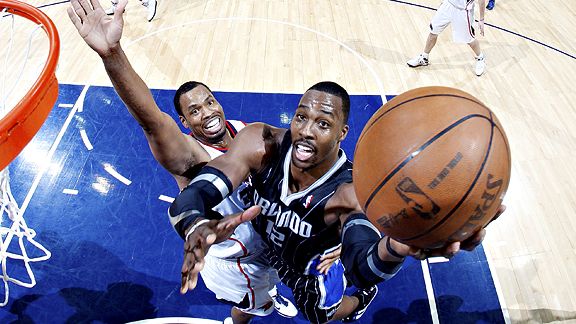 Kevin C. Cox/Getty ImagesDwight Howard is one of the biggest gamers in the NBA.

When Dwight Howard was a kid, he used to watch old basketball training tapes of Magic Johnson, then run outside and practice those techniques so feverishly, it's like he knew when he started ballin' at age 3 that he was working out for his future in the NBA.

But when Howard had the chance to meet the real Magic at age 15, it took only seven words to make Howard take his workouts even more seriously.

Those words? You'll never make it in the NBA.

That right, when Howard met the man who used to inspire him to play basketball as a kid, Magic Johnson actually told the teenage center that he didn't have what it took to take his game to the ultimate level.

"He said I was too skinny," Howard told me while we kicked back at the Ritz Carlton in downtown Los Angeles. Howard was there to introduce the new "adidas miCoach" fitness game, a product where gamers will learn training techniques from pros like Howard and Josh Smith in order to help them increase their vertical leap, strengthen their core and build muscles using Howard's own tried-and-tested pushup routine so Hall of Famers don't look at you and call you "too skinny."

"Magic inspired me by telling me I wasn't going to make it, that I was too little," said Howard. "I was in 10th grade when he told me I was too skinny to play in the NBA. I said, 'OK, we'll see.'"

Thousands upon thousands of pushups later, Howard developed into one of the most unstoppable forces in the game. And it's those words from Magic Johnson that, you can tell, still eat at him and inspire him to train to this day.

Howard shares those training methods in "miCoach" and hopes to inspire kids who are looking to get in better shape and who want a superstar to help motivate them as they play.

Here's what Howard had to tell me about the game after we watched a quick demo, as we talked "miCoach," pushups and what he'd like to see in "NBA 2K12."

Jon Robinson: Why should gamers put down their controllers and stop shooting each other in "Call of Duty" in order to work out with you in "adidas miCoach"?

Dwight Howard: I don't want to say that they have to put those games down just to play this game, but it's important for kids to play "miCoach" for 20 to 30 minutes to help get in shape. A lot of kids are like me -- I'm not going to lie, I sit around with my friends and play "Call of Duty" all the time, but we're just sitting around and being lazy. But if you could put it down for just 20 to 30 minutes a day and train, you can get in shape. We have a problem with that in America. And since we can't get the kids outside anymore, since we can't get adults out to a facility, now we're going into their world, the virtual world, to train them.