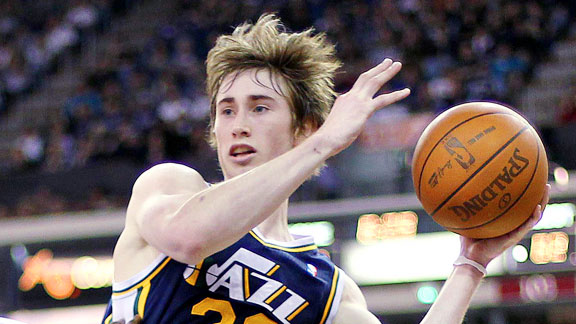 Jon Robinson: I know you've been a gamer since you were a kid. Do you have a favorite all-time game?

Gordon Hayward: The "Halo" series is my favorite. Me and my friends actually played in tournaments and won some money doing that when we were younger. I also play "Call of Duty" and some role playing games. The one thing I've never been into are the sports games. I don't know, I just don't like playing those as much. I bought "NBA 2K11" just to see myself. It was creepily similar and it's cool to say that you're in a video game, but I'm just not into it that much. I'm more into first-person shooters and real-time strategy games.

Jon Robinson: Did your parents ever tell you that playing video games was bad for you?

Gordon Hayward: It's funny you ask that because my mom and dad used to set limits on how much I could play. Growing up, I played every sport I could play, so I didn't have much time, but when I wasn't playing sports, I was definitely playing video games. But my mom used to tell me that I could only play video games for two hours a day and then they would turn off the Internet so I couldn't play online. As a gamer, you know that two hours go by really fast, so it was definitely a bummer. Your parents always ask you why you're playing video games and they think it's a waste of time, but now I'm playing for $100,000. That's a lot of money to bring home.

Gordon Hayward: I think it's a case-by-case basis. It's better for me to stay here, workout, and improve my game. I think depending on who you are, there are better scenarios to play overseas, but for me, I workout twice a day and I'm playing in some lockout leagues like you see with Kevin Durant. I'm definitely still a full-time NBA player and a hoops player, but in my free time, I'm playing video games.

Jon Robinson: The tournament starts October 6th. How much "Starcraft" are you going to play per day to get ready?

Gordon Hayward: Like I said, I workout two times a day, and that takes about five hours, and the rest of the day is just free time. I'll probably just blow it out and play "Starcraft." The most I've ever played in one sitting was about six hours. I think that's a lot of time to just sit down and play one game, but these guys who are professionals do it for a lot longer. You have to train hard if you want to be the best, and that goes for everything, not just basketball. That also goes for video games like "Starcraft."

Jon Robinson: What is it about "Starcraft" that has made the game such a phenomenon worldwide?

Gordon Hayward: I was always a console guy growing up and I'm still a big Xbox guy, that's my thing, but "Starcraft" is just so competitive. Each game, something different happens, and the ranking system they have in "Starcraft" is really cool because you're always playing guys who are about your level, then the more you play, the better you get and you move up into a different class and you're able to test yourself against better competition and see where you rank. If you've never played a PC game before, this one is really mental and is a really cool game.

Jon Robinson: What's your game setup like at home? I figure yours is a little different than most athletes because you're playing console and PC games.

Gordon Hayward: My place is a straight bachelor's pad. I got the big screen TV in my living room area where I got my Xbox and stereo system hooked up, then this summer I built my own computer. That was a big hassle and it took me about two or three weeks to get it all figured out, but it's a really nice new computer with a cool monitor and speaker system, so I got a nice setup.

Jon Robinson: Any predictions for your first tournament?

Gordon Hayward: Let's just hope that I go out there and compete. I'll keep it at that.

Jon Robinson: Do you think being an NBA player, the other gamers are going to try to eliminate you first?

Gordon Hawyard: I think people will just realize that the professional athletes are seeing what these professional gamers are doing and we have a lot of respect for each other.

Jon Robinson: I hear the IGN guys are going to help you train. Did those sessions start yet?

Gordon Hayward: For my sake, I hope they start soon. [laughs] I went to San Francisco and visited all of them and we talked about different strategies, but I'm hoping we're going to start the training soon. These guys I'm playing against have serious skills.