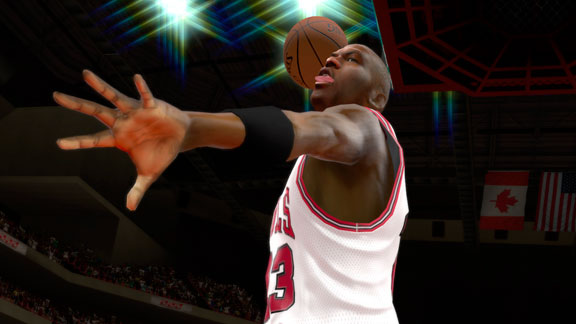 "NBA 2K12" is about the closest fans can get to a virtual time capsule. From Jerry West draining jumpers like only The Logo can, to Wilt Chamberlain posting up Dwight Howard in the paint and throwing one down in Superman's face, it's where legends (complete with afros and short shorts) take on the best ballers of today in games where amazing not only happens but is actually controlled by basketball fans looking to talk a little junk with every Michael Jordan jam.

"It's fun to see myself still relevant in the game, and more than that, it's educational to the kids who never saw me play," Jordan tells me over the phone as we talk "2K12" and his influence over the final product. "With what the 2K guys have done, they're able to utilize my skills in the game against today's players. I think it will be cool for consumers to interact that way.

"That's one of the things that I thought was important and why I wanted to get involved in the game. I wanted to show the relevance between yesterday's players to today."

And for fans, that means we get to see what it would look like for Mike to take flight against the likes of LeBron, then hit rewind and watch it again (and again if you're in Cleveland).

In fact, everything about His Airness is captured with such realism, such authenticity, the only thing missing is the ability to import his character into "MLB 2K11."

Jon Robinson: How much influence did you have over your character's look and skill set in the game?

Michael Jordan: I didn't want them to put me in there if it didn't look like myself, and I didn't want them to put stats that weren't my stats. The guys at 2K are very smart, so they know a lot of things about the game of basketball, and obviously, the things that I've done to the game and the way that I played. I wanted my character to be as close to the way I played as possible, so that it's not something that's false-promoted. I wanted something real.

Jon Robinson: They have everything from your dunks and fadeaway to your swagger on the court. What did you think the first time you saw it in motion? It's a long way from "One on One: Jordan vs. Bird."

Michael Jordan: [laughs] Yeah, it is, it's a long way from the first game I was in, but it just shows you the technology that's evolved over the years. The fact that they can come as close as they have to the way that I played the game, my tendencies, my tongue out, my pants being short, my running technique, my fadeaway ... all the things I've done that they've been able to illustrate in the game just shows how technology has evolved.