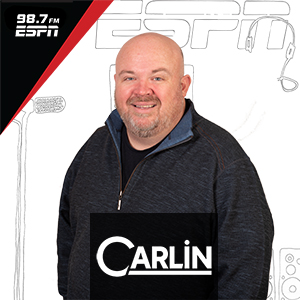 Chris Carlin speaks with Steve Pikiell about Rutgers basketball, the graduation rate of his players and upcoming Michigan game.

Chris Carlin speaks to Andy Martino about the Astros scandal and what the Yanks should do next.

Chris Carlin dives deeper into the Houston Astros cheating scandal by addressing how Rob Manfred and Jose Altuve are handling the punishments and backlash.

What's not to like about the proposed MLB postseason format change? Chris Carlin discusses on 98.7 ESPN.

Steve Spagnuolo joins Chris Carlin on 98.7 ESPN to reflect on the Chiefs winning the Super Bowl.

The bombshell came quick for the Knicks, who should they hire to fill the void? Plus, Mets fans just can't get their hopes up for anything! Chris Carlin discusses on 98.7 ESPN

Steve Spagnuolo joined Chris Carlin on 98.7 ESPN to reflect on the Chiefs winning the Super Bowl.

Chris Carlin talks to callers about how they're processing the news of the passing of Kobe Bryant and his daughter Gigi in a tragic helicopter accident.

Chris Carlin talks to Coach Tom Thibodeau about his relationship with Kobe Bryant and the impact he left on basketball.

Chris Carlin talks to ESPN reporter Adrian Wojnarowski about the life and legacy of the late Kobe Bryant.

Chris Carlin talks about the MLB cheating scandal, Mets' managerial search, Super Bowl LIV and what lessons the Giants can learn from this NFL postseason.

Chris says the MLB sign stealing scandal isn't going away anytime soon, and reacts to the Giants hiring Jason Garrett to be their offensive coordinator.

Tennessee Titans cornerback Logan Ryan joined Chris to discuss the Titans victory over the Ravens and the upcoming matchup against the Chiefs.

If the Mets move on from Carlos Beltran, Chris thinks Terry Collins would be a good fit. Plus, Bobby Valentine shares his thoughts on the cheating scandal.

Chris Carlin discusses the firing of Astro's GM and manager and predicts a similar future for Alex Cora and Carlos Beltran's involvement in the organization's cheating scandal.