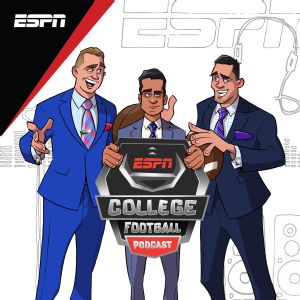 Who Has The Bigger Mouth?

Kevin Negandhi and David Pollack kick off the podcast by discussing David's appearances across ESPN, their thoughts on championship games and Kevin's eight-team playoff idea. Then the guys preview the conference championship games (8:25), hitting on Utah-Oregon, Baylor-Oklahoma, Cincinnati-Memphis, Georgia-LSU, Clemson-Virginia and Ohio State-Wisconsin. Later, they take listener questions (33:43) on the Group of 5, bowl game swag bags and Christmas. Next, Jonathan Vilma joins the podcast (41:22) to talk about scenarios for the No. 4 seed, his thoughts on Clemson, if he could play college football right now and be the same player he was, and the moment he knew his Miami team was going to beat Nebraska in the national championship game.