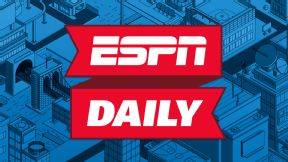 Tua Tagovailoa came into the college football season with Alabama as "most likely to be the next number one overall pick" in the NFL draft. Then came a season-ending hip injury. With reports that his recovery is on track, Tua enters the draft as a game-changing wild card. Ahead of this weekend's NFL combine, ESPN's Todd McShay breaks down Tua's history and weighs where he'll end up in April's draft.

How early on in their lives do players realize that they're better than good? Brian Windhorst and Andrew Han get some unexpected thoughts from the NBA's younger players at All-Star weekend.

Golic & Wingo
The Dan Le Batard Show with Stugotz
First Take, Your Take with Jason Fitz
The Will Cain Show
The Paul Finebaum Show
Packer and Durham
The Sporting Life with Jeremy Schaap