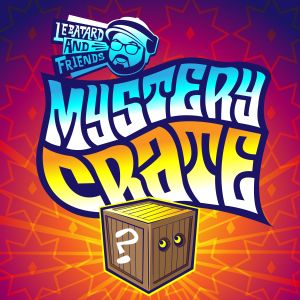 Mystery Crate will serve as a random grab bag of weekly content curated and created by varying members of the "Le Batard & Friends" universe. You'll never know what each individual episode might bring. Hence the name.

Anthony Calatayud and Peter Rosenberg discuss some of the biggest names in hip-hop, what concerts will look like post-pandemic, his journey from Maryland to Hot97 and much more.

Sarah Spain is a sports media star and host of the popular LeBatardAF podcast "That's What She Said!"... But what is she like at home? Who is she married to? What does her spouse think of the mean tweets she occasionally gets? Find out the answers to these questions and more as Sarah and her husband Brad answer questions asked by our Reddit community on this episode!

Jordan Wiseley, 3-time Challenge champ, joins ESPN's #1 Challenge Podcast this week to talk about his elimination vs. The Loch Fess Monster, explain his Challenge training regimen, break down some video and play a game of "What's the Deal with Nelson?"

A tragic update on Tim Jerns. The disgraced former Southeast Tulsa College Strength and Conditioning Coach had blamed Dan for creating a national controversy by calling his questionable training program into question. In the weeks since, Tim Jerns had been sleeping at Red Lobsters and formed a menacing football team that was driving through all parts of the country in hopes of playing pickup games.

Almost everyone has weighed in on ESPNs The Last Dance. However, there is a specific demographic that has been largely ignored and unfairly dragged through the mud throughout the entire series... Charlie Kravitz and GQs Clay Skipper speak up for the millennials.

Challenge legend, Laurel Stucky, joins ESPN's #1 Challenge Podcast! Elizabeth, Billy, Charlie Kravitz and Charlie Hulme get Laurel's thoughts on last week's episode and find out what it's really like to be on The Challenge. The crew also tries to convince Laurel to book some of her friends on the show.

Poop Sandwich! Bleacher Report's Jonathan Snowden wrote a spectacular book about Ken Shamrock titled "Shamrock: The World's Most Dangerous Man". This interview with Jonathan covers Ken Shamrock's professional wrestling career. It has to be heard to be believed. From sleeping with his on-camera sister to an incident with Triple H and a poop sandwich, you're going to be blown away by how crazy Ken Shamrock's life and wrestling career got.

David Gilmore is a lobbyist for NexGen Meats. He says he's speaking for the little man that's being forgotten as the government issues bailouts to hard-hit industries. Listen and decide for yourself.

The Challenge pod is back. Billy, Elizabeth, Kravitz and Hulme discuss the Zach and Jenna drama, the fallout from the Kailah and Bear hook up, a classic Josh blunder and being big timed by another Challenger.

On this episode of Mystery Crate, its the return of Roylationships as Roy and his wife, Enide, discuss life under quarantine.

Tim Jerns still burns. After losing everything following his controversial first interview with Dan Le Batard, Tim Jerns is attempting to pick himself up by his bootstraps and make something of himself again.

Billy Gil, Charlie Kravitz and Charlie Hulme were very excited to surprise E-Liz with a mystery guest from The Challenge. Unfortunately the mystery guest cancelled. The crew also discussed Cory almost blowing himself up, the Kailah and Bear love story and whether or not Rogan killed Jay.

Tampa slugger and friend of the show Andy Gango is a beloved fan favorite and one of the most colorful personalities in all of sports. Recently, his bizarre behavior on social media has left many confused. We reached out to Andy to see if he wanted to share what he was going through.

Dr. Garva Yules, a respected algorithmic professor, runs a simulation on one of the most powerful supercomputers on the planet to tell us how the NBA season would have gone. Plus, Tim and Jeff Kurkjian discuss their love of baseball with Greg and Chris Cote.

Billy Gil, Charlie Kravitz, Charlie Hulme and E-Liz to discuss cooking, The Challenge, doughnuts, Super Bowl 53 and more. The crew also tries to figure out a pitch to get Johnny Bananas to join the show, and they break down Fessy's college game tape.

The Return of Jerns! Tim Jerns joined the "Mystery Crate" two weeks ago to discuss his unconventional training methods at Southeast Tulsa College. Tim Jerns now alleges that Dan Le Batard ruined his life with that interview by taking him out of context. After some discussion, Jerns decided to return to the podcast and discuss the fallout from his controversial interview.

Tim Jerns sits down with Dan Le Batard to discuss his controversial strength and conditioning program at Southeast Tulsa College that has made national news with their seemingly involuntary workouts that press on despite 3/4 of the country being under stay-at-home orders.

The Shipping Container discusses what theyre doing while being stuck at home, how much art they have on their walls, parenting in the age of electronics and more.

The Shipping Container gives you an update on how theyre holding up in the age of social distancing.

Holly Gibney, Ralph and El Cuco join the gang to review the season finale of the Outsider.

The Shipping Container discusses what game show they would want to be a part of and the jobs they would have if they werent in radio. Plus, the penultimate installment of Bachelor With The Boys.

The Shipping Container sets out to fix the NBA dunk contest with the CEO of Team Flight Brothers and NBA dunk coach Chuck Millan.

Miami Nightlife Legend Purple sits down with Billy and Allyson. Plus, Mike Golic Jr. drops by for another installment of Bachelor with the Boys

Allyson Turner gets annoyed with Billy Gil at the Super Bowl. Plus, Dan, Chris and Roy tour the Khan family mega yacht.

When the whole world crashes around "The Dan Le Batard Show with Stugotz" thanks to a disastrous Super Bowl week, listeners can point to this episode as the beginning of the end. This episode is essentially a 40-minute cry for help. Please enjoy our Super Bowl preview!

Mike corners AEW President Tony Khan and fires off as many wrestling questions he can. Plus, Billy tells us about "The Challenge" and Chris Cote debuts his new alter-ego, "Chip Flair".

Billy Gil and Allyson Turner are joined by a litany of special guests in Allysons Holiday Spectacular!

On this car-centric episode of the Mystery Crate, the Shipping Container discuss some pet peeves when it comes to driving on South Beach. Plus, Greg and Chris Cote head to the racetrack on a high speed 'Ya Never Know'.

The Shipping Container and Greg Cote talk some ship with Anthonys bachelor party cruise a week away. Plus, the triumphant return of Naked Chris.

Mike Golic Jr. makes his Mystery Crate debut to show the shipping container how to step up their kick game.

Toni Collins makes her return to the Mystery Crate. Plus, Ya Never Know is back by popular demand!

Nick Kostos has been described as a "high-energy gambling personality"... Naturally, Billy is worried about him. Nick brings his disdain for Pat Shurmur and his passion for Yeezy's over to the Mystery Crate and delivers a scorching hot Michael Jordan take.

This was supposed to be a heartfelt South Beach Session about a 30-year-friendship and the importance of having a mentor. However, Greg Cote was incapable of introspection so it devolved into something else.

SportCenters Toni Collins makes her Mystery Crate debut. Plus, Greg Cote flashes how hip he is to contemporary music.

Dion Waiters chats with Allyson, Billy and Chris. Plus, The Cotes debate with the rest of the crew over what makes Italian Food so great.

The Miami Heat's Tyler Herro talks drip with Chris and Billy. Plus, The Ringer's Kevin Clark joins The Shipping Container for some hard-hitting football conversation that predictably devolves into something other than that.

Heat Players Kelly Olynyk and Derrick Jones Jr. speak to Billy and Chris at Miami Heat Media Day. Plus, an all-new edition of Ya Never Know in which the gang tries to get to the bottom of some of Greg Cotes idiosyncrasies.

Tanking is becoming more of an issue in American sports. This week, _____ ______ & _____ __________ join Mike to have a roundtable discussion on some potential creative and practical tanking solutions for each major sport.

It's a ___ centric episode of Mystery Crate! He's known as the Shipping Container's "Man of Mystery" and this week, along with his ____, _____, provide a rare glimpse into his private life.

Not a lot of mystery to this one. Its the LAF live show from the Gramercy Theatre in NYC.