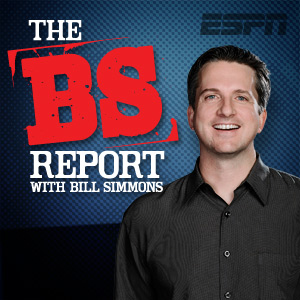 Bill Simmons, Wesley Morris, and Chris Connelly ask "What's at stake?" and "Are we sure they're good?" about various movie stars in their Summer Movie Preview.

Chuck Klosterman calls in to give his thoughts on the NFL draft, whether there should be a change to the NBA's intentional foul rule, and the final season of 'Mad Men.'

Jimmy Kimmel and Cousin Sal join Bill to discuss Mayweather-Pacquiao and what it was like to walk in with Manny. Plus, Bryan Curtis gives his perspective on the big fight.

Haralabos Voulgaris stops by to discuss the Clippers' Game 5 loss to the Spurs and whether officiating had anything to do with it. Plus, is Jason Kidd a good coach?

Brian Windhorst joins Bill to discuss the Kevin Love injury, predict who will win the Eastern Conference, and ask if Paul Pierce is back.

Grantland NFL columnist Bill Barnwell calls in to talk about the upcoming draft before Bill Simmons declares his newfound hatred for a close Patriots rival.

Bill Simmons, Jalen Rose, and Zach Lowe countdown the 25 most intriguing people of the NBA playoffs.

Jalen Rose, Zach Lowe, and Bill Simmons ask which teams have a sense of urgency and whether there's a solution to the Hack-a-Shaq problem. Then: playoff predictions.

Bill's dad calls in to talk about the Celtics making the playoffs, the Aaron Hernandez trial, and the Red Sox starting the season strong.

Greg Wyshynski of Yahoo Sports joins Bill to discuss the NHL playoffs and what went wrong for the L.A. Kings. Then Alan Sepinwall of HitFix talks Sunday-night TV.

NBA gambler Haralabos Voulgaris joins the 'B.S. Report' to break down what an MVP candidate should be and why the Memphis Grizzlies fell apart. Then they predict the conference finals.

Legendary film and TV producer Brian Grazer sits down with Bill Simmons to discuss the early days of his career, his partnership with Ron Howard, and his new book, 'A Curious Mind.'

Bill Simmons talks about his journey to joining ESPN.com. Then, Grantland's Wesley Morris stops by the 'B.S. Report' to discuss 'Furious 7.'

ESPN's Brian Windhorst calls in to talk about how Kevin Love fits on the Cavaliers, LeBron and David Blatt's relationship, and Cleveland's odds going into the playoffs.

Bill visits Abby Wambach and Alex Morgan as they train for the World Cup to discuss the evolution of women's soccer, how playing many sports at a young age helped them excel in soccer, and what you can do to help them bring the World Cup home.

Serge Ibaka sits down with Bill Simmons to discuss the documentary about his life, 'Son of the Congo'; his difficult path to the NBA; and what Russell Westbrook is really like.

Legendary wrestler Hulk Hogan stops by the studio to talk about the evolution of the sport, the time he spent in Japan, and tearing his biceps lifting Andre the Giant.

Wesley Morris and Bill Simmons do a deep dive on the work of Margot Robbie and a deeper dive into the fashion of sports media personalities.

Horatio Sanz tells Bill Simmons what it was like working on 'SNL,' his dark period after leaving the show, and the launch of his new podcast.

Baron Davis sits down with Bill Simmons to discuss his potential comeback to the court, his documentary filmmaking, and the horror of playing for Donald Sterling.

Rembert Browne tells Bill Simmons about his experience as part of a group of journalists selected to fly on Air Force One with President Obama to Selma, Alabama, for the president's speech marking the 50th anniversary of the historic civil rights marches across the Edmund Pettus Bridge.

ESPN's Ryen Russillo sits down with Bill Simmons to talk about the Boston Celtics' playoff run, the drama in Cleveland, and who will be in the NBA Finals.

Jimmy Kimmel gives details about having President Obama on his show, Stephen A. Smith talks about the upcoming Mayweather-Pacquiao fight, and Rachel Nichols discusses her impressive career trajectory.

Zach Lowe joins Bill Simmons to discuss the NBA MVP race, Kevin Durant's place on the Thunder, and who's the best team in the East.

Doug Collins stops by the studio to share stories of playing for the 76ers and coaching a young Jordan on the Bulls, and then breaks down how the NBA playoffs are shaping up.