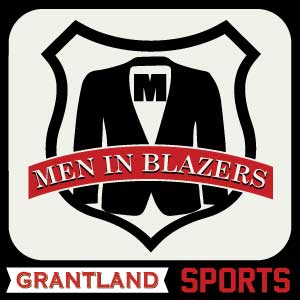 Roger Bennett and Michael Davies discuss football. And wear blazers. Usually at the same time. The Men in Blazers are driven by the belief that soccer is America's sport of the future. As it has been since 1972.

Rog and Davo welcome back the Premier League with 10 questions, and talk with their World Cup hero Mexico manager Miguel Herrera.

Rog and Davo, back from Rio, reflect upon Germany's triumph, elect their Men of the Tournament, and reminisce on their personal highlights from Brazil 2014.

Rog and Davo celebrate/mourn the U.S. after its World Cup ouster and break down the quarterfinals live from Rio.

Rog and Davo discuss a U.S. draw that feels like a loss, fix everything that is wrong with English soccer, and talk Miguel Herrera and CONCACAF thunder.

Rog and Davo mourn England's insipid campaign, discuss the end of Spain's reign, marvel at the Von Trapps' win, and ask if soccer has gotten too big in the U.S.

Rog and Davo report in from the Crap Part of Rio to mourn England, celebrate the United States, and wonder about small bananas.

The gents struggle to undrop their jaws after a weekend of action in which Liverpool scored three goals too early. The spectacular Sir Patrick Stewart guests.

Rog and Davo mourn the passing of David Moyes, "Dare to Jozy," and welcome their hero, Landon Donovan.

Rog and Davo revel in the emotional magic of Liverpool-Manchester City. Haim jump on board for the MiB Passover special.

Rog and Davo marvel at Manchester United's capitulation to Liverpool, salivate over Julian Green, and welcome Tim Cahill to the pod.

Roger Bennett interviews Jurgen Klinsmann live onstage at SXSW Sports. An Englishman and a German bond over their shared passion for American Soccer.

Rog reports from Cyprus to talk about Manchester City's League Cup triumph with Davo, who welcomes Rebecca Lowe back from Sochi.

Rog and Davo relive the joy and agony of the John Terry ghost goal that sunk Tim Howard and Everton. The mighty Billy Beane guests.

In a live special, Mr. Barry Hearn reveals his "10 Lessons of Life" before a sold-out audience of GFOPs in New York City.

Rog and Davo are tongue-tied and cross-eyed by the EPL's narrative flip-flops as Liverpool thrash Arsenal. Marc Gasol guests to preview Barcelona-City.