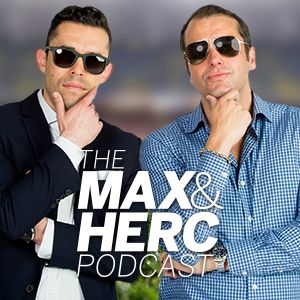 Max Bretos and Herculez Gomez provide their unique perspectives on American soccer, including MLS, the USMNT and much more.

The guys chat with and sing to Portland Timbers star Diego Valeri at MLS Media Day, and Kendall Waston stops by to talk about his plans for FC Cincinnati, Costa Rica and more.

Jozy Altidore and Ola Kamara join the guys on set at MLS Media Day in LA. Plus, Max and Herc reflect on the legacy of the late coaching legend Sigi Schmid.

The guys discuss the future of the MLS SuperDraft and the big moves for Christian Pulisic and Diego Lainez. Plus, Sebi Salazar chats with Frank de Boer and Caleb Porter.

The guys discuss Gregg Berhalter's appointment as USMNT coach, the Liga MX playoffs and early retirements in MLS. Plus, a chat with Atlanta keeper Brad Guzan ahead of MLS Cup.

The guys break down the first legs of the MLS conference finals and make their Liga MX playoffs picks. Sebastian Salazar joins the show to discuss his bilingual MLS coverage.

The guys discuss the MLS conference semis and the USMNT coaching search. Plus, Merritt Paulson on the Timbers' playoff run, why he might quit Twitter, Guns N'Roses and more.

The guys break down the goings-on in the MLS Cup Playoffs, respond to the actions of spectators at LAFC's loss to RSL and examine Cruz Azul's pursuit of a domestic double.

The guys hand out their 2018 MLS awards and make their playoff picks. Sporting KC coach Peter Vermes calls in to discuss the playoffs, territorial scouting and the USMNT.

The guys discuss the big news out of Columbus and what it means for both Crew SC and a team in Austin. Plus, a look at USMNT-Peru and the latest on a potential rift in Mexico.

Sebastian Salazar joins the guys to react to San Jose's shock hiring of new coach Matias Almeyda. Plus, a look at the USMNT squad and Toronto FC missing the MLS Cup playoffs.

The guys break down New York Red Bulls' big win over Atlanta United and the Super Clasico draw between America and Chivas. Plus, which MLS players are fighting for their jobs?

The guys look back on the Campeones Cup and discuss Tata Martino's future in Atlanta. Plus, New York Red Bulls stars Luis Robles and Sean Davis join the show in the studio.

Michael Bradley joins the show to discuss clashing with Zlatan, being labeled a USMNT villain, the Campeones Cup and more. Plus, reaction to USA-Mexico and Maradona's new gig.

The guys get together in Nashville ahead of USA-Mexico to discuss the rivalry, from its best moments to the state of both teams as the 2022 World Cup cycle begins.

The guys discuss Clint Dempsey's legacy and debate the top five USMNT players ever. Plus, the Tuca Ferretti-Miguel Herrera feud and a chat with D.C. United's Bill Hamid.

Sacha Kljestan joins the show ahead of Orlando's Rivalry Week showdown with Atlanta. Plus, the guys discuss MLS's worst fans, coaching in the U.S. and trouble at Veracruz.

The guys react to an unbelievable finish in D.C. starring Wayne Rooney, debate who should be the MLS MVP in 2018 and reveal the next big thing in Mexican soccer.

Sami Khedira joins Max and Herc to talk Juventus ahead of the MLS All-Star Game. Plus, the guys react to Zlatan Ibrahimovic's absence from the All-Star Game.

Max and Herc head to Atlanta for the MLS All-Star Game and chat with Bradley Wright-Phillips, Aaron Long and Alphonso Davies. Plus, Sebi Salazar joins to talk MLS vs. Liga MX.

Max and Herc discuss Juan Carlos Osorio's future and if he would be a good fit to coach the U.S., Josef Martinez's hat-trick record and Alphonso Davies' move to Bayern Munich.

Sebi Salazar delves into the opening of Audi Field and D.C. United's issues. Plus, the guys talk World Cup, and Herc explains why the Earthquakes are the new Cleveland Browns.

Herc describes what it's been like to be at the World Cup. Kasey Keller and Kate Markgraf join Max to talk the USMNT's absence, CONCACAF's performance and rooting for Mexico.

Max & Herc react to Earnie Stewart being named USMNT general manager and give their predictions for the 2018 FIFA World Cup.

With the World Cup approaching, the guys break down Mexico's squad for Russia and the latest comments on the USMNT. Plus, they react to the latest update on Patrick Vieira.

The guys debate where Chicharito ends up after West Ham. Plus, they break down the Red Bulls' rout of NYCFC, Zlatan's MLS review, the Liga MX playoffs and Seattle's struggles.

The guys talk David Villa, VAR and Donald Trump's comments about the 2026 World Cup bid. Plus, they preview the Liga MX playoffs and break down Mexico's messy pro/rel issue.

Max and Herc get together for an impromptu podcast to discuss Chivas defeating Toronto FC on penalties to win the CONCACAF Champions League final.

The guys preview the second leg of the CONCACAF Champions League final, break down the week in MLS and address the possibility of Liga MX players going on strike.

Max and Herc get together for an emergency podcast to break down the first leg of the CONCACAF Champions League final, where Chivas leave Toronto with the advantage.

The guys discuss the merits of VAR, LAFC's struggles and Zlatan Ibrahimovic. Plus, they preview the CCL semifinal second legs, and Max chats with Juan Carlos Osorio.

The guys discuss Zlatan Ibrahimovic's memorable MLS debut and the inaugural El Trafico. Plus, they preview the CCL semis and evaluate the USMNT and Mexico's recent friendlies.

The guys discuss the early struggles of Toronto, Seattle and Orlando City, react to the latest drama in Liga MX, break down the USMNT squad to face Paraguay and more.

The guys talk #SaveTheCrew, LAFC and more from Week 2 of MLS. Plus, they discuss whether the MLS clubs can hold on in the CCL and the possible return of Liga MX's 20/11 rule.

The guys examine the first weekend of the MLS season, preview the CONCACAF Champions League quarterfinals and discuss Mexico's plan to freeze promotion/relegation.

The guys discuss Landon Donovan's controversial comments, the 2018 MLS season and the league's performance in the CCL. Plus, Max talks about his new role as the voice of LAFC.

Herculez Gomez chats with New York Red Bulls and USMNT midfielder Tyler Adams about the 18 year old's mindset as a pro, the time he told Herc off on the field and much more.

Max and Herc are joined by Sebastian Salazar to break down Carlos Cordeiro's election as U.S. Soccer president, the power of the Athlete Council, what comes next and more.

Bob Bradley joins the guys for an in-depth discussion about the state of the U.S. national team, and Herc Gomez provides shocking new details in the Jonathan Gonzalez drama.

Max and Herc are in California for MLS Media Day, where they chat with Sacha Kljestan, fresh off his move to Orlando City, and 2017 Golden Boot winner Nemanja Nikolic.

Herculez Gomez shares what Jonathan Gonzalez told him about his decision to choose Mexico over the United States, and the guys break down how the U.S. lost the Monterrey star.

U.S. Soccer presidential candidate Kyle Martino sits down with Max Bretos to discuss his platform and answer your questions about the future of the American game.

Max and Herc are in Canada for the MLS Cup Final rematch between Toronto FC and Seattle Sounders. Greg Vanney and Brian Schmetzer both join the guys to preview the 2017 final.

Max and Herc break down the next round of fixtures in the MLS and Liga MX playoffs, and Derek Rae goes in-depth on American stars in the Bundesliga.

The guys make their picks for the MLS conference finals and the Liga MX playoffs, and they draft their ultimate Thanksgiving dinner.

Jon Champion and Dax McCarty join the pod to talk MLS playoffs and the Altidore-Kljestan clash. The guys react to Kyle Martino's decision to run for U.S. Soccer president.

Eric Wynalda calls in for a discussion about his U.S. Soccer presidential candidacy. The guys discuss the sluggish start to the MLS Cup Playoffs and the fall of Cruz Azul.

The guys discuss the MLS Cup Playoffs, the effort to save Columbus Crew SC, Chivas' woes in Liga MX and the U.S. Soccer presidential election.

Sebastian Salazar joins the guys for a heated discussion about the U.S.'s World Cup failure, who's to blame and how to recover.

Max and Herc are joined by special guest Shaka Hislop to vent, evaluate and make sense of the United States' failure to qualify for the World Cup.

The guys chat with Brad Guzan about the rise of Atlanta United, their record crowd and the 7-0 rout. Gab Marcotti elaborates on reports of a failed Prem move for Andre Blake.

The guys celebrate Herc becoming a father, evaluate the best teams in MLS and dissect critical comments about the USMNT.

Max may be in the California sunshine, but the guys still have a lot to say about the U.S.'s recent World Cup qualifiers and the reaction from fans and pundits alike.

Max & Herc break preview the international break, assess David Villa's Spain call up and give their final thoughts on Mayweather vs. McGregor.

The guys talk about Toronto FC's stellar season and challenges of a short window between Mexican seasons. LAFC president Tom Penn calls in to talk about building his squad.

Sebi Salazar joins the guys to talk Rafa Marquez and the lack of Mexican stars in MLS. Bradley Wright-Phillips calls in to discuss his big season, Kaka's red card and more.

The guys talk MLS All-Stars, the league's best players and the wild story of Liga MX surprise Lobos BUAP. Soccer fan and "Around the Horn" panelist Frank Isola calls in.

Max and Herc relive their experience at El Clasico, and Herc catches up with MLS All-Stars Jozy Altidore and Dom Dwyer.

From opposite ends of the U.S., Max and Herc react to the Gold Cup so far, discuss Osorio's future and preview the final.

The guys discuss the start of the Gold Cup and the absurdity of MLS All-Star voting. Former international Frankie Hejduk calls in for a lively chat.

Max and Herc preview the Gold Cup, sit down with Brad Guzan and get an inside look at Herc from a special guest.

The guys celebrate finally having their own iTunes channel by discussing the U.S. Open Cup, Max's career, Dominic Kinnear's firing and Dom Dwyer's call-up to the USMNT.

Herc offers a unique plan to get Cristiano Ronaldo to MLS. ESPN's Eric Gomez calls in to talk about pressure on Mexico. The guys weigh in on how VAR will affect MLS.

Max and Herc discuss the allure of the Estadio Azteca, the U.S. U-20's exit at the World Cup and Mike Petke's harsh words for his Real Salt Lake players.

Max, Herc and Sebi discuss whether or not Javier Hernandez is among the best Mexican players ever, the best MLS rivalries and the controversial Liga MX final.

Max and Herc chat with Timbers owner Merritt Paulson, discuss the impact of releasing MLS salaries for public viewing and catch up on Liga MX.

Max and Herc sit down for an exclusive interview with Mexico national team coach Juan Carlos Osorio, who opens up about his start in coaching, his philosophy and more.

The guys chat with USMNT star Jermaine Jones, who has a message for his doubters. Plus, ICC mastermind Charlie Stillitano stops by.

Max and Herc preview crucial qualifiers for the U.S., break down the latest MLS action and chat with Benny Feilhaber.

Philadelphia Union star Alejandro Bedoya joins the podcast. Plus, Max and Herc make their picks for the 2017 MLS season.

In the inaugural Max and Herc podcast, Bruce Arena and Julie Foudy join the show and the guys discuss the 2017 MLS season.