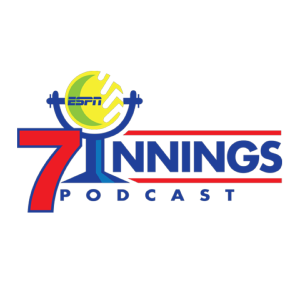 7Innings is a weekly Softball Podcast chronicling the Road to the Women's College World Series and beyond. The ESPN personalities covering the sport will shine a spotlight on the teams and players that make softball so special. No one has more fun talking about softball than us!

We wrap up the 2020 season by looking forward to 2021. Plus interviews with Jamie Trachsel, Morganne Flores, & Janae Jefferson and Shaggin Stats makes its triumphant return!

Tori Tyson, Aaliyah Jordan & Natasha Watley join us for an honest conversation about race and diversity in the sport of softball & how our community can become better allies.

Part 8 of our nine part Greatest Ever series. The crew breaks down who they think is the Greatest Left-Handed Pitcher Ever. Vote now on ESPN.com!

Part 7 of our nine part Greatest Ever series. The crew breaks down who they think is the Greatest Utility Ever. Vote now on ESPN.com!

Part 6 of our nine part Greatest Ever series. The crew makes their three picks for Greatest Outfielder Ever. Vote now on ESPN.com!

Part 5 of our nine part Greatest Ever series. The crew breaks down who they think is the Greatest Third Baseman Ever. Vote now on ESPN.com!

Part 4 of our nine part Greatest Ever series. The crew breaks down who they think is the Greatest Shortstop Ever. Vote now on ESPN.com!

Part 3 of our nine part Greatest Ever series. The crew breaks down who they think is the Greatest Second Baseman Ever. Vote now on ESPN.com!

Part 2 of our nine part Greatest Ever series. The crew breaks down who they think is the Greatest First Baseman Ever. Vote now on ESPN.com!

Part 1 of our nine part Greatest Ever series. The crew breaks down who they think is the Greatest Catcher Ever. Vote now on ESPN.com!

Patty Gasso stops by and we do a wide-ranging interview. Plus some of our favorite WCWS memories and a tease for an exciting upcoming softball stunt on ESPN.

We talk to Rachel Garcia, Bubba Nickles, and Dejah Mulipola about being able to play with their college teams next season before competing in the Olympics in 2021.

The crew interviews Alabama's Patrick Murphy and Minnesota's Piper Ritter - plus some NCAA updates, a declartion of our pro-mask stance, and plenty of Star Wars.

We bring on Lisa Fernandez and Stacey Nuveman for a wide ranging conversation. We also talk news and notes before doing the #428wallsitchallenge

The 7Innings crew goes through our Pitchers Who Rake bracket to determine the greatest collegiate hitting pitcher (or is it pitching hitter?) of all time.

We finish out the bracket and determine who the greatest collegiate slugger of all time is. Disagree? Let us know @7InningsPodcast.

After revealing the Greatest College Slugger Bracket and getting some fan input on social media, we reveal (and argue!) the results of the first round matchups. We meant to g

We talk recent developments with the NCAA and the Olympics, remember the 2010 WCWS and give you another drill you can do at home. Plus we hear from Megan Langenfeld and Sydne

The crew discusses the 2020 Olympics, our bracket for the Best College Slugger of All Time, and hears from Jessie Harper and the Shipman Sisters.

We are joined by Olympians affected by the postponement of the 2020 Tokyo Olympics to talk through the emotion of the decision and how they move forward.

We kept our social distance, but we couldnt help but spread our love for softball. Our thoughts on the 2020 season and where we go from here.

The squad is back to tell you who's hot, who needs a winning weekend, and who's going to win their conference. We also pepper you with coaching tips because we're too nice.

Lots of love to spread this week. Does Jessie Harper have the best swing in the country? Should Texas be ahead of UCLA? How many new words will Michele and Amanda invent?

What a week! The crew breaks down all the early mayhem. A couple of pitchers with no-nos joined the pod. And nobody shags stats better than we do!

Third week of the season, third different No. 1 team in the nation. The crew breaks down the chaos and tells you why the Bruins might have staying power.

The 7Innings crew welcomes Opening Day, giving you the goods on the upcoming softball season, and breaking down everything from title contenders to the 2020 summer Olympics.

Its the first day of the WCWS Championship Series. Beth, Jess, Michele, Amanda, Holly and Kayla preview the UCLA vs Oklahoma matchup and what we expect to see tonight.

7Innings hits a new high for in-person contributors with 12. Breaking down every team in the 2019 Women's College World Series. #ShagginStats

After an exciting and emotional regional weekend, the 7Innings crew break down all the games for the upcoming Super Regionals. Plus we answer some questions from twitter fans.

Live, sort of, from Texas A&M as we podcasts from the patio. Talking Big 12, Pac-12, Big Ten, and what we heard from the teams before the start of the SEC Softball Tournament.

A big group of the 7Innings crew get together to discuss the upcoming weekend of softball and the ESPN Women's College World Series meetings from Charlotte.

Jessica Mendoza is back with us to talk about adding a paid 3rd assistant coach in baseball and softball. We give a big group hug to some small schools. And where's Jenny?

Courtney Lyle makes her 7Innings Podcast debut as the crew spends an hour with the Florida State coaches. Plus we talk Oklahoma, UCLA, and the ACC Network.

This week on 7Innings, the anatomy of an upset, smash sisters, sleepers and streakers, and a big series at the Rhoads House.

Florida Coach Tim Walton joins the Podcast to talk about analytics, transfers, and parity in the game. Is instant replay coming to a softball field near you?

Beth gives a shout out to the Michigan coaching staff. We make early picks for the WCWS. Everyone agrees on player of the year. And a shaggin' stat you won't believe.

Beth and the gang discuss why speed never slumps, where have all the slappers gone, and how good UCLA might really be.

Jenny Dalton-Hill joins a cast of thousands to discuss freshman pitchers, bat flips, and Arizona. The whole crew reminisces about their favorite sounds from the game.

The gang talks about the newest New York Met. Beth takes some questions from twitter. And we pick some wildcard teams to make a deep post season run.

This week we talk about the offensive power surge in college softball. And Michele deals with a different kind of power issue. And as always Shaggin' Stats!

Beth, Holly, Michele, and Kayla look back at the St. Pete's Clearwater Elite Invitational and look forward to the Mary Nutter Collegiate Classic.

Season 2 begins with a new addition to our team, Kayla Braud. We talk the hot topic of transfers and the teams and players you should be watching as the season starts.

We hit everything from Beth's famous introduction to our amazing guests to shaggin' stats to the Women's College World Series and so much more. We hope you have as much fun listening as we did putting it together. Enjoy!