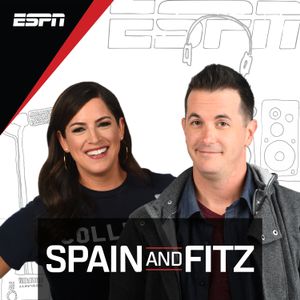 Weeknights on ESPN Radio, Sarah Spain and Jason Fitz take you through the nights action and dive into the big sports topics, with guests that are in the know& Spain & Fitz, airing live 7-9PM eastern. Those conversations and some unique podcast content can be found here in each nights episode of the Spain & Fitz podcast.

Sarah & Jason talk NFL teams hit hardest by injuries in Week 2, try to get a handle on the MLB & NBA amid the current sportspocalypse and play Good Take or Hot Take on a variety of analysts Monday overreactions. Plus, we get Fitzs thoughts on the Raiders making their debut in his hometown of Las Vegas and hand out some honors for the best and most embarrassing performances of NFLs Week 2. Oh...and Sarah admits the rooftop open bar got the best of her in her own Walk of Shame on the pre-party.

Jason & Sarah discuss the return of Big Ten football & talk to two players about the decision. Plus, who should get most of the blame for the Clippers collapse & why arent the Nuggets getting more love? Nick Friedell joins #HiFraand & talks Conference Final match-ups, plus Jason & Sarah argue about whether bands should play songs differently live or stick to the album version. And: The Demon Spawn of Jeff Passan.

A WILD Week One in the NFL--We do the Monday Walk Of Shame & honor the weekends studs, plus we overreact with Good Take or Hot Take. The author of a new Patriots book spills on Bill & Brady and the Pre-Party is as weird as ever, talking zombie-filled yards, upside-down pee-pees, The Princess Bride & Fitzs expletive-filled rants.

Its a FRI-YAY with Sarah & Jason! They react to the NFLs opening night and talk to Chiefs LB Anthony Hitchens about his teams win. They also get in the NBA Bubble, make their NFL division & wild card picks and, on the After-Party, they talk about their Sunday NFL plans and an MLB team in Nashville.

The NFL is back but before it could start the Miami Dolphins released a powerful statement. Dak Prescott comes out about his depression during the offseason Former NFL GM Gary Mueller says that the Chiefs are the best in the AFC but don't forget this team...

No Spain and Fitz tonight on the radio side, but we couldnt leave you hanging without something today! Jason gives a passionate take on the Oklahoma story, as coach Lincoln Riley announced he';s not announcing if any players had positive COVID tests going into games. Jason points out that the fact here is that the NCAA can do NOTHING about this, they are powerless, and that's what people who are calling out OU need to realize. Jason also talks about tomorrow's NFL opener between the Texans and Chiefs. Jason feels like people are not as pumped up for the season as they usually are. Sure there are COVID concerns, not to mention it's political season, but Jason's theory as to why fans aren't as pumped up is because of the Chiefs. The NFL has spoiled us with unpredictability, we're used to seeing years where it's hard to pinpoint one favorite going into a season, but the Chiefs, coming off a title, keeping the majority of their players and staff, have changed that.

Sarah and Jason talk weekend plans and Halloween in the pre-party Did Toronto's Game 3 win mean anything? Did the Washington Football Team make a mistake releasing Adrian Peterson? ESPN Senior Writer Bill Barnwell on how the season will look without a preseason MLB roundup - Mookie Betts has as many homers as the entire Red Sox team Bears going with Mitch Trubisky, and Sarah is sad A look at the US Open with Prim Siripipat ESPN Senior Andre Snellings gets us set for Rockets/Lakers A look at the lighter side of sports

The 1st Pre-Party that the host don't even know what we added to it! Courtney Cronin joined the show to talk about the comments of Kirk Cousins. Mina Kimes is all for rookie QB's starting early and Minnesota Timberwolves Head Coach Ryan Saunders says the Social Justice needs to continue to be the biggest conversation.

Solo Sarah says it is not time to panic for Bucks but the numbers are not looking good. Washington Post Writer Sally Jenkins explains why the NFL has stepped into the Washington Football team investigation. Does President Trump really want BIG 10 football back or is their another reason? Make sure to check the After-Party where Sarah rants about something you wouldn't expect.

Sarah & Jason talk about the loss of Chadwick Boseman, Cliff Robinson & John Thompson. Jamal Murray showed the world that NBA players are playing for more than just a Championship. Former Jaguars OL, Leon Searcy joins the show with a message for the Jacksonville Jaguars and Jeff Passan started the Fantasy Football trash talk early this year.

Sarah & Jason discuss what the stoppage of play accomplished for the NBA & WNBA. Atlanta Dream Guard, Renee Montgomery stops by to talk about what she is doing outside the bubble to help her community. Mina Kimes joins to talk about the likeihood of NFL players protesting games and Sarah and Jason discuss drinks at the After-Party.

In todays episode of the podcast, Sarah and Jason talk to Pistons head coach Dwane Casey about the recent NBA boycotts, Chicago Sky head coach James Wade about how the WNBA has supported their players with social justice issues, and Washington Post reporter Liz Clarke about the papers explosive story about Dan Snyder. Sarah and Jason also weigh in on the Waahington football team report, and give us some fun in the post party, including what places they miss going to most, and even though Fitz never pays off his bets, he still wins.

Sarah and Jason discuss the boycotts around the NBA, WNBA and baseball, and whether the boycotts, and possibly leaving the bubble entirely, will help or hurt their cause. They also mention that people are stuck on the idea of whats next for the NBA season, when we should be focused on the players who want to be heard and are feeling trapped because of the pain theyll suffer, whatever decision they make - to continue playing in the bubble or shutting things down.

Weeknights on ESPN Radio, Sarah Spain and Jason Fitz take you through the nights action and dive into the big sports topics, with guests that are in the know& Spain & Fitz, airing live 7-9PM eastern. Those conversations and some unique podcast content can be found here in each nights episode of the Spain & Fitz podcast.