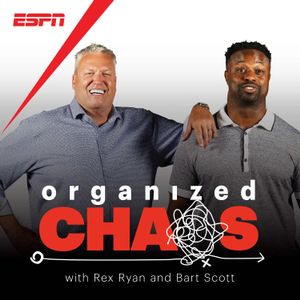 Every Sunday night during the NFL season, from Week One through the Super Bowl, longtime coach Rex Ryan and former linebacker Bart Scott team back up for an unscripted, instant reaction podcast to all the day's games - what worked, what didn't, who gets the credit AND the blame..."Can't Wait" until Monday? Follow and listen to Organized Chaos with Rex Ryan and Bart Scott... though likely more "chaos" than "organized."

Bart Scott and Rex Ryan recap the Super Bowl after the LA Rams beat out the Bengals to win the title! Including some of the terrible calls that may have cost Cincinnati a chance to win the big one. Plus, they give their take on who they expect to be there next year, and what these teams have to do to be in the conversation. All that and more!

Bart Scott and Rex Ryan recap what went wrong with the Chiefs, and give props to Joe Burrow who leads the Cincinnati Bengals to the Super Bowl in his first year as a starter, and how Jimmy G halted the 49ers season. Plus, they also review some of the coaching hires made this week and direct the news about Tom Brady's possible retirement.

Bart Scott and Rex Ryan sound off on the Bill's decision to kick the ball deep with 13 seconds to go, the incredible comeback attempt by the Tampa Bay Bucs in what could be Tom Brady's last game, and the matchups set for the Conference Championships, all that and more!

Bart Scott and Rex Ryan discuss the fiasco coaching jobs that ended the seasons of both the Cowboys and the Cardinals, the impressive performances of the Bengals, and give their takes on who impressed them the most going forward with hopes of winning the Super Bowl.

Bart Scott and Rex Ryan wrap-up the regular season after watching the Chargers and Raiders battle it out to see who gets the right to represent the last AFC team in the playoffs, and the two look ahead to the Playoffs as the field is finally set, all that and more on Organized Chaos!

Bart Scott and Rex Ryan discuss Week 17 and all of the playoff implications that are on the line, including the Bengals keeping themselves alive for the #1 seed in the AFC with a win against Kansas City, the 49ers beating the Texans, and the Titans dominant win against Miami. Also, Antonio Brown's outburst and what it means for the Bucs playoff hopes.

Bart Scott and Rex Ryan recap a thrilling Week 16 that saw the Bills get revenge over the Patriots, the Cowboys demolish the Washington Football Team, and saw the Chargers get upset by the lowly Texans, plus what Week 16 will mean for the Playoffs getting forward. All that and more!

Bart Scott and Rex Ryan recap Week 15 in the NFL including Arizona being defeated by the Detroit Lions, the Ravens falling to the Packers after yet another failed two-point conversion, and Tom Brady and the defending champs being shut out by the New Orleans Saints, all that and more!

Mike Tannenbaum and Rex Ryan discuss an exciting week 14 in the NFL that saw two thrilling overtime games that could have huge playoff implications, the Browns barely defeat a Lamar Jackson-less Ravens team, the Chiefs dominate the Ravens, and so much more!

Bart Scott and Rex Ryan discuss a thrilling Week 13 in the NFL including the Steelers and getting a huge win after a failed Two-Point Conversion against Baltimore, the Bengals getting dominated by the Chargers, the 49ers blowing a must-win game and the surging Dolphins continuing their hot streak, all that and more!

Americas collective adoration of the underdog means that people love to hate Tom Brady. In the world of sports, hatred is inevitable, so why are haters always gonna hate? And in the context of sports, could hate be a positive thing? What might it take to change one fans mind? Featuring: 12-year-old viral Brady-hater Ace Davis, Asst. Prof. of Psychology at Univ. of Central Arkansas Marc Sestir, and Chad Neidt, the Broncos fan who wrote the FU Tom Brady song. Thanks to Chad Neidt, Brandon Perna & ThatsGoodSports, 12:05 AM Productions, LLC / Jimmy Kimmel Live! and Lex 18 News for the clips used in this episode.

Bart Scott and Rex Ryan recap an incredible Week 12 in the NFL that saw the Bengals come away with a statement win against the division rival Steelers, the Bucs squeak out a victory against Carson Wentz and the Colts, and the Patriots continue rolling against the Titans. All that and more!

Bart Scott and Rex Ryan discuss a thrilling Week in the NFL which saw three division leaders lose, Kyler Murray and Lamar Jackson's backups getting the win for their teams, the Chiefs topple the Cowboys, Philly running all over the Saints defense, and the Chargers survive a ferocious Steelers comeback. All that and more!

Whether you love him or hate him or are somehow completely indifferent, youve probably spent at least some of the last 20 years thinking about Tom Brady. Brady has altered friendships, families and communities. Hes changed the trajectory of careers and reputations, enabled fairy tale dreams to be both realized and dashed. 'Man In the Arena' is a new 10-part series from ESPN and Religion of Sports that looks at those two decades of Brady through the eyes of the fans and the haters, those in the arena and those outside. Host Gotham Chopra grapples with these big themes, while grounding the podcast in his personal relationship with Tom and his journey from a Brady fan to Toms friend. ÿListen on Apple Podcasts (https://apple.co/3FgQalz), Spotify (https://spoti.fi/3c6q4oB), or search 'Man In the Arena' wherever you're listening now.

Bart Scott and Rex Ryan discuss a thrilling Week 10 including the Patriots dominating the Browns, the Washington Football Team upsetting Brady and the Bucs, the Packers spoiling Russell Wilson's return, and which teams they think can make a real playoff run. All that and more!

In this episode Bart and Rex discuss the biggest storylines of Week 8 including the shocking losses by Dallas and Buffalo, Arizona finding a way to win without Kyler Murray, the Chiefs winning despite a struggling offense, and the Browns finding success after the Odell Beckham Jr. era ended in Cleveland. All that and much more!

Bart Scott and Rex Ryan join to talk about an incredible Week 8 in the NFL that saw both the Jets and the Cowboys pull off wins without their starting Quarterbacks, Carson Wentz making some of the worst decisions you have ever seen, and a preview about what we could expect for the trade deadline this Tuesday. All that and much more!

Bart and Rex talk about the biggest stories in Week 7 including Kansas City getting demolished by Tennessee, the Bengals beating down the Ravens and becoming the number one team in the AFC North, Sam Darnold getting benched for the Panthers, and much more!

Bart Scott and Rex Ryan talk about how the Ravens shutdown Justin Herbert, which teams need to find a new answer at Quarterback, how Kyler Murray keeps on setting himself up to win MVP, how the Cowboys won despite their head coach's decisions, and much more!

Bart Scott and Rex Ryan discuss Week 5 including; the record setting misses by the kickers in the Packers vs. Bengals game, why Mac Jones and the Patriots are not the real deal, the epic clash between the Browns and the Chargers, the struggles that continue to plague both New York teams, along with much more!

Bart Scott and Rex Ryan breakdown what young quarterbacks impressed them, and how both New York teams got their first wins of the season in overtime thrillers. Plus, a recap of Tom Brady's return to Foxborough, and so much more!

Bart Scott and Rex Ryan break down the Rams making a statement in Week 3 and another set of wild finishes around the league. Plus, they preview Tom Bradys return to New England next week.

Bart Scott and Rex Ryan break down a series of wild endings across the NFL in Week 2 and what teams have made their mark on the league so far this season.

In our debut episode, the guys break down and break apart Week One - the comeback in KC, the Saints whack the Pack, and wins all around in the NFC West... Organized Chaos is here!!!

Every Sunday night during the NFL season, from Week One through the Super Bowl, longtime coach Rex Ryan and former linebacker Bart Scott team back up for an unscripted, instant reaction podcast to all the days games - what worked, what didnt, who gets the credit AND the blame&"Cant Wait" until Monday? Follow and listen to Organized Chaos with Rex Ryan and Bart Scott& though likely more "chaos" than "organized."