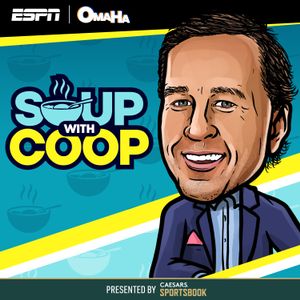 Cooper Manning invites players and coaches from across sports to share stories and laughs while enjoying a bowl of his guest's favorite soup. When the soup is finished, the conversation ends.

Eric Decker on His Football Journey and Past Relationship with Tim Tebow I Soup with Coop: 9/22/22

Eric Decker shares stories of growing up in Minnesota as a multi-sport athlete. Why did Decker attend the University of Minnesota after growing up wanting to be a baseball player? Decker also details why he ultimately selected Football over Baseball following a conversation with local and Twins legend Joe Mauer. Plus, Decker shares his thoughts on becoming a Denver Bronco alongside Tim Tebow. Finally, Decker discusses how he became a reality star, and the powers of being financially responsible as a former athlete.

Brian Urlacher on the Chicago Bears and Playing Golf with Michael Jordan: 9/8/22

Cooper Manning and Brian Urlacher eat soup and chat about all things football. Brian talks about being recruited out of New Mexico and being drafted by the Chicago Bears. Brian shares stories of playing golf with Michael Jordan and witnessing MJs legendary competitive streak. Brian discusses being inducted into the NFL Hall of Fame and describes the emotions he felt as he waited for call. Brian also reveals who he looked forward to playing with and against and why he would have liked to play with an elite quarterback. Brian also talks about his son playing football now and why he has encouraged him to play other sports.

Cooper Manning and Shaun OHara eat alphabet soup and chat about all things football. Shaun shares stories about Eli Mannings rookie year and what makes New York Giants culture different than any other NFL franchise. Shaun also explains how he ended up at Rutgers University, how Tom Coughlin wouldve handled Hard Knocks and how a bad case of Athletes Foot introduced him to his wife.

Cooper Manning and Brandon Marshall eat soup and chat about all things football. Brandon reflects on his journey to the NFL starting with setting a goal to get there when he was just six years old. Brandon shares his best awkward Eli Manning story and talks about playing for the Giants and Jets. Brandon discusses being recruited by UCF and Florida and explains why he ultimately chose to attend UCF. Brandon talks about being drafted by the Denver Broncos and proving himself going up against Champ Bailey as a rookie in camp. Brandon also reveals the toughest DBs he faced including Darelle Revis.

Cooper Manning invites players and coaches from across sports to share stories and laughs while enjoying a bowl of his guests favorite soup. When the soup is finished, the conversation ends.

Cooper Manning invites players and coaches from across sports to share stories and laughs while enjoying a bowl of his guests favorite soup. When the soup is finished, the conversation ends.