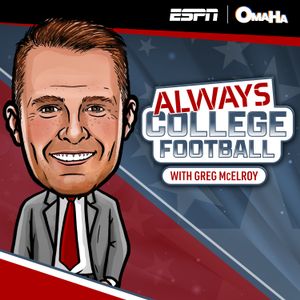 ESPN college football analyst Greg McElroy takes a deep dive into the sport with the biggest names on and off the field. With off-seasons being a thing of the past, McElroy goes year-round with analysis, opinions and insight on top teams and under-the-radar stories from coast to coast.

10 wins is an under-appreciated achievement in College Football so Greg McElroy looks at three teams from last year - Iowa, Kentucky, Baylor and breaks down if they can do it again in 2022. Plus McElroy reacts to the news of Sam Hartman being out indefinitely.

Pittsburgh Head Coach Pat Narduzzi joins Greg McElroy to talk about all things Panther football including defending the ACC title and why he likes jumping in the cold tub in camp. Also coach Narduzzi talks about NIL and the excitement about opening up against West Virginia in the backyard brawl. Plus McElroy looks at the ACC Coastal as a 3 team race between Pittsburgh, Miami and North Carolina.

10 wins is an under-appreciated achievement in College Football so Greg McElroy looks at three teams from last year - Michigan, Houston and Ole Miss and breaks down if they can do it again in 2022. Plus Greg reacts to the Top 25 coaches Poll and hits the mailbag

Greg McElory continues the QB breakdown with Part 2 - plus we hear from Kirby Smart and Brian Kelly as camps open up: 8/5/22

Greg McElroy breaks down some of the best QBs in College Football including Stetson Bennett, Hendon Hooker, Malik Cunningham, Dorian Thompson-Robinson and many more. Plus we hear from Brian Kelly and Kirby Smart as camps start to open up around the country.

Greg McElroy gives HOPE to Florida State, Texas Tech, Auburn and Stanford fans that their teams will be better in 2022: 8/4/22

Florida State, Auburn, Texas Tech and Stanford have not been themselves and Greg McElroy is here to give the fans hope that they will bounce back this year and maybe even beat the Vegas odds. Plus McElroy talks about the news that Tommy Tuberville will lead the latest congressional push for NIL regulation.

Greg McElroy looks at the top Quarterbacks in College Football this year - not just Young, Stroud and Williams: 8/3/22

Greg McElroy breaks down some of the top quarterbacks in College Football heading into the year. Will Tyler Van Dyke, KJ Jefferson, Will Rogers and Devin Leary take the next step? Can transfers Spencer Rattler and Dillion Gabriel jump in and improve at South Carolina and Oklahoma? Plus McElroy answers mailbag questions about QB competitions at Clemson, Texas A&M and Notre Dame.

BYU Coach Kalani Sitaki visits the show plus McElroy tells everyone why being an independent in CFB is that bad.: 8/2/22

BYU Head Coach Kalani Sitake joins the show to talk how joining the Big 12 wil help recruiting, the greatness of having an independent schedule over the past 10 years and why he doesnt hate Utah as much as you might think.

McElroy shares why Tennessee, Nebraska and Louisville are on the rise; plus we play CFB Low Hanging Fruit: 8/1/22

Can Tennessee, Nebraska and Louisville improve on their win total from last year? Greg McElroy thinks so and gives you the reasons why. Plus, does Stetson Bennett get enough credit, is the ACC just Clemson, and is the rivalry between the Pac-12 and Big 12 actually good for college football? Greg answers those questions in a new game called Low Hanging Fruit.

Which first year head coach is under the most pressure? Greg McElroy lets you know, plus he breaks down the Pac-12: 7/29/22

Is there more pressure for a first year coach in the SEC or at big blue blood programs like USC, Oklahoma and Notre Dame? What should the expectations be for the three new coaches in the ACC? Who needs to perform quickly in the great Northwest? Greg McElroy answers all of these questions in the latest Always College Football.

McElroy talks about the UGA/FL game in Jacksonville, ranks his P5 conference champions most likely to repeat and looks ahead to Pac 12 Media Days with Jon Wilner: 7/29/22

McElroy understands why Kirby Smart wants the UGA/FL game out of Jacksonville. Plus he ranks the P5 conference champions on probability of repeating. Jon Wilner also joins the show to talk Pac-12 in the wake of USC and UCLA leaving for the Big 10 and why its not ALL Larry Scott's fault.

Chris The Bear Fellica joins Greg McElroy to talk over/under win totals for Oklahoma, Nebraska, Auburn. Plus Fellica gives a few of his sleeper picks and McElroy answers a mailbag question on if Texas A&M is ready to take over the SEC West

Penn State quarterback Sean Clifford joins Greg McElroy to talk about name, image, likeness and what his company LIMITLESS NIL will help do for current and future athletes. Plus Sean answers questions about his injury last year and how far the Nittany Lions can go in 2022.

Greg dives into the news coming out of Knoxville before his interview with Purdue HC Jeff Brohm. Brohm stops by to discuss preparing for a big game in week one, his creativity when it comes to play calling, the current status of the B1G, and more. We cap off the show with Greg giving his vibe check on if Michigan State is in a position to overtake Ohio State and Michigan to take the East B1G crown.

Greg starts the show by diving into Clemson and while giving his gauge on where their dynasty currently stands. Legendary announcer Joe Tessitore stops by and joins Greg McElroy at SEC Media Days and talks about this years SEC Media Days, the Tess Effect, calling his sons game, Texas is back, and his favorite venues to announce a game at. College Football never stops, and neither does this podcast.

SEC Commissioner Greg Sankey joins Greg McElroy to talk about the future of College Football, plus we look at the History of SEC exhibit in the CFB HOF with President and CEO Kimberly Beaudin.

Paul Finebaum joins Greg McElroy to talk about the future of College Football and what Notre Dame might do. Also McElroy tells us why we shouldnt overlook the defending champs.: 7/21/22

Greg McElroy is at SEC Media Days and sits down with SEC Network's Paul Finebaum who gives his thoughts on the future of Notre Dame and college football as a whole. Plus Finebaum tells stories of media days past.

Greg McElroy is joined by ESPN analyst Cole Cubelic at SEC Media days. The two breakdown the Joe Moore Award and why the O-Line really hates everyone else.: 7/19/22

Greg McElroy is at SEC Media Days and sits down with ESPN analyst Cole Cubelic who gives the real reason offensive lineman hate everyone. Plus Greg talks about Notre Dame media rights and why the Big 12 and Pac-12 are not merging.

Greg McElroy is at SEC Media Days and sits down with Missouri Coach Eliah Drinkwitz who talks about the upcoming Missouri season as well as the Missouri roster and the great spot it's in. Plus Greg breaks down what LSU and Florida can expect from Brian Kelly and Billy Napier respectively and Greg hits the mailbag.

Maryland Head Coach Mike Locksley discusses the improvement of his Terps football team and why Tualia Tagovailoa is one of the best quarterbacks in the country. Coach Locksley also talked about recruiting in the Big 10 and why adding USC and UCLA is a very good thing. Plus Greg breaks down the biggest questions regarding Ohio State, Michigan and other Big 10 East teams.

UNC HC Mack Brown discusses changes in CFB. Coach Brown also talks last year's team that fell short and why this year's team has a chip on their shoulder. Plus Greg talks Big 12 and the major topics surrounding the conference: 7/13/22

UNC Head Coach Mack Brown joins Greg McElroy to discuss the changes he has seen in college football in his 33 years of coaching. Brown also reveals what went wrong with last years team that had so much hype. Plus Greg talks about the Big 12 and why QB play will be the key to the conference and if Baylor is the right preseason favorite.

Alabama head coach Nick Saban joins Greg McElroy to discuss his recruiting pitch not changing much in this new era of college football, success is not being continuum, what drives him up a tree, what he makes of realignment and competitive balance in the sport. Plus, Greg's thoughts on the 2022 Crimson Tide.

USC Head Coach Lincoln Riley discusses becoming the new head coach at USC and why the Trojans are primed for a resurgence. Greg reacts to Riley as the new HC and the instant impact he has brought through transfers and recruiting: 7/8/22

USC Head Coach Lincoln Riley joins Greg McElroy to discuss changing the culture at USC and expectations for the upcoming season. Riley also reveals why he thinks USC can have the best roster in College Football. Greg talks about what changes Lincoln Riley and his staff will bring to the program. Plus Greg answers a mailbag question about PAC-12 member Stanford and if they should be in lockstep with Notre Dame.

Steve Sarkisian on the Longhorns upcoming season, Greg reacts to USC and UCLA joining the Big 10 and Arch Manning committing to Texas: 7/5/22

Texas Head Coach Steve Sarkisian joins Greg McElroy to discuss changing the culture at Texas and expectations for the upcoming season. Sarkisian also reveals lessons he learned from coaching legends Pete Carroll and Nick Saban. Greg reacts to the news of USC and UCLA planning to join the Big 10 and explains what Arch Manning committing to Texas means for the Longhorns. Greg discusses what it will take for Miami and Nebraska to return to prominence.

ESPN college football analyst Greg McElroy takes a deep dive into the sport with the biggest names on and off the field. With off-seasons being a thing of the past, McElroy goes year-round with analysis, opinions and insight on top teams and under-the-radar stories from coast to coast.