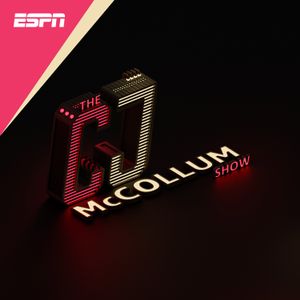 Every week New Orleans Pelicans star CJ McCollum discusses the biggest names and storylines in and around the NBA with an inside perspective you can only get from someone in the locker room and on the floor.

On the CJ McCollum Show, CJ McCollum and Izzy Gutierrez welcome Brian Windhorst for a Hoop Collective crossover episode! They discuss cryptocurrency in the NBA, strategies for gambling in the casinos (06:50), and how dangerous the Pelicans are with Brandon Ingram and Zion Williamson (23:40). Plus, what teams to watch as the season moves full steam ahead (44:03).

On the CJ McCollum Show, CJ McCollum and Izzy Gutierrez discuss why there are currently 7 players averaging 30+ PPG (01:24), the outstanding play of Jose Alvarado, aka Grand Theft Auto (24:30), NBA players that receive negative tweets (27:17), and MORE!

The CJ McCollum Show, CJ McCollum and Izzy Gutierrez discuss NBA games being the closest they've been since 2014 and some of the top 10 players leading scoring in the league right now (00:40). CJ then welcomes Warriors Andre Iguodala to talk about what it takes to win a championship in the NBA (20:07), how the league has evolved on and off the court over the years (30:14), some reflection on his long-decorated career (55:38), and more!

The CJ McCollum Show, CJ McCollum and Izzy Gutierrez discuss the undefeated Milwaukee Bucks and Pacers' Myles Turner asking for a trade to the Lakers (4:40). CJ then welcomes Teresa Weatherspoon, a current assistant coach of the New Orleans Pelicans and former professional basketball player, to talk about her journey to from college to the WNBA during her Hall of Fame basketball career (18:48), transitioning to coaching in the NBA with the Pelicans and supporting Zion Williamson on his journey back to the court (27:00), and her thoughts on a woman becoming head coach in the NBA (43:48).

CJ McCollum and Izzy Gutierrez discuss Brandon Ingram and Zion Williamson to injury in loss (01:46), CJ's adjustment to playing with the Pelicans (12:18), how teams are looking at the start of the season (18:52), and where Chris Paul ranks among NBA players after reaching 11,000 career assists (32:44).

CJ McCollum and Izzy Gutierrez discuss Zion Williamson's return to the Pelicans(02:49), Lakers consider Russell Westbrook coming off the bench (12:14), if Anthony Davis can be an MVP-caliber player (19:53), what do Warriors' extensions for Poole, and Wiggins mean for Draymond (23:35), and how Ben Simmons feels about criticism (29:46).

The Draymond Green-Jordan Poole fight and its effect on the Warriors, international basketball and the 'Redeem Team' and NBA Western Conference predictions: 10/13/22

CJ McCollum and Izzy Gutierrez take a look back into CJ's journey to the NBA (03:13), before discussing the Draymond Green-Jordan Poole fight and how the incident affects the Warriors(14:34). Then they get into the 'Redeem Team' documentary and how important the NBA is for the growth of basketball internationally (28:04). Plus, covering the NBA Western Conference predictions for the 2022-23 season (43:20).

CJ McCollum discusses news updates on Suns owner Robert Sarver (0:53), what to expect from Zion Williams as he returns to the Pelicans (03:15), and NBA prospects Victor Wembanyama and Scoot Henderson showcasing their talents this week (07:05). Plus, teammate Brandon Ingram joins to chat about his preparation for the upcoming season (10:49), his days at Duke and with the Los Angeles Lakers (31:32) and why he stays off of social media (43:17).

Every week New Orleans Pelicans star CJ McCollum discusses the biggest names and storylines in and around the NBA with an inside perspective you can only get from someone in the locker room and on the floor.