A quick scan of the leaderboards at the biggest golf tournaments in the world on any given week will tell you that the sport's future is in a secure place.

Five of the top 20 players in this week's world ranking are under the age of 30. There's a two-time major champion walking the Earth right now who isn't yet 25, and the reigning PGA Tour Rookie of the Year can't legally buy a beer yet in the United States.

So which players are best-positioned to move from promising to among the world's best? We at Numbers Game present five players who we believe are poised to take the next big steps in their respective careers -- the breakout players of 2014:

Who holds the course record at Pebble Beach Golf Links? (Answer below)

Day's star power in the world of golf is undeniable. At 26 years old and 10th in the Official World Golf Ranking, Day has been a member of the past two Presidents Cup teams on the International side. So it's almost shocking that he has just a single win on the PGA Tour -- and that was in May 2010.

To say Day has a habit of rising to the occasion is an understatement. Day has 10 career top-three finishes in his PGA Tour career. Four of them have come in majors, and four more have come in either WGC or FedExCup events. In 13 career major starts, Day has six top-10 finishes and finished runner-up three times. And on another difficult course setup -- two weeks ago at Torrey Pines -- Day finished tied for second. The South Course at Torrey Pines played an average of plus-1.8 shots over par for the week of the Farmers Insurance Open, by far the toughest course on tour so far this season.

Day is one of two players to finish in the top three at the Masters twice in the past three years. Fellow countryman and last year's champion, Adam Scott, is the other. At the U.S. Open, Day is the only player to accomplish that feat, finishing second in 2011 and tied for second in 2013. 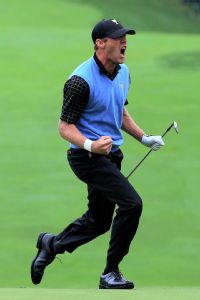 David Cannon/Getty ImagesGraham DeLaet already has a Presidents Cup appearance under his belt, but he could have an even bigger year in 2014.

At the end of the 2013 season, DeLaet's extremely strong play at The Barclays and the Deutsche Bank Championship netted him more than $1 million in earnings and a spot on the Presidents Cup team. His improved putting, however, should lead him to even bigger things this year.

DeLaet's ball-striking ability has never been the question -- last year, he ranked third on tour in greens in regulation percentage (70.5) and led the tour in total driving. He also ranked inside the top 20 in both driving distance and average approach shot proximity. But DeLaet was 76th in strokes gained putting, 120th on putts made between 10 and 15 feet, and outside the top 100 on tour in several other key putting statistics.

DeLaet has finished tied for second in each of the past two weeks, and his putting is no small reason why -- he was 11th in the field in strokes gained putting at Torrey Pines, then sixth at TPC Scottsdale. DeLaet now ranks sixth on tour this season in the statistic, and is third in average distance of putts made. If DeLaet breaks into the winner's circle before the Masters, it should be no surprise.

Just 21 years old and already 22nd in the world ranking, Matsuyama already has a pair of top-10 major finishes to his credit. The two-time Asian Amateur champion is lauded for his swing -- and the early returns in this wraparound season bear that out: top-20 finishes each of the past two weeks, including a tie for fourth at TPC Scottsdale. In 12 stateside official rounds this season, Matsuyama has shot par or better all 12 times with eight of those rounds in the 60s.

Matsuyama currently ranks inside the top 15 on tour in strokes gained putting, driving distance and average approach shot proximity. He's the only player currently in the top 15 in all three of those statistics.

There have been countless superlatives used to describe Spieth's meteoric rise in the past 12 months, and it's hard to say any of them haven't been well-deserved.

Spieth won the John Deere Classic last year at age 19 -- the first teenager to win on tour in more than 80 years. When Fred Couples made him a captain's pick for the Presidents Cup, Spieth became the youngest team member ever on the U.S. side. And two weeks ago at Torrey Pines, he nearly became the youngest two-time winner on tour since 1932. Spieth tied for the most top-10 finishes on tour last year with nine, and was the first player since Tiger Woods in 1996 to go from no tour status to qualifying for the Tour Championship. We at Numbers Game would call that a decent year, to say the least.

Spieth doesn't have a top-20 finish in four major starts, but the 20-year-old definitely has the talent and demeanor to win on golf's biggest stages, as his amateur career would seem to dictate. In Spieth's lone full season at the University of Texas, he was a Ben Hogan Award finalist and led the Longhorns to the NCAA championship. He's also one of just two players to win the U.S. Junior Amateur multiple times. The other? Tiger.

With a near-flatline heart rate seemingly at all times, the unflappable 24-year-old is already a two-time winner on the PGA Tour. No player has made more birdies this season than English, who currently is fifth on tour in adjusted scoring average. In 32 official rounds this season, English has carded scores of par or better 31 times, including all 16 rounds since Jan. 1.

English has made the cut in all three of his previous major championship starts, and this year will make his first career appearance at Augusta National. Expect English to be a contender during at least one of the majors this year.