NORTON, Mass. -- The newest craze on the PGA Tour -- the belly and long putter -- has captured the attention of Phil Mickelson, who is practicing with one on Thursday morning during the pro-am at the Deutsche Bank Championship at the TPC Boston. 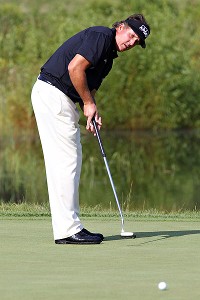 AP Photo/Stew MilnePhil Mickelson tested out a long putter Thursday during a pro-am at the TPC Boston.

Call it a fad or the future of putting, belly or long putters have been in the winner's circle six times in 2011, including the PGA Championship, where Keegan Bradley became the first to win a major using one.

But will he put it in the bag Friday in the first round?

Mickelson, long considered to have one of the best short games in the sport, is ranked 89th on tour in total putting. Inside 10 feet -- the distance where the pros make their cash -- he is ranked a measly 84th, converting from that range only 57 percent of the time.

Mickelson has tried to read putts with his feet more and has worked with putting guru and former PGA Champion Dave Stockton after years of advice from Dave Pelz. Mickelson still works with Pelz on other aspects of his short game.

ESPN.com senior golf writer Farrell Evans has taken to Twitter. See what he's got to say about all things golf. Follow @EvansESPN

At the Masters, Mickelson even keeps a special diary for those treacherous greens. But nothing seems to have cured the short misses.

It's uncertain if he plans to take the belly putter into competition Friday for the first round. But what is clear is that he's searching for answers where others have found great success over the past year.

Farrell Evans covers golf for ESPN and can be contacted at evans.espn@gmail.com