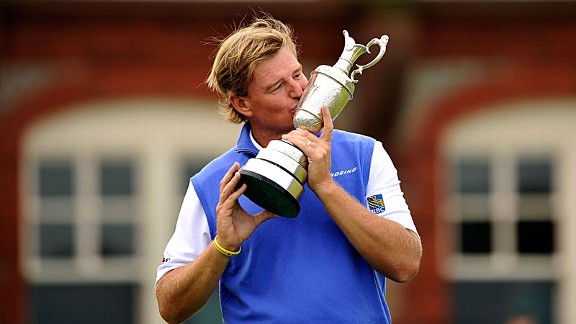 The British Open, or The Open Championship, operated by the R & A, is the third of four major tournaments of professional golf's calendar year. First contested in 1860 at Prestwick Golf Club in Scotland, the British Open is played at one of a number of selected links courses throughout Great Britain. Golf's oldest major annually features one of the strongest fields of participants in the sport, who traditionally encounter tough weather conditions and difficult bunkers on coastal courses. Each year's field of golfers also includes those who qualify through regional events within Great Britain along with international qualifiers.

The first British Open dates all the way back to 1860, when Willie Park won the inaugural edition played at Prestwick Golf Club in Ayrshire, Scotland, to capture the Challenge Belt, made of leather and featuring a silver buckle and emblems.

While Scotsman Park would go on to win again in 1863 and 1866, Old Tom Morris won the tournament in four of the first eight years. Just 10 years after The Open Championship was started, Young Tom Morris won for the third consecutive time at Prestwick in 1870 and became the permanent owner of the belt.

Following a year without The Open Championship in 1871, the competition resumed the following year. An agreement was reached between three clubs that were going to host the tournament -- Prestwick, the Honourable Company of Edinburgh Golfers (at the Musselburgh course) and The Royal and Ancient Golf Club at St. Andrews, known as the "Home of Golf." It was decided that the winner would receive a medal and that each of the three clubs would contribute towards the cost of a new trophy, which was a silver claret jug.

With the courses rotating hosting duties in the following years, other golfers dominated with impressive streaks -- Jamie Anderson won three straight from 1877 to 1879, while Bob Ferguson captured three in a row from 1880 to 1882. (It would take a long time before the British Open saw that kind of dominance again. The next person to win three in a row was Peter Thomson, from 1954 to 1956.)

When the Honourable Company of Edinburgh Golfers moved from the Musselburgh course to Muirfield in 1891, the championship venue also moved. One of the oldest golf clubs in the world, and the source of the earliest written rules of golf (dating to 1744), Muirfield first hosted the British Open in 1892, when the event was extended from 36 to 72 holes. Harold Hilton, one of only three amateurs to have lifted the Claret Jug, topped the field that year.

In 1894, the Open Championship was held outside Scotland for the first time at Royal St. George's Golf Club in Kent, England. And while Scottish professionals continued to dominate the event, the rise in players entered year after year led to a cut being introduced after two rounds of the tournament by the end of that decade.

Harry Vardon won three times during the 1890s and went on the capture three more by 1914, when original site Prestwick hosted for its second to last time. His six victories are the most by any golfer in British Open history.

The Open Championship was not played from 1915 to 1919, due to World War I, but was revived in the 1920s as American golfers began to make their mark in the tournament. Walter Hagen claimed the trophy four times during the decade and the legendary Bobby Jones won three times as an amateur between 1926 and 1930.

A number of additional links courses were introduced into the tournament's hosting rotation during that period, including Royal Lytham and St. Annes, Royal Troon and Carnoustie Golf Links, where Englishman Henry Cotton won his second British Open in 1937.

Following another stretch of years without the tournament -- from 1940 to 1945 because of World War II -- the British Open resumed play in 1946 at the famed St. Andrews, which would go on to host a record 28 times. Australian Peter Thomsen and South African Bobby Locke dominated the early post-war years at the Open Championship, with each winning four times in the ten tournaments between 1949 and 1958.

The Claret Jug was won the following year by another South African, Gary Player, one of professional golf's "Big Three" who took the sport to new heights of popularity during the 1960s. Player, Arnold Palmer and Jack Nicklaus each captured the British Open two times each by 1970, with both Nicklaus and Player winning one more time in the 1970s.

Nicklaus -- who finished in the top five at the British Open 16 times -- almost garnered another title in 1977 but lost out to fellow American Tom Watson in one of the most dramatic duels in golf history. The two were paired together for the final two rounds at Turnberry and finished 10 strokes ahead of the field, with Watson shooting two straight 65s to edge the Golden Bear by one stroke.

Watson captured five British Opens between 1975 and 1983, but there was only one American winner In the 11 years following his final victory. European champions during that stretch included Spain's Seve Ballesteros, Englishman Nick Faldo and Sandy Lyle, who was the first Scottish winner in over 50 years.

Greg Norman's victory in 1993 was among the dramatic and historic moments during the 1990s. He shot a 64 in the final round at Royal St. George's, producing the lowest final round score for an eventual champion. Two years later, John Daly earned an improbable win in a four-hole playoff after leader Constantino Rocca struggled on the 18th hole but nailed a 65-foot putt to send the tournament into extra holes. And in 1999, France's Jean Van de Velde took a three-stroke lead to the 72nd tee. But he botched several shots and finished with a triple-bogey that left him tied with Justin Leonard and Paul Lawrie, who prevailed in the playoff.

Daly's win began another successful period for U.S. golfers at the British Open. Over a 15-year span from 1995 to 2009, Americans took home the Claret Jug 11 times. That stretch included three wins by Tiger Woods, including the 2000 title when he shot below 69 in all four rounds to set a major championship record, finishing at -19. In 2007, Ireland's Padraig Harrington ended a seven-year drought without a European champion when he won the first of two consecutive titles.

The Open Championship uses a rotation of nine venues to host the event -- St. Andrews, plus four more in Scotland and four in England. From 1987 through 2011, the hosting rotation followed a specific formula, in which England and Scotland alternated hosting years, with St. Andrews hosting every fifth year (years ending in 0 and 5). However, the rotation is being reversed beginning in 2012, meaning England will host the event in consecutive years. The current nine courses in the rotation are:

Royal St. George's Golf Club is an 18-hole links golf course located in Sandwich, Kent, England, and one of the sites used in rotation to host the British Open (The Open Championship).

Designed by Dr. Laidlaw Purves and Ramsey Hunter, Royal St. George's Golf Club was the first venue outside of Scotland to host the British Open, in 1894, just seven years after the club was first formed. The course covers a series of hills near Sandwich Bay, with dunes, bunkers and the wind presenting challenges to golfers.

Royal St. George's Golf Club has hosted 13 British Opens, the most recent coming in 2003, when American Ben Curtis, a PGA Tour rookie competing in his first major championship, outlasted the favorites in the field to win the Claret Jug. Other Open winners at Royal St. George's include Harry Vardon, Walter Hagen, Henry Cotton and Bobby Locke.

The prestigious course in Kent will host the 2011 British Open. It has been lengthened by 100 yards for the event, yet par for the Open course is being reduced from 71 to 70 as its notable fourth hole -- which features a huge bunker -- is being changed from a 497-yard par 5 to a 495-yard par 4. Four other holes will increase in length for the 2011 tournament, which will be the 14th Open contested at Royal St. George's Golf Club. 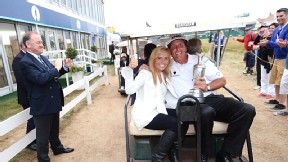 What A Way To End It

Playing the best round of his life, Phil Mickelson is finally bringing home a Claret Jug. Story » Leaderboard »