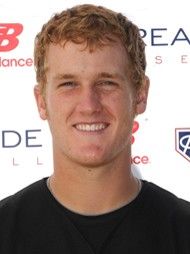 Hensley, a physical arm that was up to 94 mph at the Area Code Games in August, the Ole Miss commit could pitch his way into the first round. Like McCullers, Hensley could end up pitching in relief, but he has a shot to start long term.

Hensley pitched a 5 inning no-hitter on 3/19/12 against Apollo High School in the Coach Bob Invitational in Scottsdale, Ariz. Hensley struck out 11 in the outing.

Hensley signs with the Rebels out of Santa Fe High School in Edmond, Oklahoma, where he helped lead Santa Fe to a 42-7 record, and appearance in the state playoffs and a ranking of third in the state of Oklahoma.The right-handed hurler was named an ESPN RISE All-America first team selection along with fellow signees Gavin Cecchini and Matt Denny, and is rated as the No. 37 prospect in the nation by Perfect Game. He was also named an Under Armour All-America selection and competed at the Under Armour All-America game and the Area Code Games.

"Ty is a tremendously talented athlete both on the mound and at the plate," Ole Miss assistant coach and recruiting coordinator Carl Lafferty said. "On the mound he is a power arm with a very good breaking ball. Offensively, he's a switch hitter with a tremendous amount of power. We look for him to make an impact immediately here at Ole Miss. He's one of the top players in the country."

Are you a top baseball recruit? Send us your info to be included in the ESPNHS baseball database.