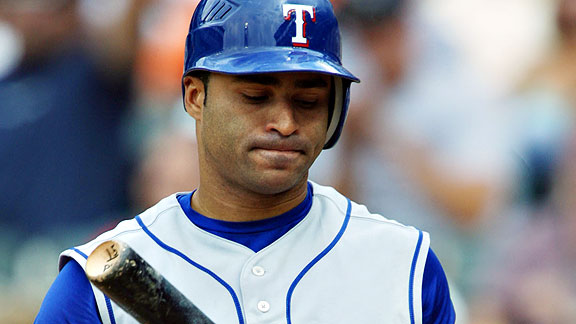 In March of 2007, as headlines were swirling that a former outfielder for the Texas Rangers bought human growth hormone from an online pharmacy, the club's GM, Jon Daniels, confidently defended his drug-prevention efforts to reporters.

"We give our players as much, if not more, information and education about the problems with performance enhancing than any other club," Daniels said.

As it turns out, much of the information the Rangers were giving their players was wrong.

This official "Off Season Strength & Conditioning Guide" -- obtained from a family member of a player who received it before the 2007 season -- shows how poor the information circulating in baseball was as recently as just three years ago.

The manual deals broadly with things that are important to a fitness-minded team, such as speed, plyometrics and throwing progression. But a chapter called "Harmful Substances" tackles the chemical side of the game head-on.

"Often there is a temptation to seek other ways of increasing your capabilities," it starts. "The goal of this section is to inform you of the detrimental effects and the legal consequences of using chemicals as performance enhancers."

Unfortunately, the Rangers fell far short of that goal when it came to the most basic details. HGH, for instance, is included in a list of commonly used steroids, even though it isn't a steroid. (It's a synthetic chain of amino acids.) Elsewhere, the manual notes that steroids "have been classified as drugs controlled by the Food and Drug Administration," although the agency that regulates and controls them is the Drug Enforcement Administration.

Perhaps those could be dismissed as typos. But it's harder to square the Rangers' description of DHEA, a popular testosterone booster, as not being "banned by the USOC ... because it is so new on the market." In fact, it has been around at least since the early 1990s and was formally banned by the World Anti-Doping Agency in 2004. (It remains legal in baseball.)

When shown the Rangers' guide late last week, Rob Manfred, MLB's executive vice president of labor relations, distanced himself from the effort. "Our office had no role in the creation of the document in question," said Manfred, who oversees drug-testing policy for MLB. "Both the Commissioner's Office and the Club recognize [it] is flawed in a number of respects. It was, however, an early, well-intended effort at steroid education."

In a subsequent e-mail to The File, Daniels elaborated, saying: "The document has not been distributed by the Rangers for several years and was produced by an individual no longer in the Texas organization. Its intent was to educate our players on the topic. We felt it was important they understand the limited benefits and significant risks involved. In hindsight, we may have supplied too much information, although the content was fairly standard."

Actually, the effort is curiously selective, going into depth about some things while ignoring others. There's no mention, for instance, of HCG, the popular testosterone-producing drug that would become better known to the public when Manny Ramirez got a 50-game suspension for using it. And the BALCO drugs that had been in the headlines for four years to that point -- the Clear and the Cream -- might as well never have existed.

Yet an entire section was devoted to Clenbuterol, a staple of the bodybuilding scene since Arnold Schwarzenegger's "Pumping Iron" days. The manual notes that Clenbuterol is "a drug used by veterinarians to increase muscle mass in livestock [and] is being used by many athletes, primarily those in strength-related sports." Only next does it add -- vaguely and without elaboration -- "An increase in muscle strength [sic] have not been shown in humans."

In another area, the Rangers detail what they call the "street names" for 16 commonly used anabolics, including Boldenone, Clostebol, Fluoxymesterone, Nandrolone, Stonozolol and testosterone. Yet there's no accompanying definitions or descriptions.

And then there's this line about HGH, noting: "Athletes have been known to use HGH at a black market cost of about $2,000 for an 8-week course." Black market cost?

"I'd never give this to my players," said one rival executive who was shown the manual last week. "It reminds me of those people who post the plans to the atomic bomb and then say they're just trying to make the world safer."

To be fair, the Rangers may have been trying to change an entrenched clubhouse culture that, by Alex Rodriguez's subsequent admission, involved steroids use as early as 2001 and had been rocked by the publication in 2005 of Jose Canseco's book, "Juiced."

In December 2005, when Daniels was just two months into his tenure as GM, he e-mailed then-owner Tom Hicks in the midst of trade talks for Miguel Tejada, expressing "some steroid concerns" about the infielder. (The Rangers passed.)

By March 2007, when Sports Illustrated set off a furor by breaking the news that former outfielder Gary Matthews Jr. had ordered growth hormone while wearing a Rangers jersey, investigators for Sen. George Mitchell were crawling all around the club. Nine months later, the Mitchell report was released identifying two current Rangers -- Eric Gagne and Jerry Hairston Jr. -- who were said to have bought human growth hormone during stints with former teams.

What's astonishing about reading the manual now is how old and new it feels at the same time. Back then, Bud Selig had already testified before Congress, and MLB was supposed to have been turning a new corner. For a team to be this backward so late in the game is alarming. It gives you an idea of how the drug problem in baseball was allowed to fester for so long.

By the same token, MLB has made significant enough strides that it's hard to imagine the same thing happening today. In 2009, the league and the players' union created the new position of Joint Strength and Conditioning Coordinator. According to a press release, the position will "provide guidance to and identifying best practices for Clubs and Players on issues involving conditioning, fitness, nutrition and other related subjects."

Today, as the Rangers play on in their first American League Championship Series, Daniels sounds very much like he did back then, saying, "We currently have what we feel is one of MLB's best PED education programs and we conduct seminars each year to educate our players and provide available resources as needed."

You can only hope that his 2007 strength guide is, like a lot of things about this reborn team, just a bad memory.

ANTHONY GALEA INDICTED: How prevalent is HGH in sports nowadays? Judging from this indictment of Toronto doctor-to-the-stars Anthony Galea, MLB's investigation just scratched the surface. Galea is accused of making more than 100 trips to 13 American cities between October 2007 and September 2009 so he could give pro athletes performance enhancers like HGH and Actovegin, a derivative of calf's blood not approved for use in the U.S. His specialty is a plasma treatment used for speed healing that involves extracting blood from patients and re-injecting just the plasma. Among the athletes who were treated by Galea were Tiger Woods and A-Rod, though both denied getting performance enhancers from him. This affidavit from federal agent Justin Burnham is as gripping as anything in the Mitchell report.

BONDS TRIAL TO START: We know the wheels of justice grind slowly, but does anyone else think that the Barry Bonds perjury trial, which is finally due to start in March, feels strangely bygone -- like someone made a film out of the Mitchell report and then waited until no one cared to release it? As you can see from this prosecution witness list, which includes the Giambi brothers and Bobby Estalella, the prosecution plans on rocking like it's 1999.