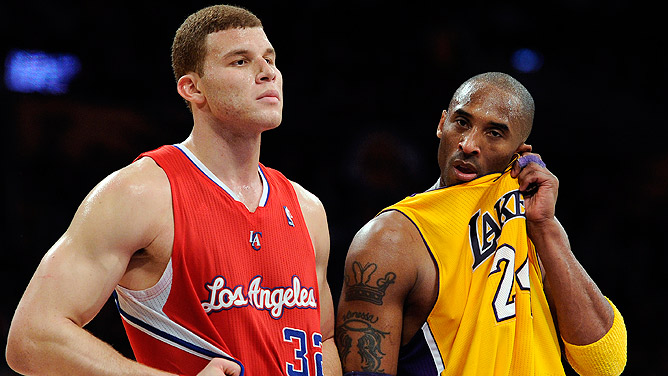 
• The Los Angeles Times' Mark Medina takes Kobe's passing of Elvin Hayes for seventh-place on the NBA's all-time scoring list as an opportunity to discuss just how well Bryant's been able to preserve his health and physical well-being over time, just like Hayes. This is his 15th season, after all:

"What's sometimes lost in Bryant's ongoing quest to maintain basketball excellence amid his injuries is how he's managed to remain on top and evolve despite all the wear and tear. It's intriguing to wonder how much Bryant can get out of a diminishing shelf life and, in the case of the NBA's all-time scoring list, who else he'll be able to pass," Medina writes. "As Bryant goes through that process, however, it's also necessary to look at it out of appreciation that he's made it this far already."


• SportsIllustrated.com's Hot Clicks blog passes along a humorous video that shows Kobe throwing a towel at Lamar Odom's face after he missed two free throws during Sunday's win over the Oklahoma City Thunder. Up for debate is whether or not it was intentional.


• Yahoo! Sports' Kelly Dwyer showcases another video from Sunday's Lakers-Thunder game, this one featuring referee Eli Roe telling Kobe to "make the shot" after he complained about not getting a foul call. Dwyer found the exchange funny and expanded upon it to wonder why Bryant was taking that particular shot in the first place:

"Even Kobe Bryant's most ardent admirers often chafe at the way he forces long two-point shots," Dwyer writes. "With the man's ability to wriggle his way toward freedom closer to the hoop, and especially with his Jordan-esque gifts in the post, why does Kobe always want to seem to chuck those long two-point shots? And complain endlessly when they don't go in?"


• Kent Youngblood of the Minneapolis Star-Tribune talks to Timberwolves swingman Wesley Johnson about Kobe and comes away with one clear conclusion: don't talk trash to Bryant. Johnson made that very clear leading up to Tuesday's Lakers-Wolves game. 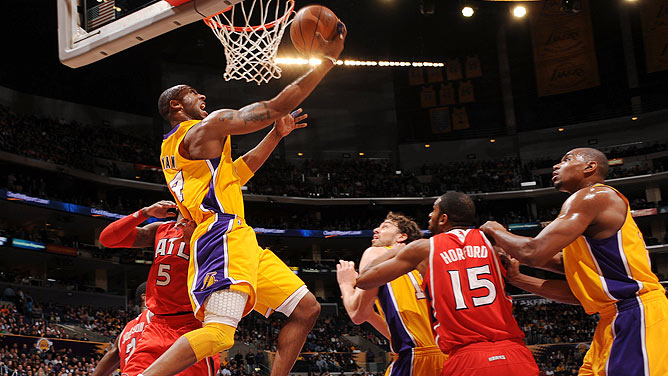 
• USA Today's David Leon Moore presents a humorous exchange with Bryant on the rest of the Lakers 25-game season, which began Tuesday against Atlanta. Moore asks Bryant if his team should still be expected to contend for the NBA title, warts of the final week before the All-Star Game and all:

So what's wrong with the Lakers?

When will it get better?


• BusinessWorld's Anthony Cuaycong argues that Bryant wasn't just super-motivated to win the MVP award during the All-Star Game last weekend. It more than that, he says. He knew he was going to win it:

"Kobe Bryant knew from the moment he stepped onto the hardwood that he was going to win the Most Valuable Player award," Cuaycong writes. "He was after posterity; his fourth trophy would rank him alongside Bob Pettit as the most decorated participants in the history of the National Basketball Association All-Star Game, and far be it for him to waste the opportunity to etch his name in stone in front of certified Laker diehards."


• The Philadelphia Inquirer's Bob Cooney goes back to the start of the game Sunday and remembers what Bryant told the fans in attendance when he took the microphone. Cooley also smartly notes that Bryant's dynamic performance was a stress-releaser for him and a way to get out a lot of his building frustration. 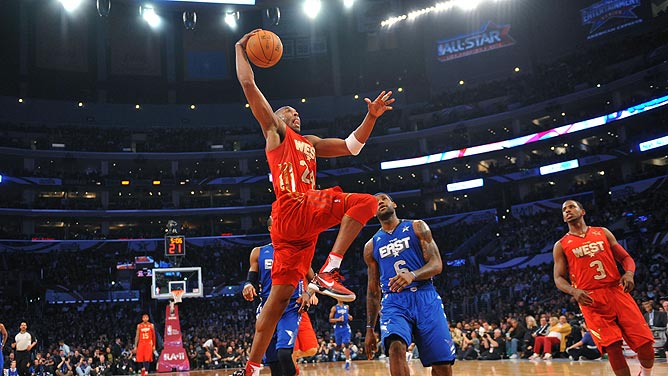 
• The Washington Post's Michael Lee presents in his report from the All-Star Game a polished argument that Kobe displayed he's still the man to beat in the NBA with his Sunday performance:

"Bryant may be getting up in age and his right knee may be getting a little creakier, but with a younger generation of players coming after him, the 15-year veteran remains unwilling to surrender his spot atop the league hierarchy. And on Sunday, he used the NBA's annual homage to opulence as an opportunity to prove, once again, that he was the best player on the floor."


• NESN.com's Michael Hurley recounts an exchange between Bryant and FoxSports.com reporter Jason Whitlock after Sunday's game, with Bryant providing a humorous response to what some called a leading question from Whitlock:


• Lakers.com's Mike Trudell argues that Kobe's MVP performance Sunday was the best of the four he's received so far in his career, going back to his days as a youngin'. Trudell presents quotes from each team's coach on Bryant's dominance.

"No. 24 looked more like No. 8 as he rose for an array of dunks from various angles, including a baseline reverse early in the first that may have been the best dunk of a game in which he tallied a personal career high of 37 points," Trudell writes.

"He's Kobe. He does things like that, we shouldn't be surprised," said Western Coach Gregg Popovich.


• NBCSports ProBasketballTalk's John Krolik names Bryant as one of his biggest winners at the All-Star Game, reasoning that Kobe was probably the player most responsible for making the game unusually competitive.


• The New York Times' Jonathan Abrams takes a different approach to an assessment of Bryant's performance than most, looking at it from a perspective of its use as a distraction to the incessant Carmelo Anthony trade talks:

"For the second time in four years, the All-Star Game -- despite Kobe Bryant's homecourt mastery and record-tying fourth All-Star Game Most Valuable Player award -- took a backseat to a disgruntled star, and resurrected trade discussions as the deadline to make deals neared." 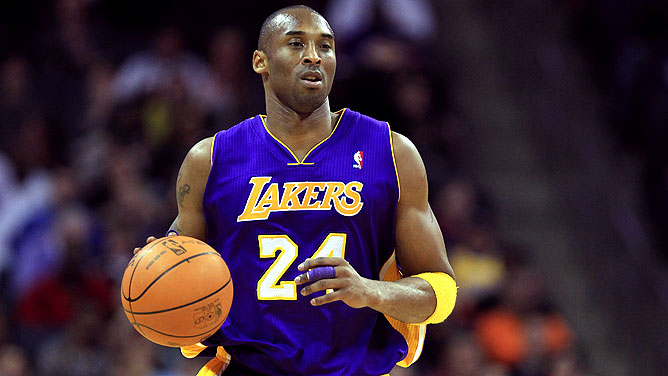 
• NBA.com's Scott Howard-Cooper begins a story on Kobe's never-ending chase of the NBA's greatest players with a great anecdote on Bryant at his sister's 1999 wedding. Howard-Cooper also talks to Bryant on the difference between personal and team-wide success:

"The official, predictable line from Bryant is that the individual glory is not a motivation compared to team success: 'Um, not really motivation. It's kind of cool how it all shakes out. I've been playing for a while and scoring a lot of points. So I just think it's pretty cool. But in terms of a motivational thing, it's the ring count that really gets me going.' "


• The Los Angeles Downtown News reports that Bryant drew a crowd to the Old Bank District in Downtown while filming a commercial for Smart Car. Bryant also participated in a newsconference later that day with Smart Car and Mercedes-Benz.


• CBSSports.com's Ken Berger presents a landmark piece on Allen Iverson, Kobe Bryant and the NBA draft class of 1996, with comments from Bryant on Iverson and Iverson on a host of topics. Included is the gem from Kobe in defense of Iverson's career and the generation of players who entered the league with the duo:

"When the new generation comes along, you still can't take away from those players," Bryant said. "[Iverson] did stuff that's never been seen before from a guy his size. You can't discount that. He took a team of one scorer and a bunch of hard-nosed players to the NBA Finals. And when he lost to us, he was doing it during our reign of having a great team."


• The Dallas Morning News' Eddie Sefko reports that Kobe is one of the best bets to win MVP honors at the All-Star Game, according to sports books. He shares top billing -- 13/2 odds -- with Miami's LeBron James. 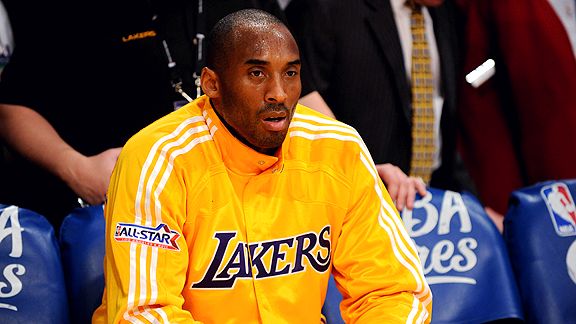 
• The Wall Street Journal picked up on reports from SB Nation and Basketball Reference earlier this week on Bryant's "black hole" status as a player who limitedly passes. But writer Carl Bialik smartly notes that just because Bryant passes infrequently doesn't mean he's not an apt passer. In fact, his assist totals have always been solid:

"And Bryant's passes stand out for leading to an unusually high number of easy baskets for his teammates," Bialik writes. "Bryant is averaging 2.2 assists per game that lead to baskets at the rim  layups, dunks and tip-ins. That's 6.5 assists at the rim per 100 minutes  tops among the shooting guards in the NBA who play the most (averaging at least 30 minutes over at least 30 games). And that's no fluke."


• UConn forward Alex Oriakhi told reporters that teammate Kemba Walker must have watched a lot of Kobe videos growing up in order to make the remarkable pass-to-himself tip-in shot he converted in the second half of the Huskies' game against No. 9 Georgetown.


• The Cleveland-area Chronicle Telegram reports on the interesting relationship between Cavaliers coach Byron Scott and Bryant. Scott was one of Bryant's first mentors in the league:

"I would sit down with Kobe a lot," Scott said Wednesday at Quicken Loans Arena before a game against the Lakers. "I did an interview  I think it was with NBA Entertainment  and said, 'That guy is going to be the best player in the NBA.' "He was different. He wasn't out trying to party. The guy was in the gym before everybody else and he stayed after everybody else."


• Kobe Bryant didn't make it to Jerry West's statue unveiling at Staples Center on Friday, but he did record a video message commemorating the former Laker great. Bryant also thanked West for everything he had done for his NBA career.