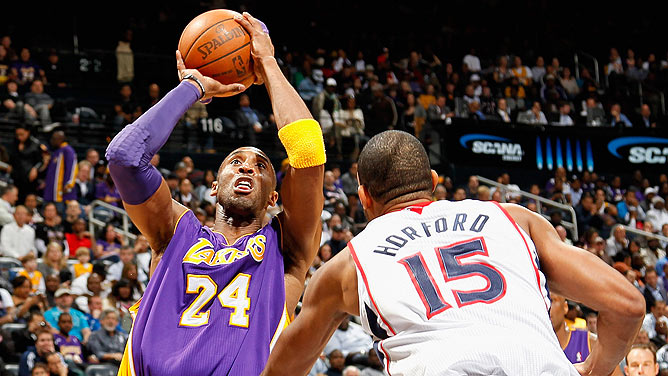 Attention Shaquille O'Neal: Kobe Bryant is coming for you.

Bryant scored three straight free throws with 2:05 remaining in the second quarter of the Los Angeles Lakers' 101-87 win against the Atlanta Hawks on Tuesday to give him 27,410 points for his career, moving him past Moses Malone for sixth place on the NBA's all-time scoring list.

"It feels good," Bryant said after finishing with 26 points on 8-of-18 shooting. "I'm just very fortunate, that's all." 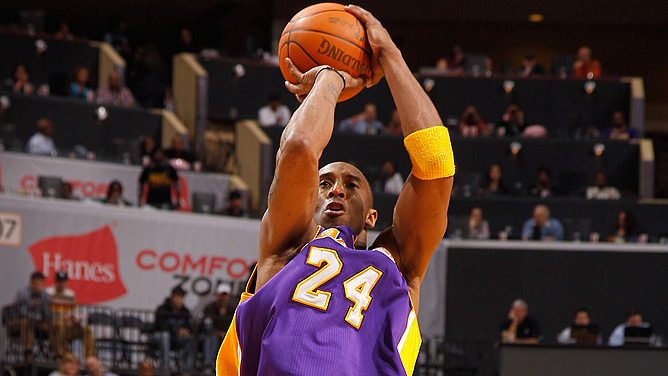 
• The Atlanta Journal-Constitution's Jeff Schultz reports that the Hawks have started selling opponents' gear on gamedays at Phillips Arena. Guess who had gear on display before Tuesday's Hawks-Lakers game? Yes, one Kobe Bryant -- who had all of his t-shirts sell out midway through the game, Schultz reported. He also asked Atlanta guard Jamal Crawford what he thought about it:

"In the arena? Are you serious? Unbelievable," Crawford said."


• Tennis star Novak Djokovic recently hung out with Kobe before the Indian Wells ATP event in Los Angeles, a Serbian news site passes along -- with a picture of the two athletes together. Djokovic is currently ranked third in the world behind Rafael Nadal and Roger Federer.


• Much was made about the Boston Celtics trading away center Kendrick Perkins at the deadline and giving up one of their biggest defensive advantages on the Lakers with that deal, but Boston may have acquired another defensive specialist in former Mavs swingman Sasha Pavlovic, the Boston Herald's Steve Bulpett reports. And Bulpett adds that Pavlovic might be just the player to stop Kobe if the Celtics end up facing the Lakers in the playoffs.


• The Sporting News' Marcus DeNitto reports that, with Orlando's Dwight Howard getting the NBA's first one-game suspension after 16-technicals penalty of the season, star players are called for technicals a lot more than non-stars are. He uses Kobe, who's approaching that 16-technical number, as an example:

"Guys like LeBron James and Kobe Bryant, the thinking goes, get to the free throw line more often than other players not only because they are more skilled and more aggressive, but also because referees tend to call fouls in their favor," DeNitto writes. "A quick look at the league leaders in technical fouls, however, shows that this notion does not hold true when it comes to refs dishing out technical fouls." 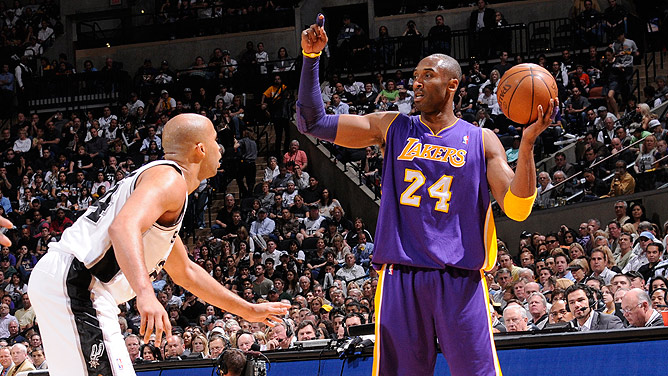 
• Speaking on 710-ESPN's Max and Marcellus show Monday, Kobe expressed his belief that every team has issues at this late juncture in the season -- and for that reason, in Bryant's mind, it's not a big deal that a couple Heat players were reportedly crying after they lost to the Chicago Bulls on Sunday:


• The Orange County Register's Janis Carr counts Kobe among sports' biggest crybabies, a slideshow inspired by Miami Heat coach Spoelstra's Sunday comments that some of his players were crying in the locker room following their loss to Chicago. Other inclusions on the list include Alex Rodriguez, Brett Favre and two Boston Celtics.


• NBA.com's Fran Blinebury opines that the Lakers are getting their groove back just at the right time. And it's not hard to imagine, he says, a scenario in which L.A. goes on to win its third straight title -- not with Kobe playing so well,not with the team's defense working so well, and not with Andrew Bynum fitting in perfectly with the squad. Blinebury asked Bryant about Bynum's influence:

"It makes a huge difference," Bryant told Blinebury. "He's extremely active defensively. He had just four points, but he was extremely dominant because he was all over the place. I'm not sure how many blocks he had, but he altered a great deal of shots. We funnel everything to our bigs, so the more active he is, the better we are. We've definitely made an adjustment in our system and I think it's paid off a great deal." 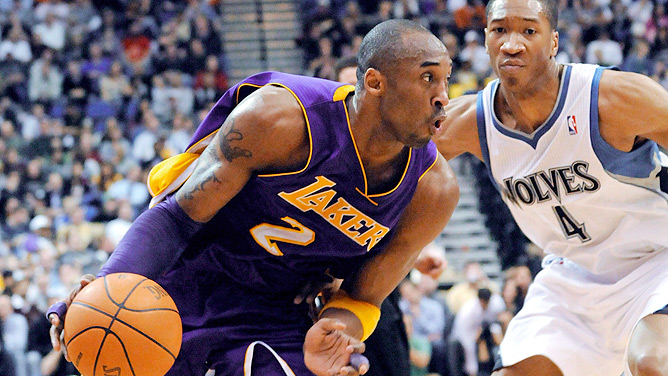 
• Zach Harper of ESPN.com's True Hoop Network digs a lot deeper into the topic of clutchness than what has been previously published, and produces a must-read piece about the nature of hitting shots late in games. His first example, of course, centers on Kobe Bryant and the never-ending debate about whether he is indeed clutch:

"Whether you agree with the assertion that Kobe is a clutch player or not, I think we can all agree that he often takes unnecessarily tough shots during these moments," Harper writes. "Maybe they're not tough for him. Maybe he's practiced these so many times that they're almost second nature to him."
• The Dallas Mavericks' future is brighter with newly acquired swingman Corey Brewer, ESPNDallas.com's Tim McMahon writes, because Brewer is a much more capable defender against guys like Kobe Bryant than any other player the Mavericks have on their current roster.


• Yahoo! Sports' Eric Freeman argues that Kobe's decision to do video advertisements for Turkish Airlines is not the smartest thing he has done, simply because it has already angered a significant portion of his and the Lakers' fanbase. Bryant should have thought about it a little more before signing the endorsement deal, Freeman says.

"Doing these ads will expose Kobe to new fans in a different part of the world, but he's also running the risk of alienating a sizable portion of his current fanbase," Freeman writes. "Are those new fans worth the risk of being remembered with misgivings by a large portion of his most loyal fans in Los Angeles? It's a tough question to answer, yet still one that Kobe should have considered in more depth before accepting this offer."


• The Los Angeles Times' Mark Medina goes back to the Lakers' last loss to the Bobcats on the road a couple of weeks ago as they prepare to face Charlotte again in Los Angeles on Friday. Bryant was so upset after that loss, Medina notes, that he refused to talk to reporters after the game. 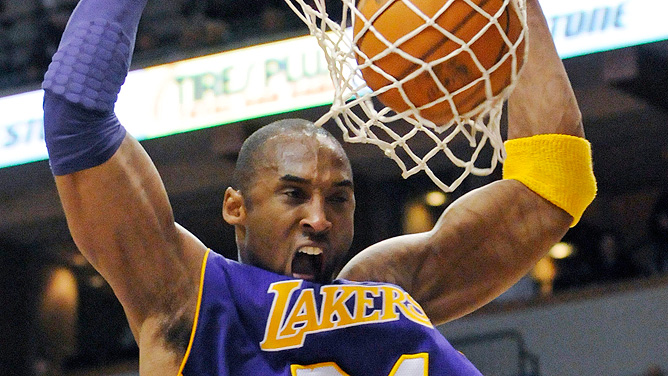 
• The Los Angeles Times' Mark Medina polls fans on the topic of the Sacramento Kings' possible move south to Anaheim and whether it could possibly affect their Lakers' allegiance. But first, he starts with an anecdote from Kobe on the topic:

"Kobe Bryant is not one to wax sentimental over his storied 15-year career, including his five NBA titles, four All-Star MVPs, two NBA Finals MVPs, one regular-season MVP and a current seventh-place standing on the league's all-time scoring list," Medina writes. "So he certainly wasn't going to be giddy for a preseason game last year against the Utah Jazz at the Honda Center in Anaheim, a homecoming of sorts for the Newport Beach resident."


• ESPNLA.com's Kamenetzky Brothers pass along a transcript of their interview with local soccer star Landon Donovan, including an exchange about Kobe and whether Donovan can see shades of soccer in Bryant's basketball game.


• The St. Paul Pioneer-Press' Ray Richardson talks to Minnesota's Wesley Johnson about his Bryant connection, and the former Syracuse star was ultra-complementary of his mentor of sorts. Johnson has been asked about Bryant a number of times now, but he always seems to throw out some new insight about their relationship:

"I can't put into words how much I appreciate the way he's looked out for me and shared things with me, but on the court, he still has that killer instinct," Johnson told Richardson. "That part of his game hasn't changed."