If a Final Four is taken away, did it ever exist?

The plan, as is the case every year, is to put it back up at FedExForum in the fall. 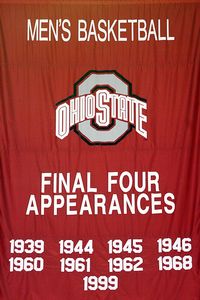 Memphis officials say the NCAA's ruling against the Tigers in 1985, in which then-Memphis State was accused of several NCAA violations, never forbade the school from hanging the Final Four banner it earned that season. But last week's ruling that required the Tigers to vacate their 2008 Final Four appearance and wins from that season is much more specific.

If the Tigers lose the appeal they vow to file, all references on stationery and signage relating to the event will have to be removed. The record books will have to be aligned to reflect that the Tigers' 38 wins, including five in the NCAA tournament, are no longer valid.

For the NCAA's part, it can't redo its cover for the 2009 Men's Final Four Records Book. That edition features former Memphis coach John Calipari and former Tigers players Derrick Rose -- who was found to be ineligible -- and Chris Douglas-Roberts among the nine photos. And you can visit the NCAA's site and buy for the low, low price of $24.99 a DVD of your favorite Memphis 2008 tournament game. You know, one of those that never happened.

Since the 1980s, in an effort to put more teeth into its enforcement, the NCAA has tried to enforce its signage ban for the guilty schools -- to varying degrees of effect. UMass officials say the Final Four banner and trophy recognizing its 1996 NCAA tournament team, coached by Calipari, are on display at the Mullens Center. UMass proudly hangs its Final Four banner and treats the event as if it happened -- and in reality it did, although not according to the NCAA, which forced the school to vacate its wins from that season. Two Big Ten schools that had Final Fours vacated have taken more drastic approaches to the rule. Michigan's 1992 and '93 Final Four banners were taken down at Crisler Arena and are now in storage at the school's Bentley Historical Library, according to Michigan officials. The records from the Fab Five teams have been removed from the Michigan record books, although the Michigan sports information staff continues to keep two record books -- one with the totals from those two seasons and one without. When Ohio State went to the 2006 Final Four, there was no mention of its 1999 Final Four appearance in any of the school's promotional literature. The 1999 Final Four banner hung in the main bowl of Value City Arena for the 1999-2000 season before it was moved to the Buckeyes' practice facility for the 2000-01 season. The banner was taken down after a graphics project incorporated the Buckeyes' overall success, rather than just banners. The banner was donated to a charity after the 2001 season.

According to Ohio State, all references to the 1999 Final Four team as well as the records from 1999 to 2002 -- the seasons for which the Buckeyes were penalized for using an ineligible player -- were removed from the school's media guides.

UCLA had an easy solution when it came to dealing with its vacated 1980 Final Four team: ignore it. Why? The Bruins hang only championship banners at Pauley Pavilion. UCLA officials say they have never been forced to change the record books.

What would have happened to the national title had Kansas' Mario Chalmers missed the game-tying 3-pointer that sent the game into overtime, and Memphis had won? The banner still wouldn't be in Lawrence.

According to the NCAA, if Memphis had won the game and the committee on infractions forced the school to vacate the title, there would have been no official champion for 2008. The records book would have listed Memphis' defeating Kansas with an asterisk noting that the Tigers' participation in the 2008 championship was later vacated by the COI. There would be no acknowledgment that Kansas had won the title. The precedent for this occurred in men's lacrosse in 1990, when Syracuse won the national title but later had to vacate it because it used an ineligible player. Syracuse says it has 11 national championships, but the NCAA recognizes only 10. The runner-up in 1990 -- Loyola of Maryland -- was not given the title. • Conference USA isn't making any statements on the decision to vacate Memphis' Final Four appearance until the Tigers' appeal is heard. This is a tough spot for C-USA commissioner Britton Banowsky. He is on the committee on infractions but had to recuse himself from the entire Memphis case. • More than 28,000 people responded to our poll within last week's Daily Word on who should lead the list for the 2010 national player of the year race. The top vote-getter was Kentucky junior forward Patrick Patterson, who certainly could make a run at the award. In second place was his new teammate, incoming freshman guard John Wall.

Michigan State junior guard Kalin Lucas was a close sixth. What does this tell us? That the race is wide-open, and Kentucky and Kansas fans might be the most passionate in voting for their respective players. It's unlikely that KU and UK would have four of the five All-Americans, but they do have four legitimate candidates. The possibility exists for the second straight season that the player of the year could be the top pick in the NBA draft (Wall).

• There was one glaring omission on the Wooden Award list and on my ballot. His name is James Anderson of Oklahoma State. Mike Noteware, Oklahoma State's sports information director, provided plenty of stats to back up criticism of Anderson's omission, which should be viewed as a poor oversight.

Anderson also was on the World University Games squad that won the bronze medal in Serbia. He outscored Brackins, Mississippi State's Jarvis Varnado, Ohio State's Evan Turner and Clemson's Trevor Booker. Oklahoma State coach Travis Ford expressed his dismay with Anderson's absence from the list. All points are valid, and going forward, Anderson will be included on the Wooden watch list.

• The combination of NBA voters' likely not being enamored with Rick Pitino's or John Calipari's time in the league, as well as the events of the past two weeks, likely means that neither will get into the Basketball Hall of Fame in Springfield, Mass. This is merely a prediction. Past entrants are hardly without a transgression, but the criteria might get tougher in the years to come for all these types of museums. The scrutiny placed on potential entrants is higher than it has ever been because the 24-hour news cycle constantly churns out information. • Before clearing Renardo Sidney to play at Mississippi State, the NCAA is asking for the financial records of his family in its attempt to prove how it was able to afford lodging in the Fairfax High district in Los Angeles. But does the NCAA do this in different cases? Did it ask for Reggie Rose's financial records to see how Derrick's older brother would pay for the flights and lodging on Memphis' trips? Just curious as to whether the NCAA is consistent in this manner.