Neither side budges in Sidney eligibility drama

The NCAA has requested specific documentation for the Mississippi State signee -- the income tax returns from Sidney's family to explain how it paid for housing while the Jackson, Miss., native was playing at Fairfax High in Los Angeles. But Sidney's Birmingham-based attorney, Donald Jackson, says he has provided plenty of information already and will not hand over that final piece.

The result is that no one at Mississippi State knows if the heralded 6-10, 260-pound forward will be able to play this season. Sidney can practice and has been with the Bulldogs, but whether he can play or not is mired in a standoff that seems like a smaller-scale health care debate. As is the case in Washington, neither side seems willing to budge.

Bracky Brett, MSU's director of compliance, said the NCAA Eligibility Center has determined that Sidney is not certified due to a nonresponse as it awaits the rest of the documents to be delivered by the Sidney family or its legal counsel. The Eligibility Center can either certify Sidney, not certify him or certify him with conditions, which could mean he would have to sit out games or a season, much like a foreign player who has amateurism issues.

Meanwhile, Jackson said he has contacted the Congressional Black Caucus, specifically representatives John Lewis, D-Ga., and Maxine Waters, D-Calif., over what he said is "a disturbing pattern in investigations against African-American student-athletes."

Jackson said he has follow-up meetings with the congressional members on the issue.

In an e-mail to ESPN.com, Jackson listed the specific items he has sent to the NCAA. The following list is in his words: 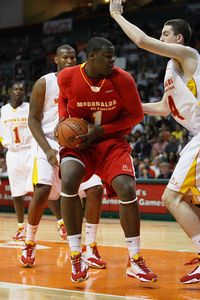 Doug Benc/Getty ImagesIf everyone is eligible, Renardo Sidney would be part of a loaded Mississippi State frontcourt.

4. Affidavits from "boarders" that resided with Sidney family.

5. Cancelled checks payable from family of "boarders" to Sidney family. These payments were to cover rent and living expenses for the "boarders."

6. Affidavits from grandparents and step-grandfather of Renardo Sidney, Sr. attesting to their financial support of Sidney family.

7. Voluntarily produced income tax returns for multiple years documenting his financial condition and ability to assist in supporting Sidney family. The grandfather is a retired autoworker that made a mid six figure income during his employment in the auto industry. The step-grandfather is a retired National Guardsman who has served three tours in Iraq. He is currently employed as a Deputy Sheriff.

10. Article of Incorporation and Minutes of Board meetings of L.A. Dream Team Foundation.

12. Lease agreements on all family residences and/or statements from landlords relative to amounts and methods of payment for monthly lease payments.

13. Bank statements from all accounts maintained by the L.A. Dream Team Foundation

15. Copies of hotel, travel and expense receipts from all unofficial visits taken by student athlete and family.

16. Documentation of income earned by Patricia Sidney from 2006 through the present.

17. Cellular phone records for over two years for all members of the family including siblings that are entirely unconnected to this investigation.

18. Several hundred pages of actual coursework completed by Renardo Sidney, Jr. as a high school student. The student athlete was threatened with "non-certification" if he failed to produce the actual coursework.

But according to the NCAA, Jackson hasn't answered the specific request.

"Mr. Jackson continues to try to purposely confuse the matter at hand," Stacey Osburn, the NCAA's associate director for public and media relations, said in an e-mail. "The real issue is his failure to provide the requested documentation to the NCAA Eligibility Center on behalf of his client."

Osburn added that the Eligibility Center determines what records are necessary to determine initial eligibility.

"There is case precedent for requests of specific information, and the Eligibility Center's requests for information from Mr. Jackson's client is consistent with the established, standard process and previous requests for other prospective student-athletes," Osburn said.

Jackson said he has been working cooperatively with Mississippi State's outside legal counsel, Michael Glazier.

"We both want to see him on the floor but our obligations are different," Jackson said.

Brett agreed, saying Mississippi State has to protect the integrity of the university. He said the documentation requests by the NCAA Eligibility Center go to the Sidney family and Jackson, not to Mississippi State.

"We hope to have some resolution before the season starts but it could carry into the season and beyond," Brett said. "If he doesn't compete then it's like a redshirt year, but his five-year eligibility clock starts once he enrolls."

Sidney has been participating in individual workouts with the team and can take part in practice when it starts officially on Oct. 16, even if he's not cleared to play. Teams can conduct full team workouts for two hours a week at this point in the preseason, but Mississippi State coach Rick Stansbury has been reluctant because of Sidney's situation.

"Does this keep you from doing some team stuff? Yes, because no one knows for sure if he's going to play," said Stansbury on Tuesday while he was on the road recruiting. "It does make it difficult that they are prolonging the decision."

Stansbury said he can't control this situation so he's not spending too much time on the minutiae of the case. But he does have to think about playing the season without Sidney. If he does play, the Bulldogs will be a stronger team up front as Sidney would provide a buffer for shot-blocking senior center Jarvis Varnado.

"You know the impact Renardo could have, but there is a learning curve," Stansbury said. "We will be tough to play against with him. He can overcome the learning curve with his abilities."

• Army will bring St. John's assistant coach Fred Quartlebaum on campus Wednesday in regard to the school's suddenly vacant head-coaching position. Quartlebaum was one of a half-dozen candidates interviewed for the position. Army athletic director Kevin Anderson also talked to Tulsa assistant David Cason, St. Mary's associate head coach Kyle Smith, Wake Forest director of basketball operations Walt Corbean, Arizona State assistant coach Dedrique Taylor and Cornell assistant coach Zach Spiker. Cason and Corbean are no longer part of the search. It's unclear how many of the other candidates will also visit the West Point campus. Anderson fired Jim Crews last week. Anderson said it was for multiple reasons, but there have been multiple reports that one of the issues was a confrontation with a player.

• Illinois State junior forward Bobby Hill suffered a torn ACL for the second straight season. Last year it was in his right knee and this time in his left. Hill was a JC All-American when he transferred to Illinois State and was expected to be a key contributor for coach Tim Jankovich. In a statement, Jankovich called Hill's injury "the toughest news I can remember ever receiving. It is difficult for me to put in words how devastated I am for him."