Reinforcements on the way for Seton Hall

12/14/09
6:54
PM ET
Seton Hall better not take a cue from UTEP or Boston College when adding a key player to the mix midstream. The transition can be bumpy.
[+] Enlarge 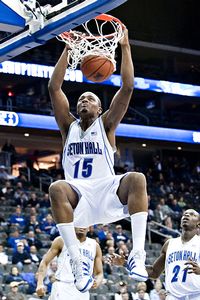 Duncan Williams/Icon SMIHerb Pope is averaging a double-double for an 8-0 Seton Hall team this season. But the going only gets tougher for the Pirates.

UTEP added Derrick Caracter to its lineup Sunday for the first time this season. Caracter scored two points in 12 minutes and the Miners lost 87-80 to New Mexico State at home after beating the Aggies by 21, 12 days earlier in Las Cruces, N.M.