05/03/10
9:22
AM ET
Dan Guerrero wants to see options when the NCAA tournament selection committee convenes in Indianapolis in two weeks.

So the UCLA athletic director and committee chairman instructed NCAA vice president Greg Shaheen to come up with several models so the committee can discuss and raise the issues and concerns related to each one.

Guerrero, who will hand over chairmanship of the powerful committee to Ohio State athletic director Gene Smith in the fall, will oversee the change in the NCAA tournament from 65 to 68 teams. The committee will be the only governing body that makes the decision about what to do with the expanded tournament, and a final decision will be made when it meets again in Chicago the last week of June. 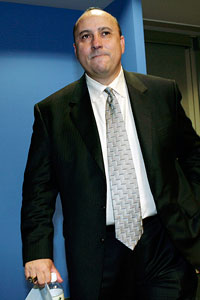 AP Photo/Ric FrancisChairman Dan Guerrero and the NCAA tournament selection committee are looking to find a format compromise by July.

Shaheen's plan is to make the rounds of the power-six conference meetings this month to get feedback on a few proposals.

But let's face it: There are essentially only two real choices.

The first scenario is to add three more games to the existing opening-round model. That would mean taking the bottom eight automatic qualifiers and having them play for the four No. 16 seeds. The games would either remain in Dayton or be at the site where the 16-seed would play the No. 1 later in the week.

This model would cause the least disruption in the bracket and would essentially create on Selection Sunday an either/or matchup in each region.

"That's the obvious one, to seed the teams in a true manner from 1 to 17 and call it a day,'' Guerrero said.

But that scenario likely will get push-back from the lower-level conferences, and they will be heard from over the next month.

One argument says CBS/Turner didn't pay $10.8 billion for Tuesday opening-round games featuring lower-profile teams that won't elicit a high rating -- but that argument doesn't wash. According to a high-ranking network source, CBS/Turner didn't get the tournament for the Tuesday opening-round rating. The goal is for a high aggregate rating for the overall tournament, not just one day.

Having the seed lines from 1 to 17 and then just playing 17 versus 16 in each of the four regions would be the truest form and wouldn't disrupt the seeding process. It would also allow for four more at-large teams to be put in the field from a cross-section of leagues, but more than likely from the power-six conferences.

"We've always believed in the true seed,'' said SEC commissioner Mike Slive, a former chair of the committee. Like the other commissioners, Slive will be briefed by Shaheen later this month.

"I want to have time to analyze several scenarios,'' Slive said. "One of the things that the committee has not done, except for the bracketing principles, is not to be true to the seeding.''

The second major scenario that Shaheen will broach with Slive and his colleagues is to take the last eight teams in the at-large field and square them off against each other in four opening-round games.

But here's where it gets a bit tricky. The last eight at-large schools are not all equal. Shaheen said you would have, for example, two teams possibly playing for a 12-seed in the West, maybe two other teams playing for an 11 in the South, perhaps two teams going for a 10 in the Midwest, and two teams vying for a 12 in the East.

The Selection Sunday bracket would have, just like the opening-round game in previous years, alternates on those seed lines. So a 5-seed might have the winner of, say, Mississippi State versus Virginia Tech as its 12th-seeded opponent. Shaheen said the prep work for the No. 5 seed would be to prepare for either team, and after the Tuesday or Wednesday opening-round game, the 5-seed would have two days to prepare for the winner in a first-round game.

O'Neil: What about the first four games?

The NCAA announced it would be expanding the men's basketball tournament to 68 teams, not 96. Bravo. Now keep the goodwill train going and make the four opening-round games a play-in between at-large teams. Story
•  Gasaway: Have eight lowest play

•  Blog: What will most likely occur
•  Shaheen explains 68-team logistics

•  Katz: How field should be formatted

•  O'Neil: What the coaches are saying
•  Forde: NCAA proves itself savvy
•  Brennan: What we know/don't know
•  Lunardi: Missed out on expansion
•  Leung: Initial player reaction positive

"We're going to toss out ideas, collect them from the membership at spring meetings and review them during a meeting in Indy,'' Beebe said. "We need to go in with an open mind and consider all the possibilities.''

Guerrero said the committee will listen to the membership as to what makes the most sense.

As for the contention that a team playing in the opening-round game may not feel like a true member of the tournament, Shaheen shot that one down with a financial argument.

"The team's conference that wins that [opening-round] game receives an extra unit and that's a big piece,'' Shaheen said. "This past year, the unit value was $225,000 paid out for six years, so that's worth $1.2 to $1.3 million if you win one of those four [opening-round] games.''

Shaheen said floating the seeds wouldn't work in the second scenario. He said teams should know on Sunday who the opponent is for the first game, or at least the two possibilities for the opponent.

Shaheen laughed off the question of whether people filling out the bracket would be able to handle having an either/or in four games involving at-large teams.

"Somehow since 2001 [the first year of the opening-round game], people have been able to complete brackets,'' he said.

Meanwhile, Shaheen said the conspirators who are prone to think 68 is a one-year deal are wrong.

"There was this talk that it was a one-year stopping point and then move to 96,'' Shaheen said of the rumors. "There is no apparent interest for the basketball committee to further look at [expansion of the field] at this point in time. That's the honest scoop."

One reason why the NCAA appears to be holding firm on 68 is Shaheen's intention of redoing an NIT deal with ESPN that expires this year. The length of the deal is still to be determined, but Shaheen said "it will definitely happen.''

He added that the NCAA will continue to own the NIT and expects the 32-team postseason event will live on, with its final four still meeting up in New York City.