06/08/10
8:12
PM ET
The NBA draft's early-entry withdrawal deadline is June 14, which gives Mississippi State guard Dee Bost one week to ensure his name won't be on the league's official early-entry list before the draft.

Bost already missed one cutoff date, the NCAA's new May 8 deadline to withdraw from the draft and return to school. 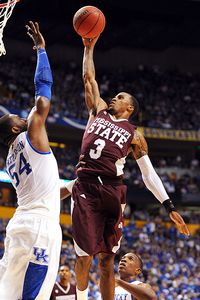 Don McPeak/US PresswireBost has enrolled in summer classes at Mississippi State. But will he ever again compete for MSU?

Bost wasn't going to be selected in the first round and was likely a reach for the second even after averaging 13 points and 5.2 assists a game as the lone point guard for the Bulldogs, who played in the NIT this past season.

Yet Bost is a victim of poor advice and not having his ears fully tuned to the Bulldogs, according to multiple sources within the Mississippi State program.

Bost is attending summer school and wants to come back for his junior season, so he's launching an appeal with the NCAA's reinstatement committee on the grounds that he didn't know the new rule. His case is that he assumed -- wrongly -- that the former rule (that a player could go through the draft process and return to college if he didn't sign with an agent) still existed.

But the NCAA scrapped its former deadline in a pretty public manner, and the NBA did acknowledge it May 11 with a list of players who withdrew from the draft and others who remained in consideration. Somehow, Bost's teammate and classmate Ravern Johnson got the message and withdrew in time for the May 8 deadline.

Bost's defense -- and Mississippi State is supporting his appeal but isn't overly confident -- is that he didn't know the rule and made his decision within 12 hours after the deadline passed. But according to sources, MSU wasn't told before May 8 that Bost was thinking about pulling his name out of the draft.

Look, the rule is absurd. No one can get a true read on whether he should stay or go based on one week with limited to zero workouts. The NCAA and NBA should say together that the players must decide whether they're in or out of the draft, or they should give the players all of May to decide and let them work out. There's probably more movement toward the former, which is fine. You should know whether you're NBA-worthy or not by the end of the season. Scouts have had enough time to analyze.

• If Bost can't play next season, the Bulldogs will have plenty of options at the point with Twany Beckham, junior college transfer Brian Bryant and shooting guard Jalen Steele.

The returns of Johnson and forward Kodi Augustus as well as the additions of redshirt freshman Shaunessy Smith and (finally) Renardo Sidney up front should give the Bulldogs more than enough to compete in the SEC West.

• Mississippi State might have one of the more bizarre road trips of the 2010-11 season. The Bulldogs will face Virginia Tech in the Bahamas in December (Georgia Tech versus Richmond is the other game at the Atlantis hotel), then fly to Honolulu for the Diamond Head Classic, which features a loaded field that includes Butler and Baylor. The Bulldogs are trying to add a game with BYU on New Year's Day in Las Vegas on the way back from that trip.

1. The Pac-10 is selling a promise of a network deal to the Big 12 schools, but Texas and Oklahoma can stay put and get a lucrative network deal of their own in their preferred comfort zone rather than change leagues.
2. Nebraska is the one school everyone should worry about in the Big 12. No one will care if Missouri leaves.
3. Even if the Huskers bolt, and even if Mizzou goes as well, the Big 12 can more than survive as a 10- or 12-team league and command more television revenue than a number of conferences, possibly the ACC or the Big East. The Big 12's value as a 10-team league (or a 12-teamer with two additions) wouldn't drop as much as is being speculated.
4. The Mountain West can look at adding teams all it wants, but Colorado would join the MWC -- the conference of Colorado State and Wyoming -- only if it had no other options.
5. The 16-team model isn't ideal. Sure, it's somehow working for basketball, but in football it failed in the WAC in the late '90s because not everyone was pulling for it to be successful. Forget about everyone talking about the great matchups. It would take an eight-year cycle to get everyone to play. That means Washington State, for example, would play Texas twice in an eight-year cycle.
6. The two-time-zone deal is a real issue for Pac-10 and Big 12 schools. It's also a problem for networks, as teams might be playing conference games at 10 p.m. Central time when on the West Coast or 5 p.m. on the West Coast when the teams are in the Central time zone.