If, in this year's field, Virginia Tech had been pitted against Minnesota on an 11-seed line -- with the winner getting Xavier in the round of 64 -- Hokies coach Seth Greenberg would not have complained.

Nope, not one peep out of him.

That's what he said Monday upon hearing the news that the final four at-large teams would have to play in a first-round game to play into the main bracket under a new 68-team bracket unveiled by the tournament selection committee. 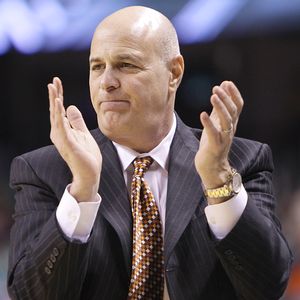 However, that that doesn't mean he agrees with the decision.

"Common sense says you would keep the integrity of the bracket," Greenberg said.

Virginia Tech has been close to making the field of 65 in each of the last three seasons. In March, the Hokies were 23-8 with 10 ACC wins after a conference tournament loss to Miami. They didn't make the field.

The previous year, Tech had 18 wins after the ACC tournament, losing to eventual champ North Carolina by three. The Hokies didn't make the field. In 2008, they won 19 games before Selection Sunday, losing to North Carolina at the buzzer in the ACC tournament, prompting Greenberg to say in a postgame news conference, "Anyone who watched that game that knows anything about basketball, if you don't think this team is one of the top 65 teams in the country, you're certifiably insane." Virginia Tech didn't make the field.

So after those three near-misses, Greenberg said he now refuses to define his team's season by making the NCAAs.

"The body of work defines our season," he said by phone while recruiting in South Carolina. "Most of the teams that are in the field are out by the first weekend. I want my team to focus on the body of work, not getting in or out. There is a stigma of not making it, so I know there is much greater satisfaction for making it."

Greenberg did question why the men's tournament is the only NCAA championship where there now won't be a true seed line to enter the main bracket. He said common sense should have prevailed and that the last eight teams in the tournament -- even if they were automatic qualifiers -- should have been in the first-round games.

"That's the integrity of the bracket," Greenberg said. "I know they are trying to appease both camps. But why wouldn't you just seed 1 to 68 and have the last eight teams play? I don't study it. But what other NCAA championship do they take into consideration the opening round because of television or revenue?"

The NCAA will put the first four games on TruTv next March to debut the combined the 14-year, $10.8 billion television agreement with CBS/Turner. NCAA vice president Greg Shaheen said TruTv was chosen to help enhance that television partner.

"Let's be honest, they're basically saying they want teams on the bubble to have all that hype leading up to start the tournament to draw bigger numbers," Greenberg said. "There are a lot of constituents that had to be addressed."