Big East off to a fast start

The Big East was supposed to take a back seat to the Big Ten in the conference rankings.

So far no other conference is close to the Big East -- at least in winning early season tournaments.

The Big East has won six traditional tournaments (those with at least semifinals and finals played on a neutral court):

On the flip side, DePaul had an 0-3 showing in the 76 Classic in Anaheim and Seton Hall won only one game in the Paradise Jam in St. Thomas. Marquette failed to reach the title game at the CBE Classic in Kansas City, losing in the semifinals to No. 1 Duke.

But those last three are hardly blemishes for the league. The six wins and the two title losses speak much louder to its overall strength. 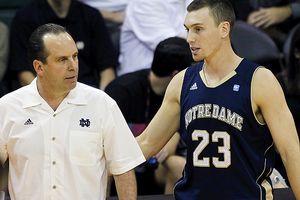 Cliff Welch/Icon SMINotre Dame coach Mike Brey is pleased with his team's 7-0 start, which includes a win at the Old Spice Classic.

"Every year the media wants to come up with another best league, some other conference," said Pitt coach Jamie Dixon. "Yet, we've done this year after year. We're easy to dismiss. But then we'll beat each other up in January and February and our RPI won't be as high so we won't get as many higher seeds."

The wins by Pitt, Georgetown, Syracuse and St. John's, based on the overall fields in each tournament, shouldn't have been a shock.

The Irish were picked seventh in the Big East by the coaches in the preseason; UConn was picked 10th.

Notre Dame had to knock off a possible SEC darling in Georgia (playing without a healthy Trey Thompkins at the start of the event), then an offensively challenged Cal before disposing of the always pesky Wisconsin. UConn, though, had the more formidable task of beating Missouri Valley favorite Wichita State, then Big Ten favorite Michigan State and the uber-talented Kentucky.

"We're going to get eight bids [to the NCAA tournament] again," said Notre Dame coach Mike Brey. "That's what it looks like based on these early returns."

Connecticut has a national player of the year candidate in Kemba Walker. The Huskies also have some time to avoid a hangover from their Maui win with a soft five-game schedule (save a game against a surging Harvard, which just beat Colorado) prior to their Big East opener at Pitt on Dec. 27. The Huskies' next major nonconference games aren't until January (at Texas on Jan. 8 and home against Tennessee on Jan. 22).

Meanwhile, Notre Dame's week includes a matchup with Valley upstart Indiana State on Tuesday before going to Kentucky on Dec. 8 and then hosting Gonzaga on Dec. 11.

"It's a Big East week," Brey said. "That's why we set it up. There's nothing like having this experience."

Brey said the experience of having Tim Abromaitis, Ben Hansbrough, Tyrone Nash, Carleton Scott and even Purdue transfer Scott Martin play three games in four days in Orlando paid off. Brey also got much-needed scoring out of freshman guard Eric Atkins in Orlando, who scored 12 points in the title win over Wisconsin on Sunday night.

"We need Atkins and Martin to emerge for us to be really good," Brey said. "Ultimately, those two guys played well and found a rhythm. I really love this team. I've got a good vibe about them now. I'm so impressed with their focus and concentration. They all chased a common goal."

And that was to win a tournament championship. Ultimately by doing that, just like Georgetown, UConn, Pitt, Syracuse and St. John's did, the Irish proved that the Big East will have the depth to be an even tougher conference with enough good teams to possibly land 50 percent of its membership in the NCAAs in March.