Wisconsin coach Bo Ryan sat down with Bob Cousy recently to discuss the definition of a true point guard. 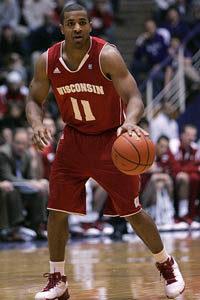 Ryan said Cousy laid out the essential qualities of the position: a player who sees the floor and makes his team better.

"Jordan Taylor is exactly what Cousy was talking about," Ryan said.

So, too, is Xavier's Tu Holloway. Yet, somehow neither Taylor nor Holloway made the list of 10 finalists for the award released Monday.

The finalists include some obvious choices like BYU's Jimmer Fredette, Connecticut's Kemba Walker, Kentucky's Brandon Knight, Villanova's Corey Fisher, Washington's Isaiah Thomas and even Duke's Nolan Smith, who is more of a shooting guard than point, but still can be on this list since Kyrie Irving has been sidelined with a toe injury. San Diego State's D.J. Gay merits inclusion on the list, too, with the Aztecs sitting with one loss so far this season.

Saint Mary's Mickey McConnell is a bit of a push since you could make the argument that Matthew Dellavedova handles the ball as well and has dished it out as much as McConnell (5.7 assists per game to McConnell's 6.3).

But Illinois' Demetri McCamey over Taylor? Illinois is 5-5 in the Big Ten, 15-8 overall, and McCamey is the epitome of inconsistency. His production in Illini losses (five assists and four turnovers in a loss at home to Ohio State; five turnovers and three assists in a three-point loss at Indiana) stands in stark contrast to his more impressive games (21 points, seven assists and two turnovers in a win over Wisconsin).

Taylor leads the nation in assist-to-turnover ratio at 3.88 (101 assists and 26 turnovers). He's turned the ball over only 43 times in 46 career Big Ten games. He's second in scoring in Big Ten play at 20.7 points a game and is averaging 35.5 minutes a game. And he is a tremendous defender, taking on McCamey, Michigan State's Kalin Lucas and Michigan's Darius Morris in key assignments.

But most importantly, Wisconsin is 7-3 in the Big Ten, 17-5 overall and ranked No. 14. No offense to Josh Gasser but it's not as if Taylor has an all-league player next to him on the perimeter. And Taylor has made life a lot easier for Jon Leuer and Keaton Nankivil. 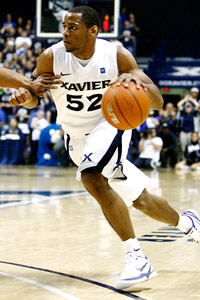 Icon SMIXavier's Holloway is a shoo-in for A-10 Player of the Year.

"He doesn't turn it over, he makes the extra pass and it's like a hockey assist, he makes the pass to the pass that gets the assist," Ryan said. "He's always thinking about one play ahead. I think Cousy was the same kind of guy, making that pass. He could always see the next pass, two passes ahead. And when teammates relish the time on the floor with somebody, I know the impact he's had on our team."

Taylor should be a first-team All-Big Ten selection. McCamey should not.

And Cleveland State's Norris Cole over Holloway? Cole is having an exceptional season with 20.3 points, 5.6 rebounds and 5.3 assists a game. But the Vikings are 21-5 overall, without a signature nonconference win, and tied for second place in the Horizon (10-4) behind Valparaiso.

Holloway leads the A-10 in scoring (20.8) and free throw percentage (86.6) and is second in assists (5.0). He plays 38.4 minutes a game and is handling a depleted roster. He has scored 20 or more points in 14 games and can drive to the hoop as well as pull up. Saint Louis went box-and-one on Holloway and he got 12 first-half points for Kenny Frease. He then adjusted to score 20 of his 24 points in the second half. He's one of four Division I players averaging 20 points and five assists.

Hofstra's Charles Jenkins isn't on the list for some reason, either, with his 23.2 points and 5.1 assists for the 9-4, 15-9 Pride. But Holloway has the Musketeers at 8-1 and tied with Duquesne atop the A-10 and 16-6 overall heading into Tuesday's game at Georgia.

"His numbers are better than half of the players listed," Xavier coach Chris Mack said. "Not sure of the exact criteria but it can't be based on his production."

Not sure, either, but Taylor, Holloway and of course Jenkins should have been listed as Cousy finalists.