06/03/11
7:29
PM ET
Rick Stansbury was the only SEC coach who didn't want to scrap the two divisional format for fear that rivalries and fan interest would fade late into the season.

Mississippi State has been in the thick of the SEC West race on an annual basis under Stansbury. The Bulldogs have won at least a share of the West title four of the past five seasons. But only twice did that result in an NCAA tournament berth. One of those times occurred when Mississippi State won the SEC tournament.

Stansbury grasps that winning the West guarantees nothing. But he still didn't want to see the league dismiss the tradition of the two-division setup. 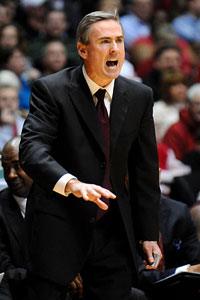 Kelly Lambert/US PresswireRick Stansbury wanted to keep the divisional format in the SEC for the fans.

But he was a lone voice. The coaches voted 11-1 to endorse a proposal to move to one 12-team league for the 2011-12 season at their spring meetings in Destin, Fla., on Tuesday. Later that day, the athletic directors endorsed the proposal. The schedule won't change next season but it will change in 2012-13 when teams in the West won't necessarily play twice in a season. Mississippi State may end up playing Kentucky twice and LSU once in a new 16 or 18-game format.

"There's no question that down the stretch of the season there is a lot of excitement about the [division] races," Stansbury said. "We've been told by the [NCAA tournament men's basketball] committee that they break teams down individually. So it doesn't matter [if there is one league or two divisions]. I just think this is bad for the fans. Championships create excitement."

Stansbury said he endorsed changing the SEC tournament format to reward the top teams regardless of divisional record with the four byes. Now, it won't matter as the top four teams in the 1-12 league will receive the byes instead of a second-place SEC West team getting a bye over a third-place SEC East team with a better record.

"I understand it and I don't have a problem with it now but I do think it will take away some of the fans excitement," Stansbury said. "I think there is a big argument for that."

Stansbury said he doesn't buy the point that the West is the only side that had issues getting teams in the NCAA tournament, citing that three years ago South Carolina tied for the East title and didn't receive a bid. The Gamecocks tied with Tennessee in 2009 with a 10-6 record, but were the second seed in the East and didn't receive a bid to the NCAAs.

"It's not all about the East," Stansbury said. "Our league has gone in cycles. We've held our own for sure."

The Bulldogs certainly have been in the thick of the race and most recently with plenty of drama, too.

Stansbury is coming off easily his most frustrating/rewarding/bizarre season as head coach in Starkville. A year ago, he was hoping the NCAA would reinstate point guard Dee Bost after he was the only player who didn't know that the draft date had changed to May 8 and that a player couldn't return to school if he wasn't selected. Bost had to sit the first nine games. But he was also ineligible for the fall semester, which meant a total of 14 games.

Renardo Sidney, who was already a year behind after having to sit his first season in school while amateurism issues were sorted out, was suspended for the first nine games of the season, too.

Then came Sidney's one-game suspension for practice misconduct followed by the haymakers he exchanged with teammate Elgin Bailey in the stands at the Diamond Head Classic in Honolulu that cost him two more games. Sidney was sent home. So, too, was Bailey. Sidney, though, was reinstated. Bailey transferred.

All of this occurred during one of the most insane schedules ever with five games in five days and then a trek from Jackson, Miss., to Nassau, Bahamas, to Las Vegas to Honolulu to Las Vegas and home again. Mississippi State lost four of the five games on the trip. The five games in five days prior to the trip was done to jam as many games as possible into the first semester to help eat up Bost's and Sidney's suspension time.

"Playing that five-game schedule and half the season without Dee and Renardo is what made it a challenge and put us behind," Stansbury said.

Does this mean Stansbury -- the lone critic at the SEC meetings -- has nothing to complain about with his team? Possibly. Sidney is working out with John Lucas in Houston and Stansbury said so far all is well. Bost is back for his senior season.

The SEC top order will likely be Kentucky, Vanderbilt, Alabama, Florida and then Mississippi State.

The Bulldogs will practice for 10 days in July in advance of a European excursion to Belgium, France and the Netherlands. That should help jump start the season for the Bulldogs.

Stansbury doesn't mind beating to his own drum within the SEC. He has dealt with plenty of distractions during his 13 years at MSU, mostly from players leaving early for the NBA draft.

He didn't want change in the SEC. He liked the reliable structure every season. But he was in the minority with no support. Now he'll just deal. And he'll try to make a move up the standings again, even if there are no divisions to champion.