06/13/11
6:43
PM ET
Let's face it: Terrence Jones doesn't mind putting himself in the spotlight from time to time -- from the very public recruiting spectacle between Washington and Kentucky to the much-anticipated tweet announcing his decision to return to UK for his sophomore season.

Jones was humbled in between those two self-promoted highlights, though. He wanted to be the No. 1 pick in the NBA draft, or at least in the top five.

But during Kentucky's draft combine in early May, Jones was told he was more likely in the back of the lottery, not the front. He said Milwaukee, Houston, Cleveland, New York and Oklahoma City all told him that he wasn't going to be picked as high as he wanted in the draft.

His classmate and teammate Brandon Knight was the go-to guy who made the shots to beat Princeton and Ohio State in the NCAA tournament. Knight is the one who will likely go in the top five in next week's draft. Even Jones' one-time practice teammate at Kentucky, Enes Kanter, is a likely top-six selection in the draft.

Jones was told where he would be picked. He wasn't satisfied. It wasn't his dream to be 8 through 14, nor was it his goal to be remembered as a nice complementary piece on the Wildcats, where even senior big man Josh Harrellson seemed to receive more late-season publicity during UK's run to the Final Four. 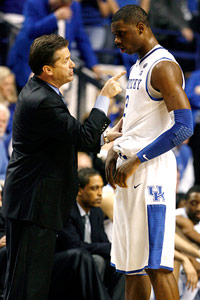 Mark Zerof/US PresswireTerrence Jones will experience at least one more year of tutelage under John Calipari.

"I wanted to have a bigger impact on the college level," Jones said. "I want to be one of the best college players."

The 6-foot-8 forward from Portland, Ore., was one of four lottery-bound freshmen who decided to return instead of leave for the NBA draft. But in the eyes of NBA scouts, Jones starts his sophomore season fourth in that group, behind North Carolina's Harrison Barnes, Ohio State's Jared Sullinger and Baylor's Perry Jones III.

"He's got to do what Derrick Williams did at Arizona -- become a leading rebounder and play harder," said Kentucky coach John Calipari, who is working on a contract extension with Kentucky that will likely add two more years to the six remaining on his contract. According to at least one source, the money may not increase too much -- if at all -- especially in light of the situation at the university during these tough economic times for higher education.

As for Jones, we all remember when Calipari very publicly got on him during the Wildcats' loss at Alabama in January, using an expletive and the word "selfish" in the same sentence. He also didn't start Jones against Auburn the previous week.

But Jones said there were no issues with his head coach and that the yelling wasn't a big deal. "It just comes with playing in a great program that has a lot of history behind it," Jones said. "So many people care about this program. He was just not liking the play at the moment. I fixed it. He did what any coach would do. I just had to listen."

Calipari said Jones had never been seriously challenged the way he pushed him during his freshman season.

"I told him that unless you don't want to be challenged to be the best player in the country, then don't come back," Calipari said. "I told him that Brandon Knight was the first player at practice and the last to leave. You've got to have that work ethic."

Lamb has a chance to be a consistent scorer, but the onus will be on Jones to be more of a leader, maybe even more so than returning wing Darius Miller or Lamb. Jones averaged 15.7 points and 8.8 rebounds a game last season. Certainly nothing to be ashamed of.

But this time around, he'll also need to shepherd in a recruiting class that is being billed as one of the sport's best of the past decade. Three of the Wildcats' four McDonald's All-Americans (point guard Marquis Teague and forwards Anthony Davis and Michael Gilchrist) may end up starting, with the fourth (wing Kyle Wiltjer) playing an important role off the bench.

"All of these players were stars in high school and they've got to come together," Jones said. "We've got to get after it defensively."

Calipari is already touting the defensive potential of this team with its length at nearly every position. To be an elite defensive team and compete with teams like North Carolina and Ohio State for national title, the Wildcats must defend.

Expectations, always high anyway in Big Blue Country, will be extremely amped up this season. Kentucky made it to Houston last season as a 4-seed. In 2012, no one will be satisfied with a regular season that results in a 4-seed.

"The target will be on our back," Jones said. "It won't be the same situation. We'll be the one with the target."

Jones said he wants the players to lean on him. He said he needs to become an all-around player -- a better rebounder, a better defender and a better leader. Jones will attend the Kevin Durant camp in Chicago later this month, but took a pass on USA Basketball. He wants to stay in Lexington to ensure there is cohesion with the freshmen and the returnees.

"I'm enjoying the experience," Jones said. "I want to gain maturity. I want to learn how to be a better leader. I want to try and win a national championship with the new guys coming in."