Mangano, Johnson get a world stage

08/04/11
10:50
PM ET
The final two cuts were made in Colorado Springs for the World University Games team, and the unlucky pair was Connecticut's Shabazz Napier and West Virginia transfer Aaric Murray. Among those cut earlier in the week were Yancy Gates (Cincinnati), John Shurna (Northwestern) and Khris Middleton (Texas A&M).

Trust me, though, you will see plenty of Gates, Shurna and Middleton this season. All will star for their teams in high-profile games.

You can't necessarily say the same for Yale's Greg Mangano and UC-Santa Barbara's Orlando Johnson. Yet both of these players are among the 12 who will wear the Team USA jersey in China at the WUG. Since 1965, the Americans are 131-8 in the event, but are looking to bounce back from a surprising second-place finish in 2009. 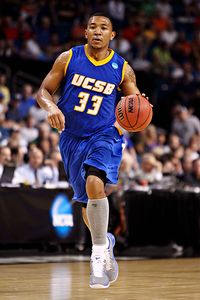 Derick E. Hingle/US PresswireOrlando Johnson flirted with the NBA, but decided to return to Santa Barbara.

Having Mangano and Johnson on this squad speaks volumes about their development on the national scale. Last season, the 6-foot-10 Mangano averaged a double-double (16.3 ppg, 10 rpg) for the Bulldogs, while Johnson led the Gauchos with 21.2 ppg and 6.2 rpg for the Gauchos.

"It's an honor and it validates OJ and his determination and dedication,'' UCSB coach Bob Williams said of his 6-5 wing making the cut. "He's the first Gaucho since Brian Shaw to be honored on the national stage. It will only heighten the attention that he will receive in and out of games this year.''

Johnson and Mangano both declared for the NBA draft in the spring, but withdrew shortly thereafter as it was apparent neither was gaining traction for a possible selection.

"Greg is a really good talent and he's got a European game to him,'' said Yale coach James Jones, who went to the Springs to watch one of the workouts. "He was second on our team in 3-pointers made, led the combine in rebounding out there. He's a local player who wanted to come to Yale.''

Jones said players like Mangano and Johnson making the WUG team shows there's talent at all levels of Division I. (Detroit's Ray McCallum Jr. also made the squad, but he was a high-major talent coming out of high school.)

"There are really good players,'' Jones said. "Greg was ninth in the nation in blocked shots and 18th in rebounding. I know a lot of those were against Ivy League competition, but we also played Illinois and Stanford. He's been able to play at a high level and he's got the potential to be a future pro if he continues to step up his game to another level.''

A few more quick hitters on this Thursday afternoon:

• Florida released its nonconference schedule, which presents plenty of challenges for the Gators. This may actually be one of Billy Donovan's toughest nonconference schedules, especially for a coach that doesn't like to leave home much. The Gators go to Big Ten favorite Ohio State on Nov. 15, play perennial Horizon League troublemaker Wright State in Tampa, go to Big East favorite Syracuse on Dec. 2, host one of the Pac-12 favorites in Arizona on Dec. 7, play Big 12 favorite Texas A&M on Dec. 17 and play likely top-three ACC team Florida State on Dec. 22 before facing a pesky Big East team in Rutgers on Dec. 29. A pesky Yale team arrives on Dec. 31 and the nonconference slate ends with always-tough UAB on Jan. 3. That's a heck of a way to test your team in the first month and a half of the season.

• The Big 12 released its first-ever round-robin, 18-game conference schedule. There are a number of games to circle. The two Baylor-Texas A&M games should be two of the best but come earlier in the schedule -- Jan. 2 in Waco and Feb. 1 in College Station. These two teams could be predicted 1-2 in the preseason poll with Missouri, Kansas and Texas right on their heels. But of course these two in-state teams played in years past under the old format. In the new 10-team league, everyone will play each other twice.

• Minnesota also released in nonconference slate. The Golden Gophers want to be considered an NCAA tournament team again, but they better win a watered-down Old Spice Classic in Orlando and then take out Virginia Tech and USC at home. Minnesota will need to enter the Big Ten with a strong nonconference record and a few significant wins, and hope those teams do well in their respective conferences.

• Missouri is selling premier courtside seats at $500 a pop for the Oct. 30 Mizzou-Missouri Southern exhibition game in Joplin, which will benefit that city's tornado relief fund.