09/23/11
5:46
PM ET
Putting a basketball game on an aircraft carrier sounds like a cool event, something unique to punctuate the start of the college basketball season.

But this is much more than a gimmick on 11-11-11 -- much more than merely a game to showcase top-ranked North Carolina and perennial contender Michigan State.

Understand that this event would not have happened without the full cooperation of the United States Navy. The USS Carl Vinson was chosen as the host carrier, less than seven months removed from being the final resting place of the most sought-after war criminal since World War II, Osama Bin Laden, whose body was dumped into the sea off the deck of the Vinson. 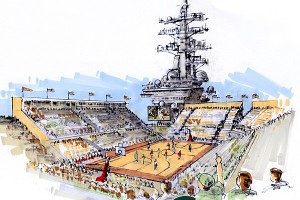 AP Photo/Andy Warfal, Morale Entertainment FoundationA temporary stadium that seats around 7,000 will be built on the flight deck of the USS Carl Vinson.

The idea, originally hatched by Michigan State athletic director Mark Hollis, had to be embraced by the Navy once it was formulated by Mike Whalen and his team at Morale Entertainment Foundation. Whalen is well-connected, counts plenty of former congressmen and Pentagon officials as friends and can certainly talk his way into getting what he wants when he wants it.

But this is no small feat.

"It's an incredible undertaking," said Rear Admiral Denny Moynihan, who has been the Navy's point person on the project. "Nobody has ever done this before. We're working through the logistical and legality of how we can do it as best we can."

Moynihan emphasized that the event will not cost the American taxpayers.

"This is costing money, but not a cost on taxpayers," he said. "And this will not have an operational impact. We're not keeping this ship from deployment to hold a basketball game."

Whalen said sponsorship dollars (Quicken Loans is the title sponsor), advertising and grants are paying for the event.

The Carl Vinson is on deployment now doing routine operations. It's due back in port off the coast of San Diego in time for the game, as Moynihan said a two-week window for staging setup and tear down is needed.

"If the Carl Vinson is needed between now and Veterans Day, then we'll have to find another place to play the game," Moynihan said. "We needed to make sure there was no operational impact to play the game. We can't release future operations, but it will be involved in deployment after the game."

Whalen said his agreement is to be on the ship by Nov. 1 and off by Nov. 14 or 15. The plan is for a mini-stadium to be built on the deck with lights, scoreboard and more. If weather is a major issue, then the game would be moved to the hanger below. Tipoff time is set for 4:15 p.m. PST.

The commitment is for a total of 7,000 people to witness the game: 3,000 active sailors; 500 from other branches like the Marines, Air Force and Coast Guard; veterans and retirees; those involved with the Wounded Warrior project, the San Diego Sports Commission, sponsors, Morale Entertainment and ESPN, which is televising the game. North Carolina and Michigan State are allowed 750 fans each.

Will it be a little hectic? Perhaps. But Moynihan is confident that enough preparation has gone in to the planning process that things should run fairly smoothly. 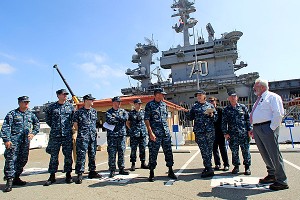 AP Photo/Lenny IgnelziMike Whalen (right) is in charge of the group organizing this unprecedented event.

"This ship is for launching jets and recovering jets and is used to doing big things at sea," Moynihan said. "That crew has never done this before, never something like this. I know the people doing the event [Morale] put together big events, but never on a carrier. There are lot of people making sure the legal pieces are right and the ethics are done properly."

Moynihan said the morale boost to the sailors will be significant. Toss in famous programs like UNC and Michigan State, famous coaches like Roy Williams and Tom Izzo, and the fact this game will be on Veterans Day on a memorable 11-11-11 date. It all adds up to what should be a truly special week off the California coast.

"This will be a huge boost for morale and we're hopeful that the two teams will be able to interact with everyone on the ship," Moynihan said. "There will be a lot of hard work put in to get the ship ready and hopefully they can rub elbows with people like Coach Izzo and Coach Williams. We're hoping that people will get a chance to learn about what an aircraft carrier does for the nation while also watching a basketball game.

"This game is a celebration of service for all veterans. This is a great opportunity for the Navy to expose people to what an aircraft carrier does and can do."

Connecticut and Arizona have committed to playing in the event in 2012. Moynihan and Whalen are both hoping this becomes an annual event.

"We're honoring our veterans that night," Moynihan said. "This is a unique opportunity to be the first college basketball game of the season, on a Friday night on Veterans Day."