Anthony Davis should be POY front-runner 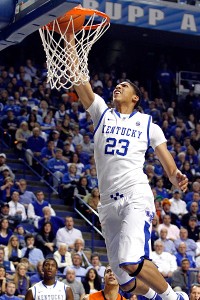 AP Photo/James CrispFreshman forward Anthony Davis "changes the game for everybody, for our team, for everybody," says Kentucky coach John Calipari.

Kentucky coach John Calipari said Monday, "He changes the game for everybody, for our team, for everybody. He does it without changing his demeanor. He doesn't have a selfish bone in his body. That's what makes him the most valuable player out there."

• When asked about Illinois coach Bruce Weber's job security, Illini athletic director Mike Thomas gave the standard response about evaluating the entire program, like he would for all 18 sports, at the end of the season. That doesn't necessarily sound like he's backing Weber.

One source close to the situation said Weber has had a good relationship with Thomas and that Thomas hasn't given him any indication that he's out.

Know this: Weber is a genuinely nice man. He attempts to do everything the right way. He coached the 2005 Illinois team exceptionally well and was within five minutes of a national title in St. Louis. The program has been on and off the bubble ever since, it seems.

The best-case scenario at some point may be if Weber moved on, on his own, for a fresh start. Regardless of what occurs in 2012-13, the Illini have enough talent to be an elite Big Ten team next season. That's of course if Meyers Leonard decides to stay put.

• Staying too long in one place isn't a false theory. That's why some coaches may regret not jumping when they had the chance. Weber may be one of them. Jim Baron at Rhode Island could be another.

• I won't be surprised if Northwestern's Bill Carmody leaves even if the Wildcats make the NCAA tournament for the first time ever. Carmody has put every ounce of his sweat into trying to get this program into the tournament. He constantly looks like the weight of the world is on his shoulders. If he doesn't make the tournament, there's nothing wrong with knowing he gave it everything he had and the program never quite got over the hump. The Wildcats have to win a few key upcoming home games to try to influence the committee that they are worthy. Of course, if Carmody were to finally break through and make the NCAAs, the recruiting may go to another level and he would have to stay. But at Northwestern, just making the tournament would qualify as enough for him to move on.

• The BracketBuster games looked tantalizing good a few weeks ago. But losses by Nevada, Iona, Creighton, Murray State and Saint Mary's have lowered the interest/importance a tad. The hottest teams since the matchups were announced are Long Beach State, Wichita State, Drexel and VCU. If you could reseed and have those four teams play in some form, that would still provide plenty of pop. Long Beach State is at Creighton, Wichita at Davidson, Drexel at Cleveland State and VCU hosts Northern Iowa. The Saint Mary's-Murray State game still has enormous value for the Racers. A win and everyone will settle down a bit about the Racers' at-large hopes. A loss and suddenly they are tossed back into the pool. The expectations for these teams to run the table from the moment the matchups are announced is simply an unfair expectation.

• I don't think I've ever picked a team in November to make the Final Four and then not have that squad even make the NCAA tournament. Xavier could be the first.

• There is a strong chance multiple teams from power six conferences will have double-digit conference wins and not get bids. This is the repercussion of having unbalanced schedules. Two teams to watch for this are South Florida and NC State. The coaches know they can't complain about winning 10 games in the Big East or ACC if they didn't beat any of the top four teams in the conference.

• Valparaiso coach Bryce Drew won't win national coach of the year. But he better win the Horizon League honor. I saw this team in an exhibition game in November. There was no reason to suspect the Crusaders would be leading the Horizon and on their way to a possible NCAA tournament berth. If you had to take which Drew brother would be in first place on Feb. 13 in his respective conference, it wouldn't have been close. Scott Drew of Baylor would have been the choice.

• San Diego State's new rival in the Big West in 2013 will be Long Beach State. But the games simply won't feel as grand as when the Aztecs play UNLV. Everyone squawks about Missouri and Kansas playing in the future. Well, SDSU and UNLV should continue their series, as well. It's regional, easy travel and both programs are going to stay at a high level for the near future.

• Murray State has tremendous respect among the coaches to only fall seven spots to No. 14 in the ESPN/USA Today poll after losing at home to Tennessee State. But what about Wichita State? The Shockers got no respect from the coaches after rocking Creighton in Omaha and establishing themselves as the premier team in the Valley. Wichita wasn't in the Top 25 released Monday.