But Drexel may end up having the most important game of the weekend.

The Dragons are tied with George Mason for first place at 14-2 in the Colonial Athletic Association. Drexel (22-5 overall) has been one of the hottest teams in the country, losing just once since Dec. 3 (by 14 at Georgia State). That's 14 straight wins and 20 out of 21.

Drexel is at Cleveland State on Saturday, the second-place team in the Horizon League behind Valparaiso.

If Drexel wins this road game, it will be akin to George Mason and VCU winning at Wichita State in the BracketBusters event in 2006 and 2011, respectively. Both teams received an at-large berth and ultimately went to the Final Four.

Drexel won't need an at-large berth if it wins the CAA tournament. But beating Cleveland State on the road will certainly help the résumé. 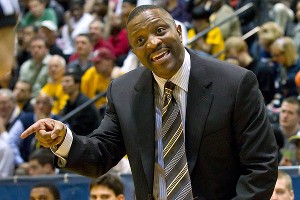 Christopher Szagola/US PresswireBruiser Flint's Drexel squad has won 20 of its past 21 games this season.

Drexel coach Bruiser Flint said he would be surprised if his team isn't in the NCAA tournament.

But Flint isn't denying this game could be decisive for the Dragons.

"The eye test is big for us in this BracketBusters game," Flint said. "We need to go out and play well and get a win. It's not going to be easy."

Flint said he received tongue-in-cheek text messages from former CAA coaches Tom Pecora (then of Hofstra and now of Fordham) and Jim Larranaga (then of George Mason and now of Miami) encouraging Flint to finally get a bid.

The only team not from the state of Virginia that has won the CAA is UNC Wilmington and former member Navy.

"It's been hard, since Old Dominion, VCU and George Mason have great tradition," Flint said. "Those teams are really good. They've been able to dominate the league. You've got to give them credit.

"But the championship and conference is in Richmond and VCU is down the street, so it's a home game and Old Dominion gets a great crowd," Flint said. "There has been a big three."

After being forced out at UMass, Flint bounced back and was hired right away at Drexel in the spring of 2001. He had an impossible task at UMass, following John Calipari in 1996 after a Final Four berth. Four years later, Flint had another tall order: take over a hometown school in Drexel. The Dragons have four NIT appearances under Flint, but no NCAA berths.

"I've been in this league now 11 years, and people don't realize that we have the fourth-most wins since the merger," Flint said. "Me and [ODU coach] Blaine Taylor are the only ones left since the merger. It's been a long process."

Flint said that when he took the job he had no idea the Dragons were moving into the CAA.

"I didn't expect this league to be as good as it turned out to be," Flint said. "It's a really, really good league."

Flint said the CAA has three really strong teams this season, mentioning Drexel in the same sentence as VCU and George Mason. The problem is that none of the teams stood out in the nonconference.

Drexel had injury problems but the defense never wavered. The offense, long an issue for the Dragons, is no longer stagnant.

The Dragons don't have a marquee nonconference win. The only Top 25 team they've played has been Virginia, in the Paradise Jam in the Virgin Islands on Nov. 18 (Drexel lost 49-35).

The Dragons have plenty of options: Chris Fouch is healthy; Frantz Massenat is playing at a CAA Player of the Year level (the award should be his, Flint said); Damion Lee is on the perimeter, balancing out Samme Givens; and Dartaye Ruffin is on the inside.

Calipari, now the head coach at Kentucky, said Thursday that Flint should be coach of the year -- nationally.

"If we can be in the tournament," Flint said. "That would be special."

The quest for a bid could take a decided upward turn Saturday in Cleveland.