No NBA suspense over Kentucky's Davis

05/18/12
10:03
PM ET
New Jersey is hosting a draft combine Saturday and Sunday for mostly second-round and some possible first-round picks.

Minnesota will host a similar event May 30-31 before the NBA takes over for the annual draft camp in Chicago June 6-8.

Here are some consensus comments from NBA personnel: 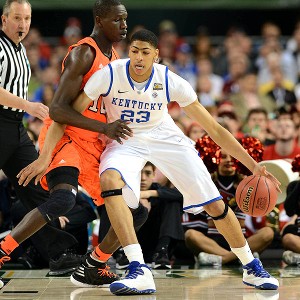 Richard Mackson/US PresswireAnthony Davis will be the first of several Kentucky players who are expected to be NBA draft picks.

• Kentucky's Anthony Davis is so clearly the No. 1 pick that there isn't even a close second. Davis still doesn't have an agent as he works out with Kentucky assistant Kenny Payne. Davis' father, Anthony, said there is no rush. And every team agrees, saying that all Davis needs at this juncture is for someone to work on marketing deals.

• The battle for the second pick is probably between Florida's Bradley Beal and Kentucky's Michael Kidd-Gilchrist. Kidd-Gilchrist's motor has the personnel buzzing. But Beal's physical stature and his ability to make shots mean he's ready to contribute.

• Marquette seems to have a player every year who climbs into the first round and goes higher than projected. That player this year will likely be Jae Crowder.

• A senior who could easily move himself up over the next month is Michigan State's Draymond Green. He'll wow NBA brass during interviews in Chicago.

• Iowa State's Royce White has the talent to be higher, but will teams get over any concern they have with his past?

• Baylor's Quincy Miller could end up being a classic workout wonder who moves up.

• Kentucky's Marquis Teague will climb when teams realize the need for a point guard. Teammates Doron Lamb and Darius Miller will have to work their way into a solid position in the first round.

• The consensus is that this is a deep draft, but teams will be making moves because last season's lockout slowed down the number of transactions at draft time.

• The opinions on the players outside of Davis are as wide as we've seen during the draft.

• East Coast and Midwest evaluators are a bit more pro-Waiters, while those on the West Coast have an affinity for Ross.

• There are some who are heavy in the Rivers camp. And there are others who are lukewarm.

• Disregard the enigmatic seasons by Jones III, Drummond and Leonard. They will go higher than projected. As is always the case, these players will be selected on size and untapped ability over productivity.

• Moultrie may have the best chance to move up.

• The battle between Marshall and Lillard will be intriguing to watch. They are viewed as the top two lead guards in the lottery.

• The combination of the lockout forcing a later draft camp date and the first year no underclassmen can test the draft (even for just two weeks) means that NBA personnel will be relying more than ever on in-season scouting. There will be a mad rush on workouts post-Chicago, but decisions will need to be made earlier, and it could lead to more trades on draft night.