But he sees a void on the team that will be a question mark heading into the summer and preseason practice in the fall: Who will replace Doron Lamb on the perimeter? 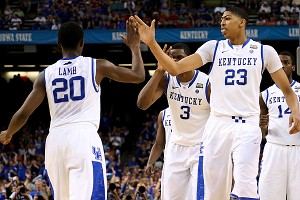 The national champions seem to have replaced every position in some form with the exception being Lamb, the lock-down shooter who provided a lift throughout the season and during the NCAA title run.

"They don't have that," said Davis as he stood on the Joe Craft Center practice court after a draft workout with former Kentucky manager Will Martin. "I could throw it to him, and he would make a shot. That won't happen. There will be a lot of guys who can shoot the ball, but not as consistent as Doron [did] last year.

Davis is referencing the potential perimeter shooting of face-up forward Kyle Wiltjer, the top returning player on the team, as well as guards Ryan Harrow and Twany Beckham. Harrow sat out last season after transferring from NC State. He is expected to play the lead guard role in replacing Marquis Teague. Beckham played in only 16 games.

"Ryan Harrow is a great player, and he can beat his guys off the dribble," Davis said. "He can really pass. Twany can be a great defender. Kyle will make some shots and Ryan can too."

The uncertainty of the perimeter shooting means freshman guard Archie Goodwin will have plenty of opportunities to make his mark early and often.

"He is a great ball handler and a shooter and can attack the basket," Davis said.

The Wildcats' strength will have to come inside with the addition of Noel and small forward Alex Poythress. Willie Cauley -- who, like Noel, is 6-foot-10 and adds much-needed size and length -- could also contribute.

Davis said he didn't play with any of the recruits but has seen them perform in various all-star games.

Davis said he envisions Poythress mimicking the work ethic and motor of Michael Kidd-Gilchrist, a player who can get to the rim when a play gets disrupted and make something happen.

"He'll be the next Michael here; he has great energy and has an explosive first step," Davis said.

Davis had a savvy assessment on this next crew.

No one is anticipating that Kentucky will be able to duplicate last season's title run.

Losing the experience of Lamb, Terrence Jones and senior Darius Miller will be tough to replace. The latter two had size and thickness that made them tough to defend for opposing players.

This will be coach John Calipari's least experienced team in his four seasons in Lexington. The Wildcats will still be a top-10 team to start the season, but they'll go through the natural ups and downs that is to be expected for a young but talented crew.